U.S. Treasury yields trended lower this week as investors digested mixed signals from the economy and earnings reports. The 10-year yield has fallen to around 4% as of writing after topping 4.3% late last week. Equities were trekked higher, with the S&P 500 looking to end the week up about 2.9% as at the time of writing.

The U.S. economy left behind the negative prints recorded in the first half of the year, with growth accelerating to 2.6% annualized (ann.) in the third quarter – a touch higher than market expectations (2.3%). However, the headline number was flattered by an outsized gain in net exports (Chart 1). Meanwhile, private domestic drivers were largely unchanged, adding only 0.1 percentage points (pp) to headline growth – down from 0.5 pp in the second quarter. Consumer spending remained supportive, but its contribution to growth diminished in light of elevated inflation and a higher interest rate environment. Consumers continued to tap into the pent-up demand for services (up 2.8% ann.), while pulling back on goods – declined by 1.2%. 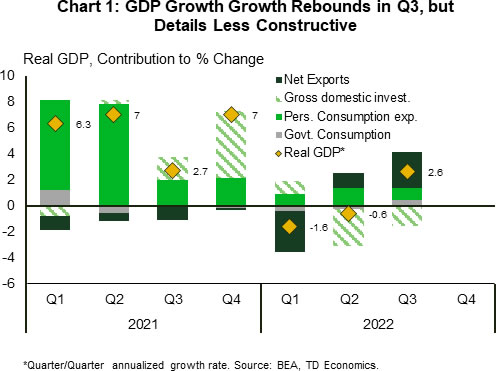 The weakest area weighing on domestic demand was residential investment, which fell 26% (ann.), marking the sixth consecutive quarterly decline. Outside of the pandemic, this was the largest quarterly decline since the start of 2010. The outsized pullback was the result of sharp declines in homes sales and residential construction through the third quarter, as higher interest rates have tighten the grip on the housing sector.

Housing is one of the most interest-sensitive areas of the economy and with rates elevated – with the 30-year fixed mortgage rate currently sitting at 7.1% – it is likely that there will be more weakness over the coming months. Several recent indicators support this view. Pending home sales, a leading indicator of existing home sales, fell by a massive 10.2% m/m in September. Meanwhile, mortgage applications to purchase a home dropped 2% last week from the week prior, and were 42% lower than a year ago.

The housing market is also central to the Fed’s rate setting calculus. Market data tells us that rent growth is decelerating and that home prices are falling. However, as we explain in a recent note, market price changes take time to filter down to their corresponding inflation metrics, which means that shelter inflation is likely to continue to push up on core inflation over the next several months. This may be less of an issue for the Fed’s preferred inflation gauge, Core PCE – which accelerated to 5.1% Y/Y in September (Chart 2) – where shelter carries a lower weight than CPI (see here for differences). However, CPI gets released ahead of PCE, grabbing the market’s focus and adding to the Fed’s communication challenge. 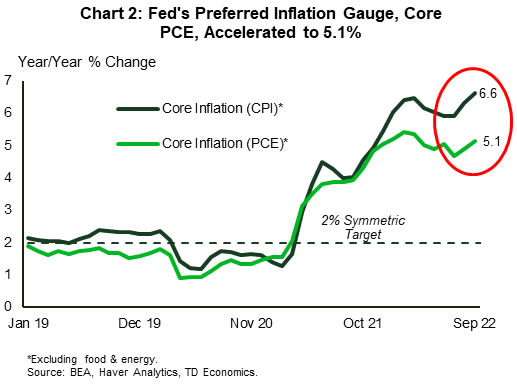 The bottom line is that if the Fed does not pivot toward a more forward-looking stance, the result will be a more restrictive monetary policy than otherwise required, increasing the chances of a policy ‘error’. While the Fed will likely deliver on another 75-basis point hike next week, we expect the FOMC to soon start to pivot on its communication as the Fed will need to dial back on the pace of rate hikes.

Canada – BoC Eases Up on the Brakes

This week may have started with fireworks to celebrate Diwali, but the Bank of Canada (BoC) had some fireworks of its own by raising rates less than forecasters were expecting at their Wednesday meeting. The BoC raised its key overnight lending rate by half a percentage point to 3.75% — the highest rate in nearly 15 years. Markets had been expecting a larger 75 basis point increase given the central bank’s previously stated resolve on bringing inflation back to target.

The BoC’s accompanying Monetary Policy Report (MPR) laid out some compelling reasons why the bank opted for a large 50 basis point hike rather than a supersized 75 basis-point one. The Bank downgraded its growth forecasts across the board for 2023 (Chart 1). Global growth in 2023 was knocked back by 0.4 percentage points, but Canada and the U.S. were cut by about a full percentage point each. On net, this left the level of output about 1.5% lower by the end of 2024. Translation: demand is a lot weaker than the bank expected three months ago, which reduces a source of inflationary pressure. Not surprisingly, the bank also reduced its inflation forecast for 2023 from 4.6% to 4.1%. 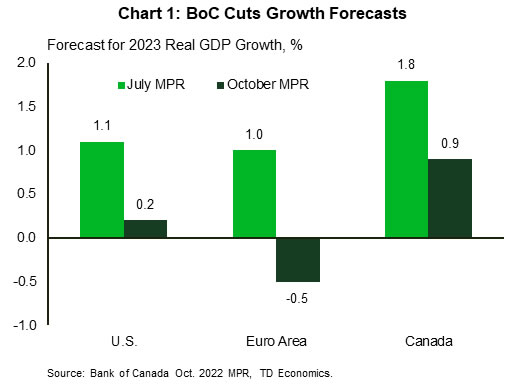 While the BoC did not use the word recession – either in the MPR or in the press conference – it did say growth is expected to stall over the next few quarters. Specifically, real GDP growth is expected to run between 0-0.5% from Q4 of this year through the first half of next year and “suggests that a couple of quarters with growth slightly below zero is just as likely as a couple of quarters with small positive growth.”

Looking at the Bank’s forecast shifts from this year to next, the slowdown in consumer spending looms largest (Chart 2). The MPR stated that consumer spending is forecast to contract for three quarters, starting in the fourth quarter of this year, as higher interest rates weigh on spending. The Bank also cited decreasing house prices, the decline in financial wealth, and deterioration in consumer confidence is restraining consumer spending, which has never happened outside of a recession. 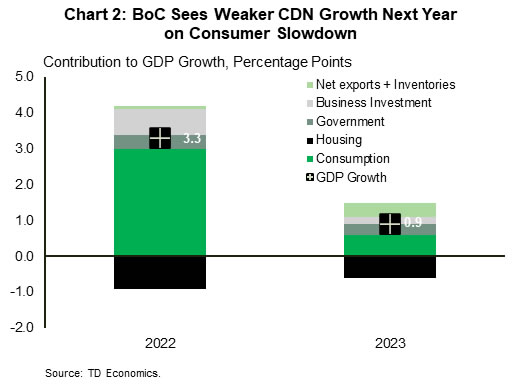 The good news in all of this is that the bank expects this slower growth environment to bring inflation pressures down to within its 1-3% target range by the end of next year. That is earlier than it had expected in July. As Governor Macklem emphasized in the press conference, with inflation getting to a 40-year high in the aftermath of the pandemic, there is no easy way out to restore price stability. It is clearly going to be a tough period of adjustment for Canada’s economy to bring inflation back down to target.

The overarching story of an economic slowdown in Canada was supported by the August GDP by industry data. It showed the economy grew at a modest 0.1% month/month pace, and Statistics Canada estimates that September will progress at a similar clip (although these estimates haven’t been too accurate lately). However, the Bank is going to need to take rates just a bit higher to achieve the necessary slowing to rein in inflation.