The Weekly Bottom Line: The Economy Holds on as Rate Hikes Start to Bite

U.S. – The Job Market Marches On

Markets had to hit the ground running after the Thanksgiving holiday, with a full slate of economic data and news. The November jobs report, personal income and spending data for October, and FOMC Chair Powell’s speech on Wednesday were just the headliners. Markets rallied to start the week, but gains were pared back after the release of the November jobs report on Friday. At the time of writing, the S&P 500 is up 0.3% on the week while the ten-year yield is down 10bps to 3.59%. 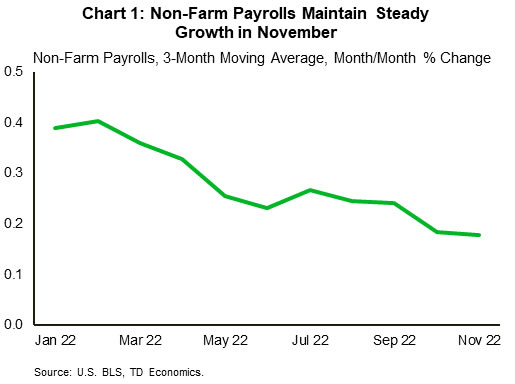 Oil prices rose this week after Chinese officials eased up on their Zero-Covid messaging in the wake of wide-spread protests. With health protocols expected to be loosened heading into 2023, the prospect of renewed Chinese demand drove oil prices higher. Looking to next week, OPEC+ will have its bi-monthly meeting on Sunday after previously cutting production by 2 million barrels per day in October. The following day, the EU will implement its embargo on Russian oil. European officials also recently announced a $60 per barrel price cap on Russian oil, which they intend to implement in coordination with the G7 and Australia on the same day their embargo goes into effect. Overall, bullish sentiments linger in the oil market as we head into the final month of the year.

Personal income saw a healthy gain in October (+0.7% m/m), driven by strong growth in employee compensation (0.5% m/m) alongside one-time refundable tax credits issued by states. Consumers were keen to spend those gains, with spending rising even more (+0.8% m/m). That took the consumer savings rate to a 17-year low of 2.3%. It wasn’t all inflation either. Controlling for taxes and inflation, income rose 0.4% m/m. Real spending was up a healthy 0.5% m/m, which puts third quarter consumer spending on track for a healthy gain. Headline PCE inflation fell 0.2 percentage-points (ppts) to 6% y/y (Chart 2) while the Fed’s preferred core PCE measure fell 0.1ppts to 5% y/y. 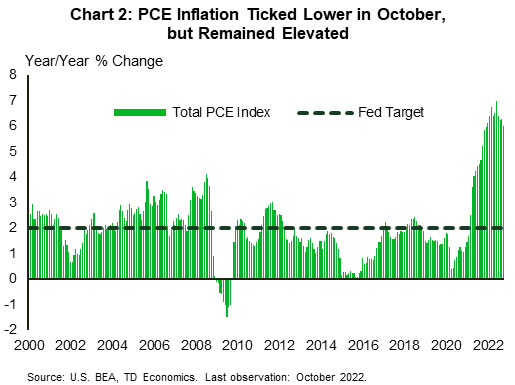 Earlier in the week we heard from Chair Powell for the first time since the November FOMC meeting. His remarks were little changed overall, but markets reacted strongly to his statement that “the time for moderating the pace of rate increases may come as soon as the December meeting”. This reaction, however, overlooked his reiteration that the FOMC has “a long way to go in restoring price stability” and that this will likely require “holding policy at a restrictive level for some time”. Coupled with his insistence that the FOMC will need to see “substantially more evidence to give comfort that inflation is actually declining” alongside the strong November jobs report, it is fair to say that their job is far from done.

Canada – The Economy Holds on as Rate Hikes Start to Bite

This week saw Canada’s third quarter GDP clock in higher than expected, rising 2.9% quarter-on-quarter (q/q) at an annualized rate. The print was nearly double consensus expectations, powered by an 8% pickup in exports and inventory building. Certainly a pleasant surprise, but some of the details in the report and October’s flash print are cause for concern.

Just below the headline numbers the impact of rising interest rates on household spending and residential real estate investment is glaring. Consumer expenditures fell 1% in the quarter, as households pulled back on buying big ticket items like furniture and cars. An uptick in services spending managed to offset some of the losses. As rates pushed higher, residential investment also contracted – dropping 15.4% q/q (annualized). These trends are set to continue as the Bank of Canada (BoC) continues its rate hikes.

The BoC has hiked its policy rate 350 basis points since February – with more than half of that happening since June this year (Chart 1). We also know the BoC will continue its rate hiking cycle as it tries to stamp out inflation. What’s important to remember is that it usually takes time for the economy to respond to higher rates, so it’s likely that most of the hikes will only start to be felt in 2023. That said, given the rapidly tightening monetary conditions and the highly leveraged state of Canadian households’ balance sheets, October’s GDP flash estimate that showed no growth is not much of a surprise. 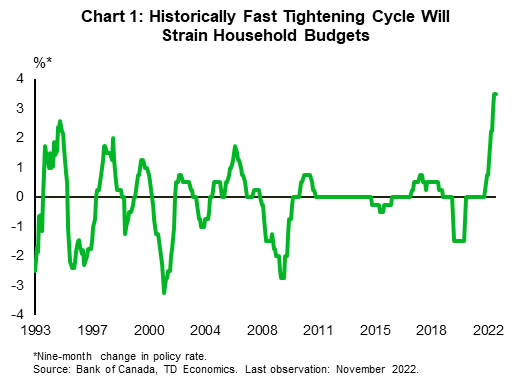 So far, the labour market remains tight. November saw another 10k net new jobs added. The numbers were heavily skewed to full-time work with just over 50k new positions, while 41k part-time positions were shed. Despite the fact that job creation slowed from over 100k last month, the drop in the labour force participation rate meant that there were fewer people looking for work. This helped bring the unemployment rate down to 5.1% from 5.2% the month prior. The relative scarcity of workers continues to be reflected in the strong wage growth as average hourly earnings for permanent workers ticked up 5.4% y/y – albeit a slightly slower pace than the 5.5% registered the month prior.

However, wage growth appears to be slowing rapidly. The three-month annualized growth rate has now dipped to 3.5%, falling well below the annual rate and continuing a trend that started in September (Chart 2). Although downward pressure on real incomes will hurt households, the BoC will be reassured that a wage-price spiral has yet to materialize. 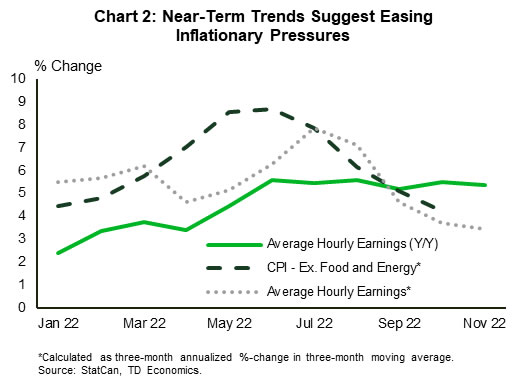 Looking ahead, the BoC will continue with its rate hikes next week. Although CPI inflation is slowing, it is still well above the target range. The labour market remains historically tight as labour force participation rate has fallen relative to last year. With indications of slowing demand and inflation emerging, we expect the BoC to end its rate hiking cycle early next year. However, the lag between rate hikes and their impact on economic activity means the full force of higher interest rates will only be felt next year.