Could the UK Data Releases Change the BoE’s Thinking?

Pound followers are preparing for an action-packed week ahead of the festive lull. With the Bank of England MPC meeting held on December 15, the market will be updated on the underlying economic trends that could be critical for the size of the expected rate move. Could the data releases tempt Bailey et al to announce a bigger rate hike and potentially boost the pound?

Labour market, average earnings and inflation data releases set the scene for an exciting start to the week as the market is focused on the final gatherings of the major central banks for 2022. Naturally, central bankers attach extra importance to these data, especially the inflation prints, to avoid a potential policy mistake amidst a traditionally lower liquidity period. Since the November 3 meeting, when the MPC raised rates by 75bps, the UK data has been on the weak side. The upside surprise at the third quarter GDP was overshadowed by record-high inflation, as the October CPI print reached 11.1% year-on-year. Similarly, the PMIs showed some marginal improvement for November, but the October retail sales YoY remained firmly in negative territory, with hopes for a recovery pinned on the festive shop offers. Additionally, the weakness in the housing sector is becoming more widespread, as evident from the various house price indicators. 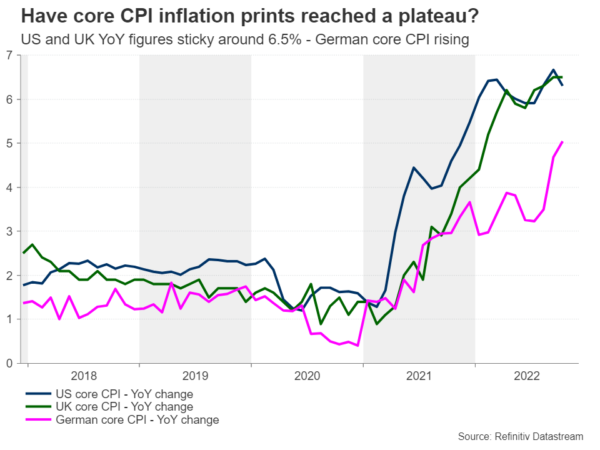 On December 13, October average earnings excluding bonuses is forecast at 5.5% YoY while the October unemployment rate should print at 3.5%, remaining at record low levels. The following day, the November CPI is seen easing to 10.9% YoY with the core CPI expected to come at 6.5% YoY. These forecasts seem in line with the November inflation prints in other regions, providing a very small breathing space to central bankers globally. Nevertheless, Governor Bailey will be forced to write another letter to the Chancellor of the Exchequer detailing the reasons for the current high inflation rate and, particularly, the stickiness seen at the core CPI indicator.

Could the data tilt the BoE market pricing?

The MPC prepares for the December 15 meeting, a day after the Fed meeting. The current market pricing leaves a small window for surprises as the probability of a 50bps rate hike is 90%, with the remaining 10% pointing to another 75bps hike. In the meantime, the rhetoric from the various MPC members remains hawkish, but a particular comment from the Chief Economist Pill on November 30 stands out. He mentioned that inflation is expected to rapidly fall in the second half of 2023. This means that should inflation instead continue to surprise on the upside, the MPC could be ready to hike more aggressively than currently envisaged.

Will the pound react to the data releases?

It has been a one-way street since September 26 when pound/dollar printed 1.0325, a multi-decade low. Since then, the pound bulls have pushed the pair higher, recovering a good part of the 2022 depreciation of the pound against the dollar. The pair currently trades at the 1.2200 area. An upside surprise in the aforementioned data could push pound/dollar above the December high of 1.2344 towards the 1.2633-1.2750 area, where the May 5 high and the 61.8% Fibonacci retracement level of the June 1 – September 26 downtrend reside respectively. On the other hand, the pound bears would aim for the 200-day simple moving average at 1.2109, followed by the 38.2% Fibonacci level of 1.1824. 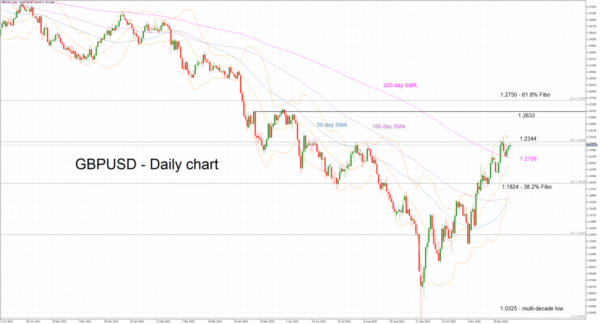