Action Forex
HomeContributorsFundamental AnalysisKey UK Data This Week; Could the Rally in Equities be Supported?

Key UK Data This Week; Could the Rally in Equities be Supported?

With the Bank of England meeting scheduled in less than three weeks, pound followers will be enlightened on the underlying currents of the UK economy. Labour market statistics, inflation figures and retail sales data create a colourful mosaic in this third trading week of the new year. Every data point matters as the market tries to make up its mind regarding the monetary policy outlook.

The data releases in the UK since the dawn of the new year have been mixed. For example, the housing sector continues to create concerns as house prices seem to be on an aggressive downward trend. Equally important, the production data for November were disappointing. A 5.1% year-on-year drop in industrial output, led by a sizeable drop in the manufacturing sector output, is a strong indication that the recession expectations from professional forecasters cannot be easily dismissed as pessimistic thinking.

On Tuesday morning the November labour market statistics will be published. The unemployment rate is expected, according to the Reuters poll, to remain at the record low level of 3.7% while employment is set to record another monthly increase. Total employment is still 300k below the January 2020 peak meaning that the Covid impact has not been negated yet. Additionally, headline average weekly earnings are expected to remain stable at 6.1% YoY change while excluding bonuses, the indicator is seen rising to 6.3% YoY. These indicators exhibit a different pattern to their US counterparty. While direct comparisons are not possible due the different nature of the two data sets, there is an evident divergence in their recent trend. On face value, this could potentially force the BoE to further tighten its monetary policy stance during a period that other key central banks could be pausing for reevaluation. 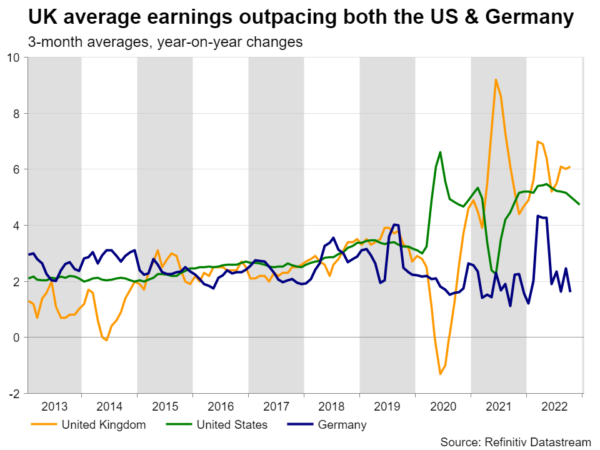 Moving to Wednesday, and amidst the market evaluating the likely BoJ announcements, the December inflation details will be released.  Contrary to the US numbers last week confirming a relaxation of the inflation pressures, the UK figures are not expected to change dramatically. Both the headline and core CPI are seen stable at stubbornly higher levels of 10.6% YoY and 6.3% YoY respectively. It would be interesting if these projections are indeed confirmed. This could mean that contrary to its main trading partners, the UK might not have seen the peak in inflation. 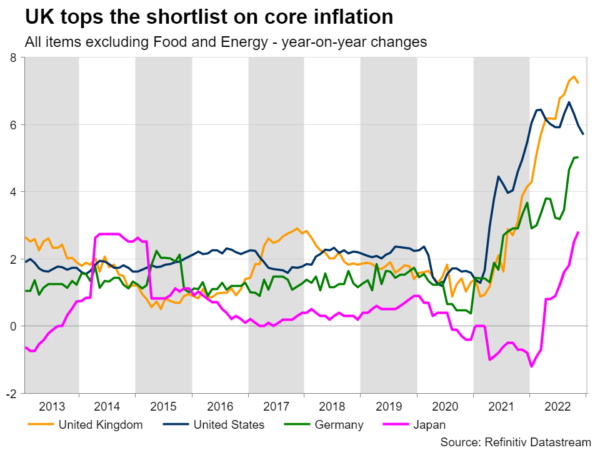 Finally, on Friday we get a look at the December retail sales. The BRC/KPMG retail sales monitor for December showed a 6.5% YoY increase as the monthly retail sales figures are expected to record a positive month-on-month change. There are methodological differences in the compilation of these series, but there seems to be a growing gap among these two indicators that has not been present in the recent past. This could imply a potential upside surprise at Friday’s release especially if we factor in the strong November Consumer Credit data.

What does this all mean for the Bank of England?

The BoE faces a tough challenge. It is the only central bank facing double-digit headline inflation and the strongest core inflation among the key developed economies. And this occurs amidst the UK government’s effort to stabilize public finances after three years of increased spending due to the Covid pandemic and the political shenanigans. A strong set of economic data this week could potentially force Bailey et al to move even more aggressively than the current market pricing of almost 100 bps of rate hikes until the August meeting. On the other hand, if CPI makes a much-sought dip, the BoE doves could try to push for the more causal 25 bps steps going forward.

The UK 100 cash index has moved in sync with other European stock markets in enjoying a bright start of 2023. It currently hovers around the higher level since May 23, 2018 completely wiping out the Covid correction, and it is just a tad below the May 22, 2018 all-time high of 7,902. The angle of the move since October 13, 2022 low of 6,705 has been on the aggressive side hence potentially increasing the chances of a possible correction ahead. At the moment the momentum indicators appear supportive of the move higher, but caution is warranted. 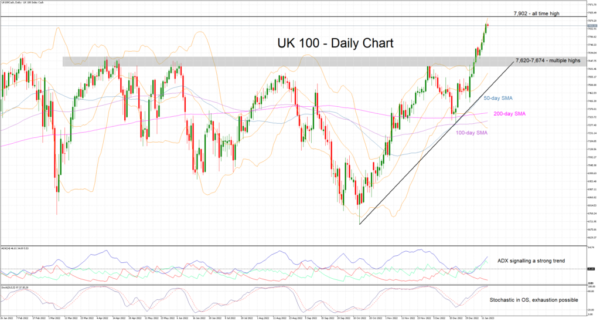