The central issue for the economies and markets will be the evolution of inflation over 2023.

Westpac forecasts that headline inflation in Australia will peak at 7.4% in 2022 (December quarterly result to be released on January 25).

That read will be an increase from 6.3% in the year to June 2022. We expect headline inflation in 2023 to slow to 3.7% – well below the Reserve Bank’s current forecast of 4.7%, although it is likely that the RBA will lower its forecast in the February Statement on Monetary Policy.

While lower than the current official forecast the annual print in 2023 will still be well above the Bank’s 2–3% target range, most likely precluding it from easing policy anytime in 2023.

With inflation running well above the target range it seems it will be reluctant to ease policy during 2023 despite a stagnating economy; a rising unemployment rate and a slowdown in inflation momentum in the second half of 2023.

Figure 1, sets out the forecast contribution to inflation from the key components, highlighting the evolution of those components in 2023. 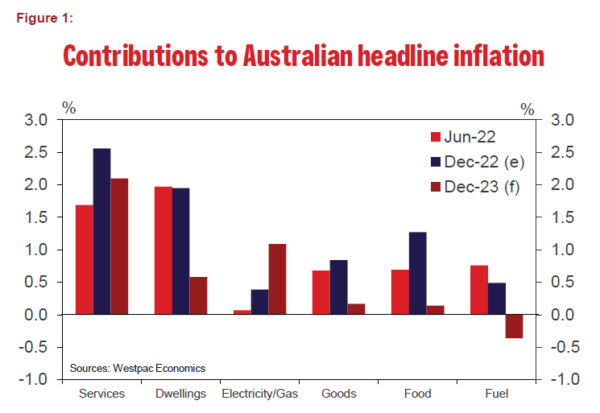 Key factors to note are:

Markets are currently focussing on the theme that global inflation is falling faster than expected and that should be an encouraging signal for central banks.

We agree that inflation relating to supply chains and other supply shocks is largely a global story. Our forecasts for 2023 certainly incorporate those messages – around building costs; fuel; food and goods.

But the demand factors in Australia, largely captured by services, are likely to intensify in the first half of 2023 before easing in the second half.

Those intensifying demand pressures should keep the RBA in tightening mode in the first half of 2023.

The “global theme” is best captured by the inflation developments in the US.

Figure 2, shows our assessments of the contribution to inflation of the comparable components in the US, including estimates of the components making up our (top down) forecast of 2.3% headline inflation for the US in 2023. 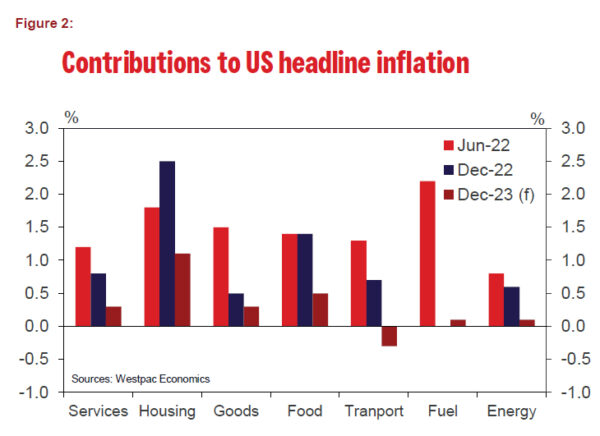 The figure shows that actual headline inflation in the US slowed from 9.1% in June 2022 to 6.5% in December. That compares with our forecast lift in inflation over the same period in Australia from 6.3% to 7.4%.

Some points to note:

Inflation is expected to ease substantially in both Australia and the US in 2023. Supply issues, which represent global pressures, associated with housing; goods; food; and fuel will all generate downward pressure on inflation.

However, the key services inflation cycle looks to be ahead for Australia while it is slowing in the US. Wage inflation in Australia is still lifting as labour markets remain tight through the first half of the year.

Headline inflation in Australia will also be held up in 2023 by rising gas and electricity prices.

The high starting point for inflation and initially slow progress should mean that both the Federal Reserve and RBA have more work to do before remaining on hold in the second half of 2023.

With Australia’s inflation cycle behind the US and both central banks facing much higher, albeit slowing, inflation than their target levels it seems appropriate that they will continue to tighten through the early months of 2023.

On this basis that the demand cycle in Australia is lagging the US it also seems prudent for the RBA to be behind the FOMC on the cycle.

We expect that the FOMC’s tightening cycle will peak at the March FOMC meeting while the RBA will persist for a little longer with the peak being in May.