The week started with a holiday, but that didn’t stop markets from feeling the blues of the most depressing period in the Northern Hemisphere. At the time of writing, equities are down almost 2% on the week. On the political front, concerns about the government’s ability to pay its debts resurfaced as the Treasury Department was forced to begin taking ‘extraordinary measures’ in order to keep paying the government’s bills. By suspending certain additional investments, the Treasury buys Congress more time – likely until June – to negotiate a resolution on how to increase the debt ceiling. With the deadline still several months out, investors’ focus was squarely on the economic data. Unfortunately, there was little to cheer about.

Retail sales came in weaker than expected – falling 1.1% m/m – and marking the second consecutive month of declines. Most major categories were weak in both nominal and inflation adjusted terms. The only group that showed stronger demand was sales at gas stations, where real sales rose five percentage points on a sizeable drop in gas prices (Chart 1). The message is clear: consumers are becoming increasingly more cautious in allocating their income and pandemic savings. Moreover, judging by sales at restaurant and bars, demand for services might also be nearing an inflection point. The soft reading on retail sales led us to adjust our expectations for Q4 consumer spending down to a still robust 2.7% (previously 3.3%). 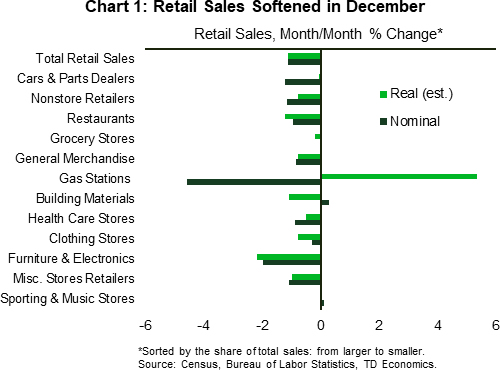 Housing activity also ended 2022 on a soft note. Residential construction declined for the fourth consecutive month, but by less than expected in December. The decline was attributed to a 19% drop in the multi-family segment. In contrast, starts in the single-family, rose for the first time in four months, but are likely to decelerate further in the months ahead as permits continue to trend lower (Chart 2). 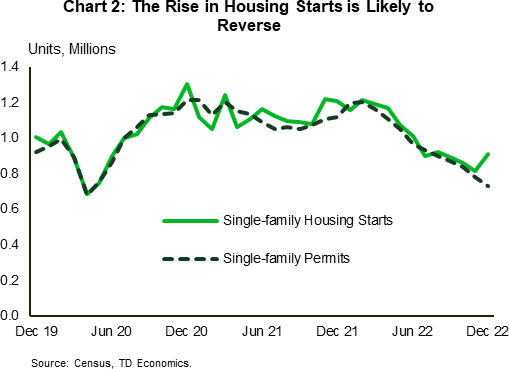 On that note, existing home sales also continued to soften, falling 1.5% m/m December and 17.8% for the year. Despite the sharp decline in sales, prices have only fallen by 1.5%. However, the sharp increase in inventory since August suggests more meaningful downward pressure lies ahead.

Increasingly bold signs of cooling economic activity are welcome news for the Fed on its mission to bring down inflation. That said, this week’s Fed speakers had varying degrees of hawkishness on the pace of upcoming rate hikes. Of those who have the voting rights on the Federal Open Market Committee, James Bullard sounded most hawkish by expressing his preference to “err on the tighter side to get the disinflationary process to take hold”. e

In contrast, Fed’s Lorie Logan and Patrick Harker voiced their support for a 25-basis point hike, while Vice Chair Lael Brainard, without explicitly backing a softer pace, emphasized the possibility of a soft lending – easing in the labor market and reduction in inflation without a significant loss of employment. Markets side with this view, having priced-in a quarter-of-a percent hike on February 1st with a 97% probability. Compare it to exactly one month ago, when only 70% of market participants (including yours truly) expected a downshift. Seemingly, investors express more certainty about an economic slowdown ahead.

With the Bank of Canada (BoC) interest rate announcement next week, all eyes were on December’s Consumer Price Index (CPI) report. The headline reading decelerated to 6.3% year-on-year (y/y), from 6.8% in November. The top-line figure was helped lower by a 13.1% month-on-month fall in gasoline prices, but even stripping out the effects of food and energy prices, inflation decelerated slightly to 5.3% y/y. The Bank of Canada’s core inflation measures also edged down in December.

Despite inflation continuing to register well above the 1-3% target range, the data featured positive developments. In fact, focusing on more recent trends shows that the three-month annualized pace for CPI ex-food and energy slowed substantially, falling to 4.0% from a peak of 7.6% in June (Chart 1). With near-term price gains slowing, this means the annual (y/y) prints will slowly continue to ease – ultimately falling below 3.0% later this year. So, while falling energy prices took the edge off inflation in December, now it is core goods and services price gains that need to cool further to bring inflation back to the BoC’s target. 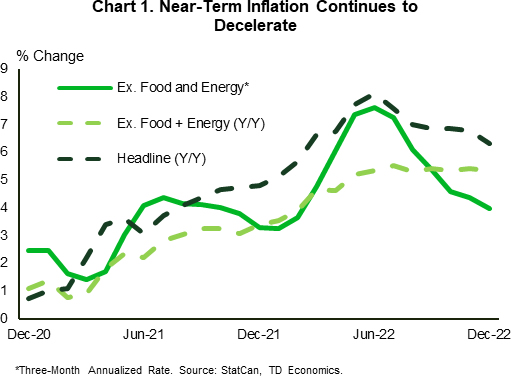 The improved inflation outlook has come with a cost. December housing sales were down 36.4% y/y, lingering at levels last consistently seen in 2003 (Chart 2). Yet, construction activity has remained resilient through the initial slowdown. Although housing starts declined 5% m/m, at 248.6k, they are still well above pre-pandemic norms. This strength is unlikely to persist as higher interest rates sap demand in the housing sector. Our forecast remains that new construction activity should continue to moderate through 2023 and 2024, falling to roughly 200k units by the fourth quarter of 2024. 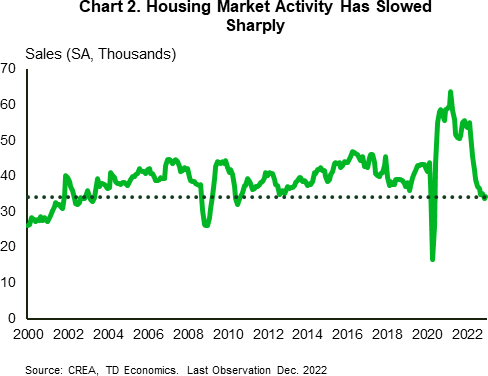 Beyond housing, consumers continue to adjust their spending patterns – shifting from goods to services expenditures. Friday’s retail sales data showed a 0.1% m/m pullback in November’s retail activity (-0.4% in real terms) highlighting the sputtering appetite for goods purchases. A silver lining is that December’s preliminary estimates suggest a 0.5% bounce-back to close out the year. The recovery in December is in line with our estimates  using TD’s internal data. A key finding in our report is that much of the consumer spending growth is being powered by services expenditures, rather than the goods purchases that dominated consumer outlays through the pandemic recovery. Rising interest rates impacting interest rate sensitive goods purchases more than services highlights the transmission mechanism the BoC is relying on to cool demand.

The BoC has some crosscurrents to weigh as it considers its next interest rate move. Inflation has slowed as aggregate demand has weakened amid a barrage of rate hikes, but it remains above target. The Bank doesn’t want to back off until they are confident inflation is coming back down. The recent resiliency of consumers could test the Bank’s plans, but we expect the BoC will raise rates one more time before pausing to evaluate whether enough has been done to ensure inflation will return to its target band.