Could the Australian CPI Further Boost the Aussie?

Amidst a quiet period on the Asian front due to the week-long Spring Festival in China, we get a handful of Australian data this week. Inflation data continues to attract the market’s attention, despite the recent drop in energy prices, amidst mixed expectations for a recession during 2023 at the biggest country of the Australian continent.

With the first RBA meeting for 2023 held in two weeks, the first batch of inflation data will be released on Wednesday. The monthly Consumer Price Index indicator for December is expected to show a year-on-year increase of 7.6%, up from the November print of 7.3% YoY change. In addition, the fourth quarter inflation figures, which tend to be more representative of the underlying pressures, are forecast to confirm a jump in price pressures across the board. Also, on Friday the fourth quarter print for the Producer Price index is expected to fall in line with the remaining data set. 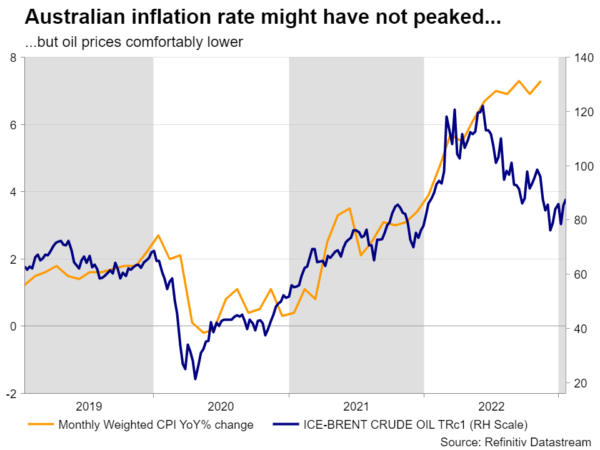 What about the Leading indicator?

On Wednesday morning we get another piece of the economic puzzle. The Westpac/Melbourne Institute Composite Leading indicator, along with the Manufacturing and Services PMIs and the NAB Business surveys, are thought to accurately reflect the economic undercurrents in Australia. Having said that, the former has been flat lining recently, signaling significant downside risk to the fourth quarter GDP released on March 1. 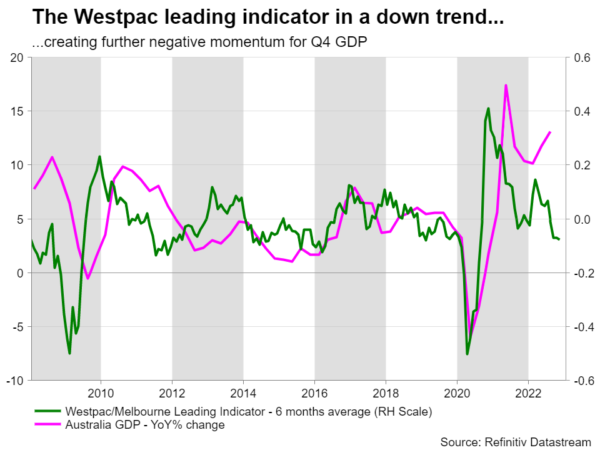 Possible implications for the RBA?

Since the eve of the new year, the economic data releases have been relatively mixed in Australia. Despite inflation pressures remaining elevated, the labour market continues to enjoy a golden period. However, similarly to other regions, the housing sector is showing increasing signs of cracks. The latter is gradually becoming a hot topic among the central bankers, but it appears incapable of forcing the RBA to stop its current hiking cycle. If one adds the Chinese economic reopening to this mixture, it looks increasingly likely that stronger inflation data this week would potentially force the market to further cement expectations of a 25bps rate move on February 7. The current market probability assigned to this move stands at 61%.

Could the aussie get another boost?

Following almost 18 months of weakness, the aussie/dollar pair is staging an aggressive recovery since October 2022. It currently battles with the psychological level of 0.7 having recorded a sizable 3.5% advance in 2023. The recent move can be characterized as aggressive, but the overall technical picture appears to be mostly positive for aussie bulls. Having said that, short-term corrections could be on the cards, but the onus is on the aussie bears to regain market control. 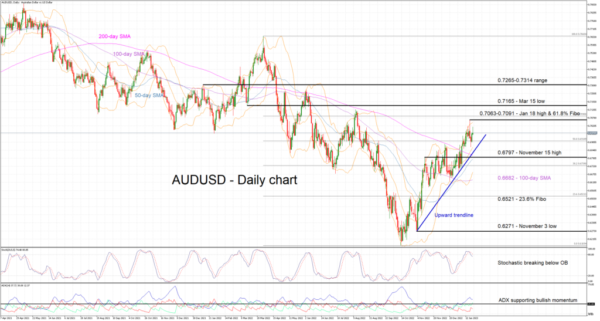