The Reserve Bank of New Zealand (RBNZ) will announce its rate decision on Wednesday at 2000 GMT, and the forecast is for no change in policy. Even though the Bank’s cautiously optimistic bias is unlikely to change drastically amid mixed economic data, policymakers could still express their discomfort with the NZD’s recent surge.

A lot has happened in New Zealand since the RBNZ’s last policy meeting in November, and it will be very interesting to see how the Bank interprets recent developments. In late December, the nation’s statistical service revised its GDP numbers for the previous years significantly higher, raising 2015 growth to 3.6% from 2.4% previously, and 2016 to 4.0%, from 3.0%. Hence, it appears that growth was much faster than what the Bank assumed in recent years. Does that mean the economy is closer to full capacity utilization (and thus higher inflation) than previously anticipated?

In terms of the latest releases, GDP growth was stronger than projected in the third quarter of 2017. However, business sentiment has collapsed recently according to most major surveys. In isolation, this presents a risk that the Bank could revise somewhat lower its near-term GDP forecasts. Turning to inflation, it surprisingly slowed in the fourth quarter, pouring cold water on expectations that the RBNZ could begin to signal rate hikes soon. The yearly CPI rate dropped to 1.6% from 1.9% previously; well below the Bank’s own forecast of 1.8%.

As for the exchange rate, kiwi/dollar is 5.0% higher since the latest gathering. Importantly, it’s now close to levels where the Bank previously threatened to intervene in the FX market to weaken the NZD, as a stronger currency may weigh on exports, growth and inflation. That said, policymakers may not go as far as warn of intervention this time. The broader surge in kiwi/dollar probably reflects more dollar weakness than kiwi strength, not to mention that the NZD has not appreciated nearly as much on a trade-weighted basis. Still, the RBNZ is unlikely to be happy with the whole situation, implying there is a decent probability that it could bring back the sentence it used in previous statements, that “a lower exchange rate is needed”. 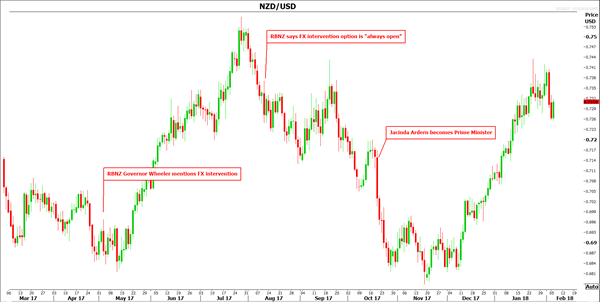 All in all, the negatives seem to outweigh the positives, but not enough for the RBNZ to change its neutral policy language in a material manner. Nonetheless, it may well take the opportunity to jawbone the NZD a little. A statement that expresses discomfort with the exchange rate could weigh on kiwi/dollar, pushing it lower for a test of the 0.7230 support area. A clear break below that territory would open the way for the 0.7135 zone, marked by the lows of January 10.

On the other hand, should the Bank appear content about economic developments, or if it does not toughen its language around the exchange rate, then kiwi/dollar could surge. A decisive break above 0.7330 could set the stage for an extension of the upmove towards the round figure of 0.7400. After that, resistance may be found at 0.7435, marked by the peaks of January 24 and September 20.

Ahead of the RBNZ meeting, NZD-traders will also keep an eye out for New Zealand’s employment data for the fourth quarter, due out on Tuesday at 2145 GMT. Any potential surprise in these data – particularly on the wages front – could influence market expectations regarding the policy decision and thereby, impact kiwi/dollar ahead of the event.

Uncontrollable Coronavirus Spread Could Force the Fed to Resume Easing

RBNZ Orr: Pleasing how resilient New Zealand economy has been