Here are the latest developments in global markets

FOREX: The euro remained under pressure during early European afternoon as Sunday’s elections in Italy which ended to a hung parliament, undermined Eurozone’s prospects, with Eurosceptic parties gaining some ground. However, investors’ confidence on the bloc’s economic performance and an expected grand coalition deal between Merkel’s Conservatives and their previous partners, the SPD, provided some support to the currency, with euro/dollar rising back to 1.2332 before it inched lower to 1.2295 (-0.16%). Euro/yen and euro/pound were down at 129.93 (-0.23%) and 0.8900 respectively (-0.21%). Pound/dollar managed to edge up to a fresh five-day high of 1.3834 (+0.09%) following stronger than expected services PMI readings for the month of February but sentiment on the currency remained weak as investors were waiting for the EU to clarify its Brexit position this week after the UK Prime Minister, Theresa May asked the EU to use a more flexible stance on future negotiations. The dollar index stood at 90.07 and dollar/yen traded lower at 105.62 as investors turned their focus on safer assets amid a potential escalation in trade tensions) between the US trade and the rest of the world. Dollar/loonie gained positive momentum, rallying near to an eight-month high of 1.2928 as Trump’s proposed import tariffs on aluminum and steel were said to complicate NAFTA talks. The US president, Donald Trump tweeted on Monday that “tariffs will only come off if new and fair NAFTA agreement is signed”. Note that the seventh round of NAFTA negotiations concludes today.

STOCKS: European stocks opened higher on Monday after posting losses for four consecutive days. The pan-European STOXX 600 and the blue-chip Euro STOXX 50 were up by 0.66% and 0.54% respectively at 1100 GMT with all sectors being in the green as the political gridlock in Germany came to an end, offsetting losses arising from disappointing Italian elections and Trump’s proposed hefty import tariffs. The German DAX 30 surged by 0.93%, the French CAC 40 rose by 0.50%, and the Spanish IBEX 35 climbed by 0.56%. On the other hand, the Italian FTSE MIB tumbled by 0.58% to six-month lows in the wake of political risks, with the banking sector being set to print its biggest daily loss since May 2017. The UK’s FTSE 100 increased by 0.34%. US stock futures were mixed.

COMMODITIES: Oil prices were moving to the upside but fears of rising US output continued to hold investors cautious, with the International Energy Agency revising the US oil output upwards significantly on Monday and claiming that the US could steal part of OPEC’s market share by 2023. Meanwhile, operations at Libya’s El Sharara oilfield resumed today after a shut down on Sunday due to environmental protests, according to Reuters. WTI crude and Brent were last trading at $61.41.(+0.26%) and $64.40 (+0.06%) respectively. In precious metals, gold held onto gains, fluctuating around $1324/ounce. 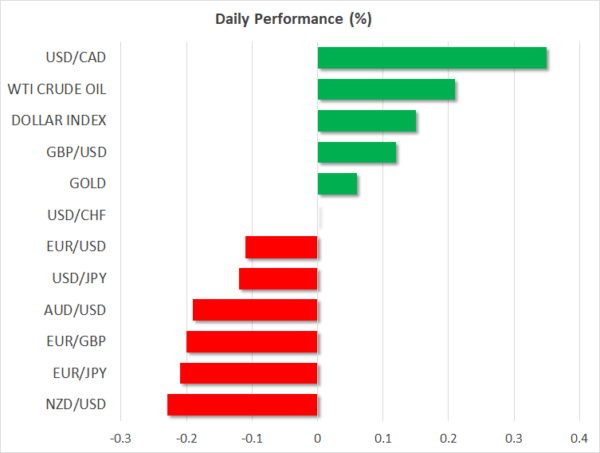 Day ahead: Italian political developments in focus; RBA decides on interest rates during the Asian session

Political updates in Europe will be in the spotlight during the coming days following an inconclusive election in Italy which increased Eurosceptic voices, despite an expected coalition deal in Germany.

On Sunday, Italian exit polls showed that no party had enough votes to form a majority government as anticipated but gave a lead to anti-EU parties, pointing to a period of political instability in the third largest EU economy. The anti-establishment Five Star Movement (M5S) gained 29-32%, above the 20.5% won by the pro-EU center-left Democratic party, while Berlusconi’s center-right Forza Italia and the anti-immigration League party were said to attract only 13-16% of the votes, leaving room to the M5S to negotiate a position in the government. According to the media, the Italian Parliament will meet on March 23, while formal talks are not expected to start until early April. The Italian constitution does not specify any time limit for the parties to deal an agreement or settle new elections.

Brexit uncertainties are also back on the cards and are expected to weigh on market sentiment as the gap between the EU and the UK doesn’t seem to be getting narrower after the UK Prime Minister backed Brexiteers last week, rejecting EU proposals to retain custom union rules in Northern Ireland. However, during her speech on Friday, she expressed some ideas on how to maintain a softer border with the Irish Republic.

Central bank meetings will be of greater interest this week, with the Reserve Bank of Australia being the first in line to decide on interest rates early on Tuesday (0330 GMT). However, for once again policymakers have no intention to tighten monetary policy, keeping rates at a record low of 1.5% given the sluggish inflation and the overloaded household debt. The Bank of Canada, the European Central Bank and the Bank of Japan will announce their own decisions later in the week ahead of the famous US nonfarm payrolls due on Friday.

Concerns over a potential trade war between the US and the rest of the world, triggered by Trump’s announcement of punitive import tariffs on aluminum and steel last week, may continue to restrict any stock market gains. China, the world’s biggest exporter, has already claimed that it doesn’t want a trade war with the US, but it will respond accordingly if the measures harm its interests.

Looking at today’s economic calendar, data releases will be relatively light, with the US reporting ISM non-manufacturing PMI for the month Of February at 1500 GMT. Forecasts are for the index to decline by 0.9 points to 59.0, remaining safely above the threshold of 50 which separates growth from contraction.

As for the speakers, Fed Board member Randal Quarles (voter) is due to deliver remarks at 1815 GMT. In the UK, Finance Minister Philip Hammond will appear before Parliament to discuss the government’s plans for leaving the EU.

In energy markets, a meeting between major US shale firms and OPEC oil ministers will be closely eyed, amid expectations that the two sides could coordinate in order to prevent another oversupply crisis.