Bank of Canada to Stand Pat, May Appear Cautious Amid Trade Risks

The Bank of Canada (BoC) is due to announce its policy decision on Wednesday at 1500 GMT, and expectations are for the Bank to stand pat having raised interest rates at its previous meeting. While markets continue to expect two more hikes by the BoC this year, it will be interesting to see whether officials adopt a more cautious stance, in an environment where recent economic data have softened and the US has announced tariffs that will adversely impact the Canadian economy.

Even as it raised interest rates in January, the BoC appeared quite concerned with trade developments, ending the first paragraph of the statement accompanying that decision with “uncertainty surrounding the future of NAFTA is clouding the economy’s outlook”. The outlook for free trade has worsened significantly since then, as the US recently announced it plans to introduce heavy tariffs on steel and aluminum imports. This is a particularly discouraging development for Canada, which exports nearly 90% of its steel to the US, and accounts for 16% of all US steel imports, the highest of any country.

Meanwhile, Canadian economic data have softened ever since the BoC’s January meeting. On the inflation front, both the headline and the core CPI rates have declined. In terms of economic growth, the economy grew by less than projected in the final quarter of 2017 as consumer spending waned, while third quarter growth was revised lower. As for employment, the labor market posted a particularly soft month in February, but some moderation in jobs appears only natural following several months of robust gains. As for oil prices – Canada being a major oil exporter – those have eased from January’s highs, but not by much. 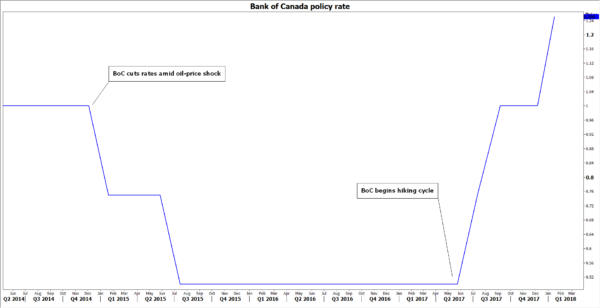 Where does market pricing stand? At the time of writing, investors have fully priced in one more rate hike by the BoC this year, and also see a 70% probability for a second one after that, according to Canada’s overnight index swaps. In case the Bank strikes a cautious tone, and expresses increased concerns on trade risks and the economy’s lackluster performance, then the probability for a second hike could decline further. The Canadian dollar may come under renewed selling interest, with dollar/loonie likely to surge and aim for a test of the psychological 1.3130 territory, which is the 61.8% Fibonacci retracement of the May 2017 – September 2017 collapse, with a high at 1.3793 and a low at 1.2057. A decisive break above that hurdle could open the way for the 1.3220 zone, marked by the lows of April 2017.

On the other hand though, there is a possibility that the BoC does not jump to any conclusions about trade risks and thus, does not appear particularly nervous for now. NAFTA negotiations are ongoing, and there is a likelihood (albeit a small one) that Canada manages to secure an exemption from such tariffs. Moreover, considering that the market may already be anticipating a concerned tone by the BoC in light of these events, even a neutral stance by the Bank could prove cause for a rebound in the loonie. In this scenario, dollar/loonie could fall back down for a test of the 1.2925 support area, which is the 50% retracement of the aforementioned Fibonacci at 1.2720. A downside violation of this area could set the stage for declines towards the round figure of 1.2800, which was congested in the recent past. 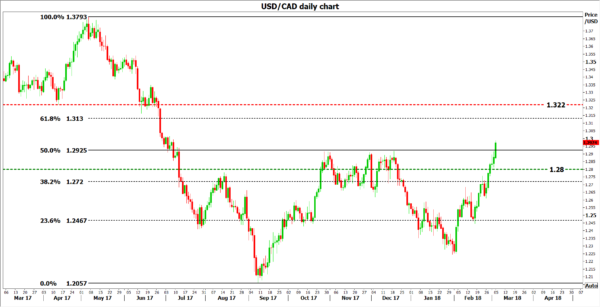