FOREX: The US currency traded less than 0.1% higher versus a basket of currencies on Monday, though it was losing ground versus the yen as those promoting weaker-yen policies were seen as losing public support in Japan.

STOCKS: US markets closed mostly higher on Friday, with the Dow Jones and the S&P 500 advancing by 0.3% and 0.2% respectively, while the Nasdaq Composite was practically flat on the day. Futures tracking the Dow, S&P, and Nasdaq 100 are all currently flashing red though, pointing to a negative open today. In Japan, the Nikkei 225 and the Topix fell by 0.9% and 1.0% correspondingly, as the surge in the yen and the elevated political uncertainty in Japan continued to undermine sentiment in equity markets. In Hong Kong, the Hang Seng traded higher by 0.1%, while in Europe, futures tracking all the major indices are well into negative territory, suggesting these benchmarks are likely to open lower.

COMMODITIES: Oil prices started the week on a soft note, with WTI crude and Brent both declining by 0.2% and giving back some of the significant gains they posted on Friday. While there was no clear fundamental catalyst behind Friday’s move, media reports attributed the surge to political tensions in the Middle East that threaten to disrupt oil production. In precious metals, gold prices fell by around 0.3% on Monday, extending losses from Friday owed to a recovering US dollar. Since gold is denominated in dollars, a strengthening greenback makes the metal appear less attractive for investors using foreign currencies. 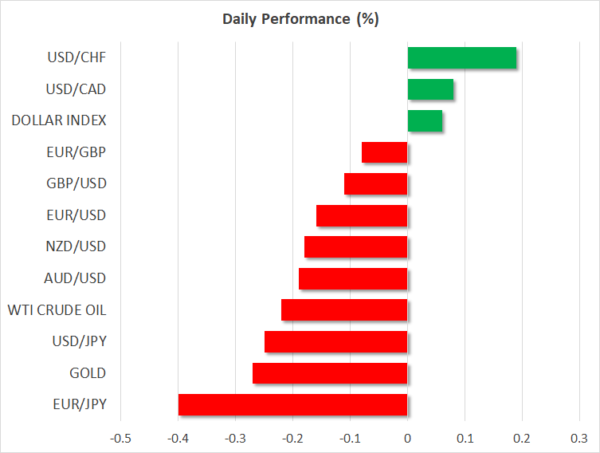 The dollar index was slightly higher at 90.31, not far below Friday’s near three-week high of 90.38 achieved on the back of upbeat data, including surging industrial production in February. The Federal Reserve meeting, that concludes on Wednesday and during which the delivery of a 25 bps interest rate hike is widely expected, is anticipated to give direction to the US currency, at least in the short-term. Any developments on trade are also likely to lead to positioning on the dollar. Treasury yields in both the short- and long-end of the curve were on the rise on Monday, rendering the greenback more attractive.

Given that the delivery of a rate hike is seen as a done deal on Wednesday, the focus is on whether FOMC policymakers will revise their projections for the total number of interest rate rises to four in 2018, from the previous three. New Fed chief Jerome Powell’s press conference upon completion of the meeting will also be attracting interest.

Weekend polls showing declining support for Japanese Prime Minister Shinzo Abe’s government, which has been supporting weaker-yen policies, led to a strengthening Japanese currency. Dollar/yen was 0.25% lower at 105.74, getting closer to the 16-month low of 105.23 that was recorded in early March. Euro/yen traded 0.40% down at 129.73. This compares to last Thursday’s seven-month low of 129.33.

Euro/dollar and pound/dollar were retreating, albeit not by much, trading lower by around 0.2% and 0.1% respectively at 0732 GMT. The former, which came under pressure on the back of a slew of dovish-perceived comments by ECB policymakers over the last couple of weeks, recorded a two-week low of 1.2256 earlier on Monday. Sterling is expected to be driven by Brexit developments this week but also data releases – including on inflation – and the Bank of England meeting on Thursday.

Commodity-linked currencies were losing ground versus the greenback. Dollar/loonie was 0.1% higher, recording a fresh nine-month high of 1.3122. The Canadian dollar has been suffering recently on worries the US will walk away from NAFTA, some dovish-interpreted comments by the Governor of the Bank of Canada, as well as on the back of soft housing data last week. Aussie/dollar and kiwi/dollar were both down by 0.2%, with the former hitting a three-month low of 0.7684 and the latter a near three-week low of 0.7194, as increasing concerns over a potential trade war took their toll on these trade-sensitive currencies.

Day ahead: G20 meeting the first event in a packed week

The economic calendar is almost empty in terms of data releases today, but the G20 meeting in Argentina should provide ample of headlines to keep traders busy.

The finance ministers of the Group of 20 nations will commence a two-day meeting today in Buenos Aires. While such meetings are typically not major events for the foreign exchange market, this time may well be different, as the finance leaders are expected to discuss the outlook for free trade in light of the protectionist policies of the Trump administration. Any comments from the various ministers will be closely tracked, especially those from the US delegation, headed by Treasury Secretary Mnuchin. If the broader message from the G20 is one that reaffirms their commitment to resist protectionism, some trade concerns could dissipate. In such case, the aussie, the kiwi, and stock markets could recover, while safe havens like the yen may tumble. On the contrary, if the US delegation for example appears committed to introducing new tariffs on China soon, trade woes could remain in the spotlight. In this scenario, the market reactions that ensue may be a lower aussie and stocks, while safe assets such as the JPY could extend their recent gains.

The only data release that could attract some attention is eurozone’s trade balance for January, due out at 1000 GMT, though this is usually not a major market mover for the euro.

In terms of policymakers’ appearances, there are three on the agenda. In the US, Atlanta Fed President Raphael Bostic will deliver remarks at 1340 GMT, while in the eurozone, ECB Executive Board member Yves Mersch will step up to the rostrum at 1800 GMT. Considering that we are currently in the Fed’s “blackout” period though, ahead of the rate decision on Wednesday, Bostic is not anticipated to touch on monetary policy. Norges Bank Governor Oystein Olsen will also be giving a speech at 1600 GMT.

The rest of the week looks much more interesting, with three major central bank meetings, an EU summit, as well as a raft of key economic data due to be released, mostly from the UK. The Fed will announce its policy decision on Wednesday, and since a 25bps rate hike is already fully priced in, focus may be on whether or not policymakers will upgrade their rate path projections to signal four rate hikes in 2018, from three currently. A few hours after the Fed, the Reserve Bank of New Zealand (RBNZ) is expected to keep its policy unchanged. Then on Thursday, focus will turn to the Bank of England (BoE), where investors will be looking for signals regarding the likelihood of a rate hike in May. Besides the BoE on Thursday, sterling traders will also concentrate on the outcome of the EU summit, where EU leaders are anticipated to approve a transitional Brexit deal for the UK. 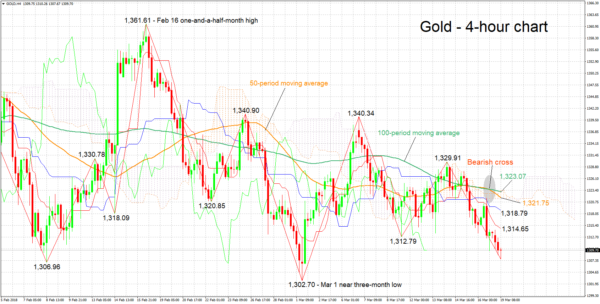 Gold has declined after hitting a near two-week high of 1,329.91 last week, eventually posting an 18-day low of 1,307.67 earlier on Monday. The negatively aligned Tenkan- and Kijun-sen lines are projecting a bearish short-term picture for the precious metal.

If the US currency weakens, then the dollar-denominated metal could post some gains. Resistance to price advances might come around the current level of the Tenkan-sen at 1,314.65; a previous bottom at 1,312.79 is also part of the area around this level.

A stronger greenback on the other hand is likely to lead to losses for gold, with the range around the near three-month low of 1,302.70 from March 1 potentially providing support to price declines.

Rising or receding risks over global trade also have the capacity to offer direction to the safe-haven perceived asset.

Gold Loses Its Shine As It Nears A Two-Month Low