Pound Trading Higher In The Asian Session, Ahead Of UK’s Manufacturing PMI Data

On Thursday, data showed that Britain’s final gross domestic product (GDP) advanced 0.4% on a quarterly basis in the final three months of 2017, confirming the flash print and following a similar rise in the prior quarter. Also, the nation’s net consumer credit grew £1.6 billion in February, after recording a revised rise of £1.3 billion in the previous month and beating market expectations for an advance of £1.4 billion.

Other data showed that the nation’s mortgage approvals eased to a level of 63.9K in February, more than market expectations for a fall to a level of 66.0K. In the prior month, mortgage approvals had registered a revised level of 67.1K. Further, the nation’s seasonally adjusted Nationwide house prices unexpectedly eased 0.2% MoM in March, confounding market consensus for a rise of 0.2%. House prices had registered a revised drop of 0.4% in the prior month.

Moving ahead, market participants would focus on UK’s Markit manufacturing PMI for March, set to release in a few hours. 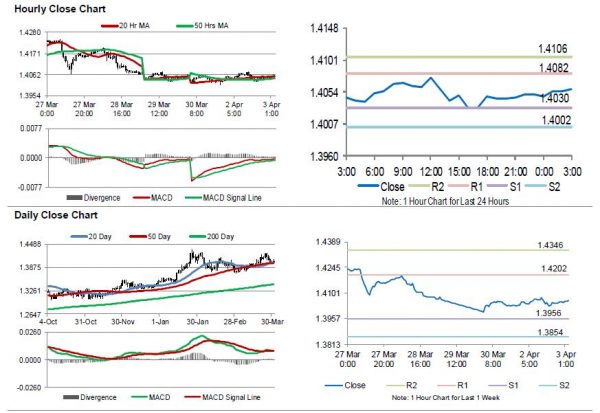