Quarterly inflation numbers out of New Zealand on Thursday are expected to show the country’s CPI rate moving back towards the lower end of the Reserve Bank of New Zealand’s target band. The data (due at 22:45 GMT on Wednesday) would likely reaffirm expectations that the RBNZ will be on hold for a while longer. 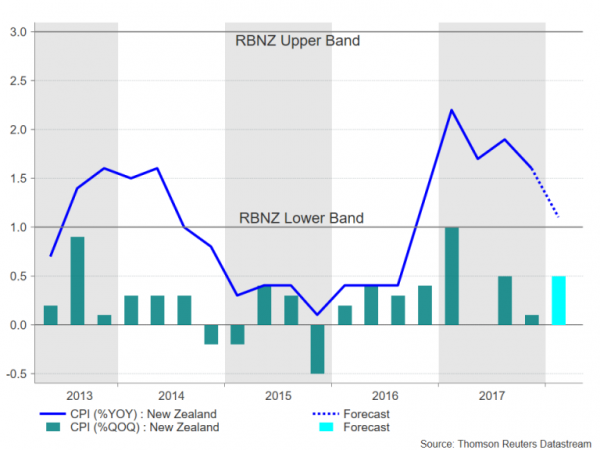 The RBNZ could see the pick-up in the quarterly rate as an encouraging sign that price pressures are not about to weaken further and stick to its neutral stance. The central bank’s new governor, Adrian Orr, who took the helm on March 27, has signalled there won’t be any significant shift to monetary policy after the RBNZ’s mandate was revised last month, which now includes “maximizing sustainable employment” in addition to the inflation goal. Speculation that the planned reforms would lead to looser policy had contributed to the sell-off that led the New Zealand dollar to 1½-year lows below $0.68 back in November 2017. However, Orr’s comments helped the kiwi climb close to the $0.74 level last week.

If the inflation data comes in above expectations, the kiwi may make another attempt at challenging the $0.74 barrier. A break above this resistance would bring into scope the February top of $0.7436, followed by the July 2017 top of $0.7558. However, a weaker-than-expected reading where the CPI misses the 1% lower target band could raise speculation that the RBNZ’s next move will be down rather than up. A subsequent sell-off could see the kiwi heading towards support around the $0.7280 level, which is where the 20- and 50-day moving averages are currently converging. A breach of this support could lead to a test of the $0.72 handle.

Any surprise to the data is unlikely to see a very big reaction however, as traders would probably want to wait until the RBNZ’s next policy meeting on May 10 to get a better idea about the new Governor’s views and the bank’s response to the quarterly inflation data.