FOREX: The US dollar index is higher today, but by less than 0.1%. Aussie/dollar is up by 0.2%, lifted by a notable rally across commodities. Meanwhile, the loonie steadied against the dollar, after it plunged yesterday on the back of cautious signals from the BoC.

STOCKS: US markets closed mixed yesterday. While the Nasdaq Composite and the S&P 500 advanced 0.2% and 0.1% respectively, the Dow Jones fell nearly 0.2%, weighed on by disappointing earnings from IBM (-7.5%). Futures tracking the Dow, S&P and Nasdaq 100 are all currently very close to neutral territory, suggesting these indices could open at similar levels today. Japan was a similar story, with the Nikkei 225 and the Topix closing in the green, but only by 0.15% and 0.03% correspondingly. In Hong Kong though, the Hang Seng surged 1.0%. In Europe, futures tracking the major benchmarks were mixed.

COMMODITIES: Oil prices skyrocketed yesterday and extended their gains today, with both WTI and Brent reaching fresh highs last seen in 2014. The trigger for the surge was a report that Saudi Arabia would be happy to see oil reach $80 or $100, fueling speculation the nation and OPEC will continue to restrict supply to achieve this. The cherry on the pie were the weekly EIA inventory data, which showed a larger-than-expected drawdown in US crude stockpiles. In precious metals, gold edged higher by 0.3% today. There was no risk-off catalyst behind the gains, so its outperformance seems to be owed to the broader rally across commodities. Nickel climbed to a three-year high, while aluminum touched a fresh six-year high, boosted by concerns US sanctions against Russian companies could impact the supply of such materials. News China is set to impose anti-dumping measures on rubber may have helped the moves too. 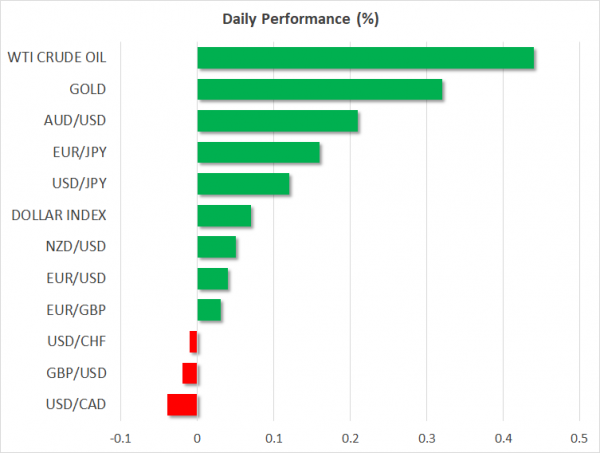 The Canadian dollar dived yesterday, following the BoC’s policy decision. The Bank remained on hold, as was widely anticipated, while the statement accompanying the decision erred on the side of caution, disappointing those looking for hawkish signals that a rate hike is imminent. Officials dismissed the recent surge in inflation, attributing it mostly to transitory factors, while they also highlighted escalating geopolitical and trade conflicts as key risks to the economy’s outlook.

The implied probability for a July rate hike fell alongside the loonie, declining from nearly 95% prior to the gathering to 80% currently, according to Canada’s OIS. It’s worthy to note though, that the surge in oil prices yesterday likely limited any greater declines in the loonie. Focus now turns to the release of the nation’s inflation and retail sales data, due out tomorrow.

Elsewhere, the British pound slumped after the UK CPI data for March disappointed. Both the headline and the core inflation rates surprisingly declined, missing their forecasts for staying unchanged and ticking up respectively. Interestingly enough, while sterling responded as one would expect, the probability for a BoE rate hike in May barely budged, staying elevated at 67%. Thus, markets did not see these prints as derailing the prospect for a May action. That said, the overall soft data recently do suggest the Bank could deliver another “cautious” hike. Recall that although the BoE raised rates in November, sterling dropped in the aftermath, as the hike was accompanied by dovish signals.

The antipodeans are slightly higher today. Aussie/dollar advanced 0.2% even despite lackluster jobs data out of Australia overnight, most likely supported by the broader gains in commodities. Kiwi/dollar was up as well, but by less than 0.1%, responding little to the release of New Zealand’s CPI for Q1, which slowed in line with expectations.

In emerging markets, the Turkish lira surged yesterday, touching a 2-week high against the dollar after Turkish President Erdogan announced the nation will head to early elections in June.

Day ahead: UK retail sales on the horizon

UK retail sales for the month of March are due at 0830 GMT. Those are projected to have fallen on a monthly basis, but to have risen annually. Core retail sales, that exclude fuel from their calculations, will also be watched and are expected to exhibit the same pattern, i.e. reflect an improvement relative to a year ago and a decline compared to February’s reading. Sterling’s tumble over the last couple of days in the aftermath of data on wage growth and inflation coming in below analysts’ forecasts perhaps adds an additional element of interest to today’s release.

In North America, the US will see the release of initial and continued jobless claims data for the week ending April 14, as well as the Philly Fed’s business index, at 1230 GMT. Out of Canada, the ADP nonfarm employment report due at the same time might generate some attention.

Corporate earnings remain in focus in the equity space and could drive overall market sentiment.

Permanent FOMC voting members Lael Brainard and Randal Quarles will be among policymakers making appearances today. The two will be talking at 1200 GMT and 1330 GMT respectively. Also of interest might be a news conference (1245 GMT) by IMF Managing Director Christine Lagarde and World Bank President Jim Yong Kim ahead of the Spring Meetings of the two organizations; among notable names attending the meeting is ECB President Mario Draghi.

Lastly, geopolitical and trade developments, particularly the latter, have been themes driving the markets for weeks now and it is not unlikely for markets to move on the back of updates on those fronts during today’s trading. 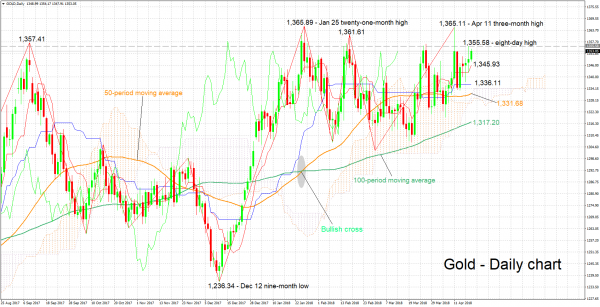 Gold is posting gains for the fifth day in a row and is currently trading nor far below Wednesday’s eight-day high of 1,355.58 (this being a three-week high if one were to exclude April 11’s spike higher). The Tenkan-sen is above the Kijun-sen, projecting a bullish picture in the short-term. The flat Kijun-sen though may be pointing to easing positive momentum.

Rising trade and/or geopolitical uncertainty could boost the safe-haven perceived asset. Immediate support may be taking place around yesterday’s high of 1,355.58, with an upside break turning the attention to April 11’s three-month high of 1,365.11 – the area around this mark also includes the 21-month high of 1,365.89 from late January.

Conversely, receding uncertainties might drive funds out of the yellow metal, pushing it lower. Support to declines could come around the current level of the Tenkan-sen at 1,345.93.

A rising greenback is also likely to act to the detriment of the dollar-denominated metal and vice versa.