Action Forex
HomeContributorsFundamental AnalysisAs 10-Year US Yields Break above 3%, is the Dollar Turning a...

As 10-Year US Yields Break above 3%, is the Dollar Turning a Corner?

The US dollar broke above the 109-yen level for the first time since early February this week, taking the dollar bears, who have been betting on more losses for the beleaguered greenback, by surprise. The sudden shift to a more bullish sentiment, in the short term at least, comes amid a surge in US Treasury yields, which has led to a widening in the spread of US sovereign bond yields with its peers. But as the dollar climbs to three-month highs against a basket of currencies, is this the start of a trend reversal or simply short covering?

The main trigger for the past week’s spike in the yield of 10-year Treasury notes was the sharp rally in oil prices which took the benchmark WTI and Brent crude prices to more than three-year highs. Higher oil prices are seen as inflationary as they tend to increase costs for both consumers and businesses. The resultant boost to future inflation expectations is positive for rate hike expectations. 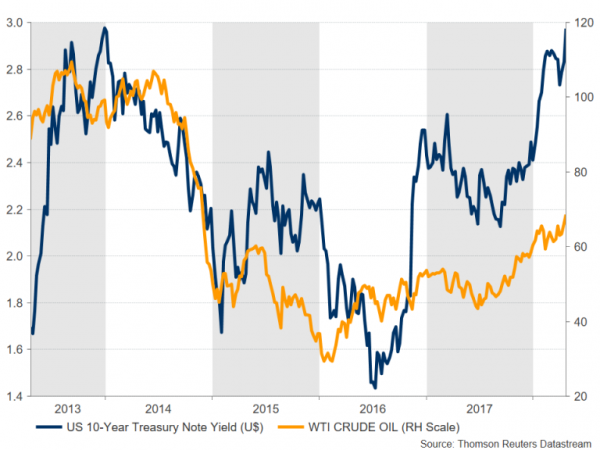 Ten-year Treasury yields crossed above 3% on Tuesday for the first time since January 2014; short-term yields have also been setting new highs. The last time 10-year yields attempted to break above the psychological 3% level back in February, it sparked a market turmoil and a global sell-off in equities. However, markets appear readier this time round in contemplating 10-year yields above 3%. More significantly though, the positive relationship between the dollar and treasury yields was re-established during the latest jump in bond yields.

That relationship became broken in 2017 when US yields saw modest declines before starting to steadily climb again in September, but the dollar stuck to its downtrend for the duration of the year. If this indeed is a sign that investors are moving their focus back to yield spreads, the dollar could be in line for more gains. 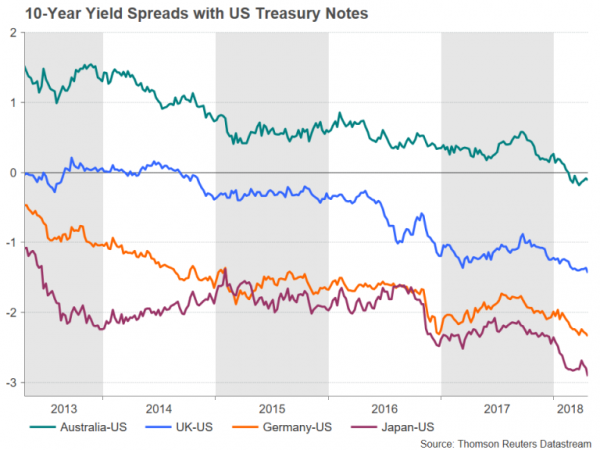 However, it may be premature to interpret the dollar’s strong gains as a trend reversal as the latest data from the Commodity Futures Trading Commission shows traders raised their bearish bets on the US currency, increasing their net short dollar positions to the highest since August 2011 at the end of last week. This could be an indication that the current upturn is merely a technical rebound driven by short covering or by unwinding of trades by dollar bears who were caught off-guard by the recent dollar-positive developments. The gains could also be exasperated by a weaker Japanese yen as safe-haven demand recedes on fading geopolitical risks. 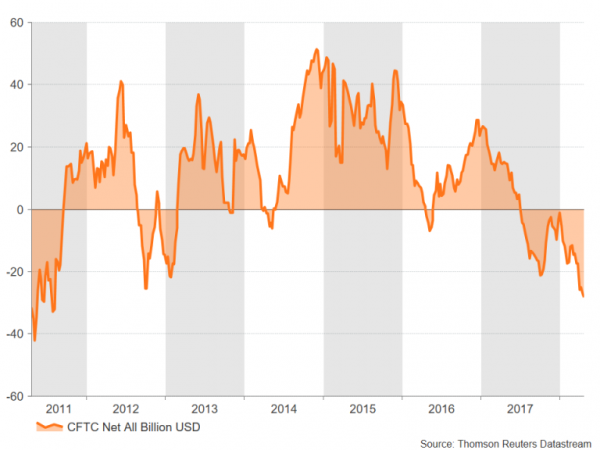 This is evident when looking at the greenback’s broader measure, the dollar index, which has been trading sideways since mid-January and has yet to show a convincing sign of breaking out of its range. The index already appears to have met resistance around the 91 level – the upper bound of the three-month old range. Dollar/yen also looks to have found a barrier at a key level. The pair’s ascent to two-month highs is slowing around the psychological 109 handle, which happens to be the 50% Fibonacci retracement of the down move from 113.38 to 104.55. Should these resistance levels hold, the dollar could retreat lower again. A move below key support areas at 106.50 yen and 89.75 would see the current positive momentum being erased.

However, if the dollar was successful in breaking above these critical levels, it could help generate momentum for a more sustained uptrend, bringing into focus the 110-yen and 91.80 levels. A more bullish dollar is certainly endorsed by US economic fundamentals.

While recent data out of the US have not been spectacular, neither has it been poor, suggesting the American economy continues to grow at a solid and steady pace. In comparison, Eurozone indicators have been consistently falling short of expectations in the first four months of 2018, and Japanese data haven’t fared much better either.

The sluggish start to the year has led many investors to backtrack on earlier projections that the European Central Bank and the Bank of Japan would make an early exit from their respective stimulus programs. This has once again left the Federal Reserve as the only major central bank with a confident tightening path and FOMC members are now openly discussing the possibility of four rate hikes in 2018 instead of three. Futures markets have also started to price in a steeper rate path, with the odds of a fourth-rate hike currently approaching 50%.

Should the 10-year yield continue to rise above 3%, it could set the stage for a new bullish phase for the dollar, marking the end of a 15-month downtrend. However, even in the event that sentiment for the greenback was to turn more convincingly bullish, a bigger question that would arise is how far would the rally go given the hanging risks from President Trump’s protectionist policies and the country’s deteriorating fiscal outlook.