The Federal Open Market Committee (FOMC) begins a two-day monetary policy meeting on Tuesday, with a decision expected on Wednesday at 18:00 GMT. No change to the federal funds rate is expected this month, which now stands at a target range of 1.50-1.75%. The Committee last raised rates in March and indicators for the US economy have been consistently solid since then. But with no new quarterly projections scheduled in May and policymakers committed to a gradual rate hike path, the Fed is not likely to break the recent tradition and deliver a surprise rate increase at a non-press conference meeting.

Data last week showed US GDP growth slowed during the first three months of 2018, with the economy expanding at an annualized rate of 2.3% compared to 2.9% in the prior quarter. However, the figure was better than the consensus forecasts of 2.0% and growth is expected to quicken considerably in the coming quarters. Meanwhile, the US labour market continues to go from strength to strength, and the country’s unemployment rate is forecast to fall to an 18-year low of 4.0% in April in this week’s jobs report. 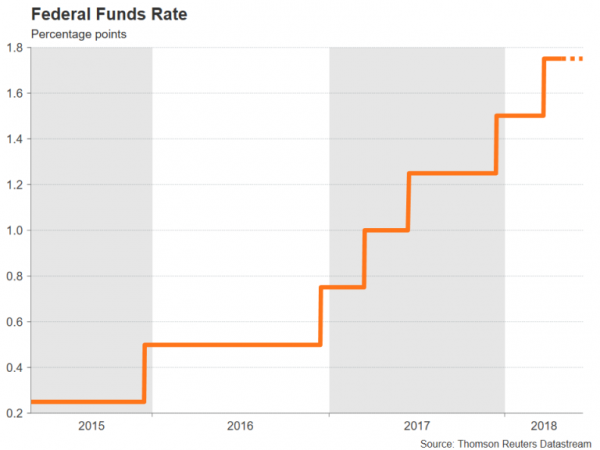 The inflation picture has also been improving, with all key price gauges jumping higher in March. The 12-month consumer price index rose to a one-year high of 2.4%, while the Fed’s preferred measure, the core PCE price index advanced to 1.9% – the highest since February 2017 and just shy of the Fed’s 2% target. The acceleration in price growth is likely to be welcome news for the Fed, which some have accused of moving too fast with rate hikes amid elusive inflationary pressures. 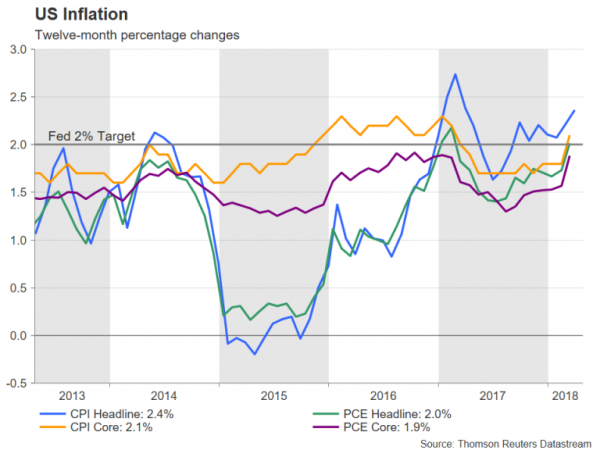 The recent run of upbeat data may tilt the tone of Wednesday’s policy statement to a slightly more hawkish one, with some possible tweaks to the language to illustrate a more confident inflation outlook and/or improving growth prospects.

A more hawkish-than-anticipated statement could drive the US dollar to break above the key 110 level against the yen, which at the moment is being capped by the 109.50 resistance level. The dollar is on track to enjoy its strongest month since February 2017 in April, following a sharp rebound at the end of March. However, if the Fed disappoints by not making any alteration to its wording, the greenback’s rally could lose some steam and dollar/yen could struggle to hold above the 109 level. A breach of the 109 handle would open the way towards the 108 level.

A bigger test for the dollar though will probably be Friday’s nonfarm payrolls report, and in particular, the wage growth data. The Fed is keen to see a pick-up in earnings in order to be convinced that inflation is on a sustained path upwards. Growth in average hourly earnings is expected to hold steady at 2.7% in April. A near-term challenge of the 110-yen level looks difficult as long as pay increases remain below 3% as the Fed is unlikely to shift out of ‘gradual’ mode without clear signs that wage pressures are building up.