The start of May has been busy for investors with a mid-week Fed rate decision and plenty of economic data to sift through. Domestic data generally outperformed, sending the U.S. dollar and rates higher, but yields pulled back a touch towards Friday. Higher dollar and rates weighed on U.S. equities, while international stocks saw some upward movement on lower yields and exchange rates – related to somewhat weaker data.

International data this week revealed that economic momentum continued to slow in April. The most recent international PMIs softened somewhat, however much of the softness can likely be attributed to heightened trade uncertainty. Protectionist themes and tariffs have been making headlines on a regular basis, denting business confidence and stifling expansion plans. For instance, this week the Trump administration doubled down on demands for China to reduce its trade surplus with the U.S. by $200 billion.

Most critically, domestic businesses appear unable to escape the rising tide of trade protectionism. Both the manufacturing and non-manufacturing ISM indices pulled back 2 points apiece in April. However, they remain near cycle highs, and are indicative of ongoing healthy pace of growth.

Other domestic data confirms that growth remains solid despite the downside risks. Personal income rose by a healthy 0.3% in March, while consumer spending rose 0.4%, consistent with the narrative of tax cuts and rising jobs and wages motivating Americans to shop. A rebound in spending in the second quarter supports an outlook that sees economic activity expanding around 3%, a trend that we anticipate to hold through the end of the year.

The persistence of strong, above-trend growth is driving price pressures higher. Inflation strengthened in March, reaching 2% according to the PCE deflator (the Fed’s preferred measure). The core PCE deflator (which strips out the most volatile components) also strengthened to 1.9%, just a hair below the FOMC target of 2%. The Fed took notice of this data during their meeting this week. Although it kept rates on hold, some notable changes to the wording were made. All told, the Fed’s confidence regarding inflation and its outlook should provide it with the conviction to keep moving rates higher, assuming wage and prices rise as expected.

This morning’s payroll report for April was consistent with this view despite the headline miss. Although wage growth slowed a touch, the drop in the unemployment rate to a 17-year low of 3.9% suggests that wage and price pressures should continue to gradually build.

Ultimately, inflation holding near target is consistent with our call for two more rate hikes from the Fed this year, with the next hike likely coming in June. That said, it’s not out-of-the question that the Committee raises rates by another 75 basis points this year. This gradual pace of tightening should help minimize the risk of slowing activity too quickly and resulting in a recession, something the FOMC officials are keenly trying to avoid. 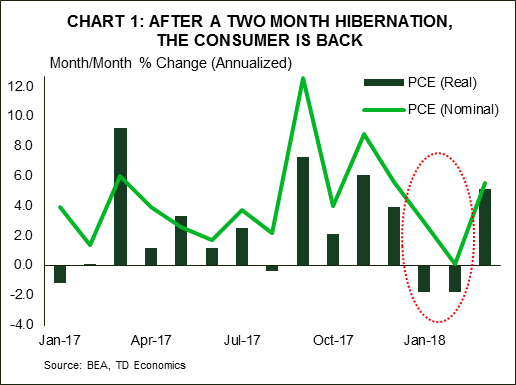 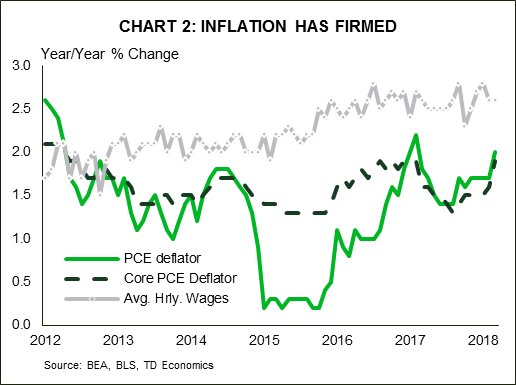 It was an eventful week on the Canadian economic calendar, with several key data releases and a speech by Governor Poloz leaving markets with plenty to ponder. The Canadian dollar trended sideways during the week despite the competing forces of a solid GDP report, comments concerning household debt by the Bank of Canada Governor and a widening trade deficit. Both the TSX and bond yields were broadly unchanged, with the latter holding near multi-year highs.

Economic data released this week was somewhat of a mixed bag. On the positive side, GDP growth topped expectations in February, rising 0.4% in the month. Goods sector output advanced at a solid rate, though part of the story was normalizing oil production after one-off disruptions at some facilities in January. Still, the broad-based gain in goods-producing industries was encouraging. Output increased at a much slower rate on the services side, as a large decline in the real estate sector partially offset growth in other services industries. All told, the majority of industries recorded higher output in the month, suggesting healthy underlying momentum (Chart 1).

Though GDP growth rebounded strongly in February, other more forward-looking indicators sent mixed signals. For starters, April home sales dropped in Toronto while bouncing higher in Vancouver. Declining activity in Toronto is somewhat disappointing, as signs of stabilization had emerged recently. In contrast, the increase in activity in Vancouver is encouraging, though given the array of actions taken by the B.C. government to cool activity earlier in the year some additional downside to sales could manifest in coming months. Looking ahead, it will likely be some time before a sustained improvement in activity emerges in either market.

Merchandise trade data pointed to net trade being a drag on growth both in March and the first quarter overall. However, details of the report were more encouraging. Although the notable increase in exports was offset by a surge in imports, the latter likely reflects healthy domestic demand (Chart 2). As such, some of the gain in imports should show up in support of domestic demand for the first quarter, offsetting the drag from trade.

All told, the data suggests that the Canadian economy continues to hum along as expected, with growth expected to pick up in the second quarter after two consecutive quarters of near-trend performance. As such, we believe that the Bank of Canada will move rates higher in July, which affords policymakers sufficient time to monitor wage and inflation dynamics and gauge the sensitivity of the economy to rising borrowing costs.

On that note, Governor Poloz delivered a speech this week focused on the threat that elevated debt levels poses to the economy. The Governor noted that debt remains at a record high relative to income, and that pockets of even greater vulnerability exist beneath the aggregate statistics. Despite the notable downside risk this poses to the economic outlook, he ended his speech by confidently reiterating that the economic outlook is “quite good” and that policymakers can “manage these risks successfully”. 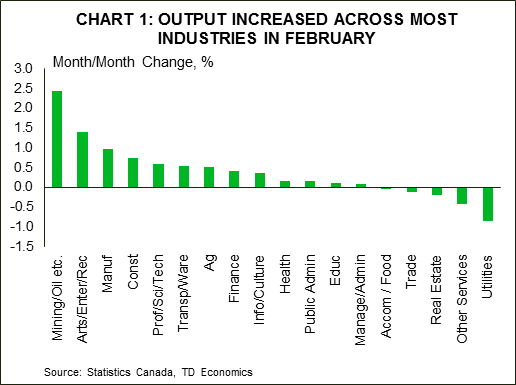 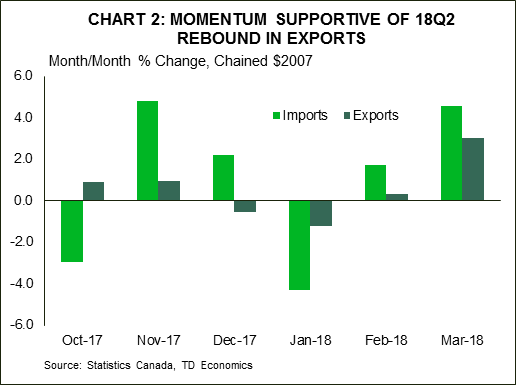 We expect headline CPI inflation to accelerate further to 2.5% y/y in April, with prices up 0.3% m/m on a seasonally adjusted basis. Gasoline prices will lend a strong boost while we expect food prices to pick up after a relatively weak showing in the prior two months. Outside of food and energy, we look for a solid 0.2% m/m print, driving core inflation higher to 2.2%. This assumes some recovery in core goods prices which fell on balance in March and continued strength in services, underpinned by shelter and medical care services. 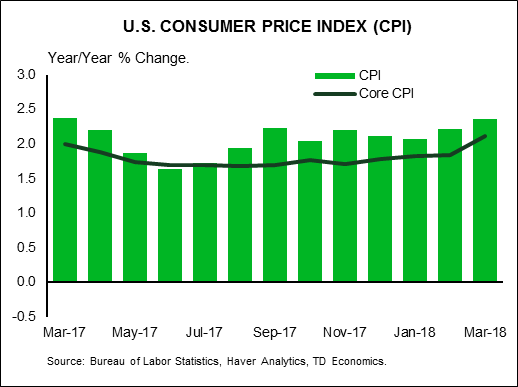 TD looks for the economy to add 25k jobs in April with job growth tilted towards full-time workers. While full-time employment has seen significant gains over the last year, its share of total employment remains below pre-crisis levels and has room to rise. April is also one of the strongest months for full-time job growth, outperforming part-time by nearly 30k on average since the crisis. Meanwhile, wages should see an uptick to 3.3% y/y on positive base-effects, matching the seven-year high and in line with the latest SEPH data. We also expect the unemployment rate to hold at the cycle low of 5.8%, with risks tilted towards an improvement to 5.7%. 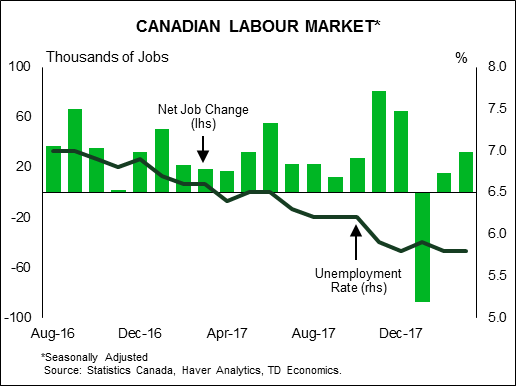