FOREX: The euro extended its losses against the dollar early in the European session as investors shorted their positions on the currency amid uncertainties surrounding the Eurozone’s economic performance, sending euro/dollar to a fresh 4-month low of 1.1870 (-0.41%). Pound/dollar was also on the back foot, slipping to 1.3509 (-0.35%) after the British Halifax house price index fell by more than expected on a monthly basis. Brexit risks were pressuring the pair as well, while analysts were eagerly waiting for BoE policymakers to cancel the planned rate hike on Thursday. Dollar/yen was marginally lower at 108.96 (-0.10%), while the dollar index managed to crawl slightly above the 93 key-level (+0.34%) ahead of Trump’s announcement on the 2015 Iran nuclear deal later today which could add some volatility to the dollar pairs. Regarding the latest news on the latter, Russia threw a warning today, saying that “any changes to the deal could have negative consequences”. Dollar/loonie was the best performer, advancing to a six-week high of 1.2985 (+0.77%). On the other hand, the antipodean currencies shrugged off upbeat Chinese trade data released during today’s Asian session and stretched lower, with aussie/dollar tumbling to an 11-month low of 0.7451 (-0.82%) and kiwi/dollar hitting a 4-month trough of 0.6974 (-0.61%). Inflation worries in Turkey draw the Turkish lira to a new record low.

STOCKS: The pan-European STOXX 600 and the blue-chip Euro STOXX 50 opened lower on Tuesday, being down by 0.15% and 0.21% respectively at 1100 GMT, with energy sectors dragging down the indices. The German DAX 30 retreated by 0.51% weighed by worse-than-expected Q1 earnings delivered by the German postal and logistics group Deutsche Post DHL. The French CAC 40 lost 0.43%, while the Italian FTSE MIB 100 declined by 2.24% as the third round of coalition talks in Italy failed, signaling that fresh elections could take place as soon as July 8th. The British FTSE 100, on the other hand, was in positive territory, gaining 0.11% after the Japanese company Takeda Pharmaceutical agreed to buy the London-listed Shire and Unilever announced the start of a 6 billion share buyback scheme. Futures tracking US stock indices were flashing red, pointing to a negative open.

COMMODITIES: Oil prices were under pressure ahead of Trump’s announcement on whether he would pull out of the 2015 Iran nuclear deal or reimpose sanctions on Iran today at 1800 GMT; four days earlier than previously scheduled. If the US president withdraws the US from the agreement after France and Germany failed to persuade him not to engage in such an action, oil prices could bounce up towards yesterday’s 3 ½ -year highs. However, since this scenario is already priced to some extend in the markets, a rebound in prices could be softer than a downfall if Trump unexpectedly decides to stay in the accord. Meanwhile, Iran’s oil exports surged near to recent record highs in April. WTI crude and the London-based Brent were last seen at $69.82 (-1.29%) and $75.41 (-1.00%) per barrel respectively. In precious metals, gold was weaker at $1,310.13 (-0.29%) per ounce. 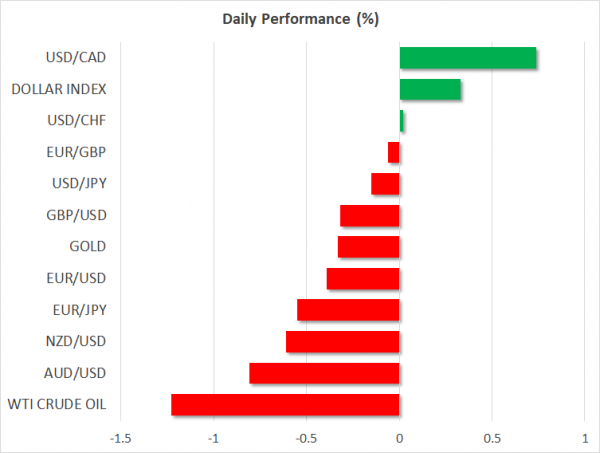 Later today all eyes will turn to the US President Donald Trump who is anticipated to announce at 1800 GMT whether he will stay in the so-called Joint Comprehensive Plan of Action signed also by Iran, the UK, France, Germany, Russia, and China back in 2015 to ease sanctions on Iran in exchange for control over its nuclear program. The market chatter supports that the US president will likely pull the US out of the accord negotiated under Obama’s presidency, bringing another headache to global markets. But his plans to renew sanctions against Iran could take time to implement as those would affect trade actions between Europe and Iran. While this has already being priced in to some extend by the markets, an unexpected decision by Trump to renew the agreement could cause a larger decline in oil prices.

Economic releases during the day will be light. Canada will see the release of housing starts for the month of April at 1315 GMT, while the US JOLTs job openings will be attracting the most interest at 1400 GMT. Particularly, the report published by the Bureau of Labor Statistics is expected to show that 6,101 million positions opened in March compared to 6,052 million seen in the preceding month.

In energy markets, investors will be waiting for the API weekly report at 2030 GMT to indicate the change in US crude oil stocks, after the aggressive run in oil prices on Monday.

In equities, Walt Disney and Nvidia are two of the companies releasing results this week, on Tuesday and Thursday respectively. 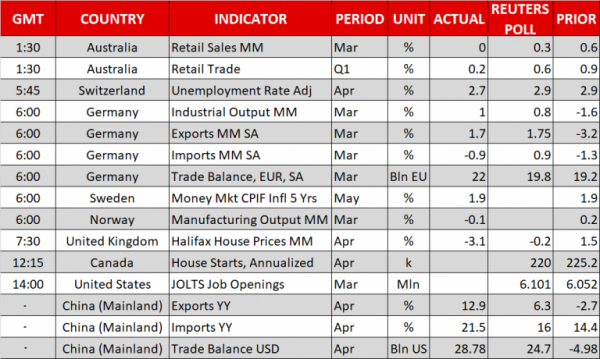