Tuesday May 22: Five things the markets are talking about

Markets traded mixed overnight, with global equities drifting and a number of risk currencies finding support as investors digest easing trade tensions and the latest comments from a plethora of central bank members.

The EUR (€1.1809) has found some traction as Italian bonds recover from a two-session slide as the market focuses on whether Italy’s president will veto the populist coalition’s plans to form a government. The pound (£1.3465) is rallying amid speculation over another U.K election.

The Federal Reserve releases minutes of the central banks May 1-2 meeting tomorrow and a slew of U.S debt sales this week is expected to dominate proceedings.

In Japan, stocks edged lower overnight, backing away from their four-year high print yesterday, with financial shares leading declines as investors booked profits on signs of an apparent peak in U.S bond yields. Both the Nikkei and broader Topix ended -0.2% lower, weighed down by financial shares.

In China, Shanghai stocks erased early losses to end flat overnight, amid signs of easing trade tensions, after the U.S and China are said to be nearing a deal to settle ZTE controversy. The blue-chip CSI300 index fell -0.4%, while the Shanghai Composite Index ended flat.

In Europe, markets opened higher and have remained positive. Equities are catching up after the extended weekend. Higher oil prices is supporting the energy sector, while automakers are supported as China is said to cut import duty for cars. 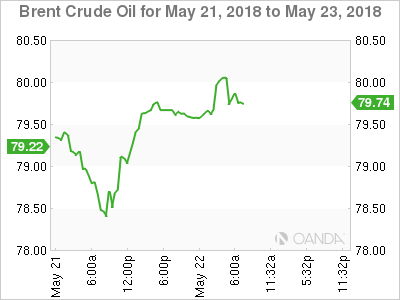 Oil prices have rallied overnight on concerns that Venezuela’s crude output could drop further following a disputed presidential election and potential U.S sanctions on the OPEC-member.

Note: Brent broke through $80 for the first time since November 2014 last week.

The U.S has also toughened its stance on Iran, which could further curb the country’s crude oil exports and boost oil prices. They have demanded Iran make sweeping changes – from dropping its nuclear program to pulling out of the Syrian civil war – or face severe economic sanctions.

Ahead of the U.S open, gold prices have dipped slightly, hovering atop of this year’s low print in yesterday’s session as a firm U.S dollar nears its five-month highs and optimism in global markets curbed appetite for the precious metal. Spot gold is down -0.2% at +$1,290 per ounce. On Monday, it slid to +$1,281.76, its lowest since December, 2017. U.S gold futures, for June delivery slipped -0.1% to +$1289.8 per ounce. 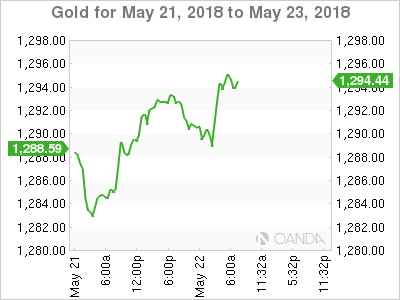 Italian government bond yields (BTP’s) have backed off from their 14-month highs as the market takes a breather after six days of heavy selling on concerns over the high-spending policies proposed by the 5-Star/League coalition in the eurozone’s third-largest economy.

Note: The likelihood of a coalition has pushed Italian 10-year yields up nearly +70 bps in May. 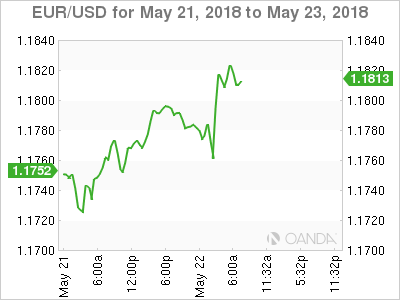 The USD is consolidating just above its five-month highs, stalling as a higher U.S yield trend comes under pressure.

The dollar is reversing early gains versus the EUR and now trades lower, with EUR/USD up +0.3% at €1.1827. However, the market remains cautious on the Italian political situation. Italian President seems to be hesitant in confirming the proposed PM due to his lack of political experience.

GBP/USD (£1.3473) has bounced back to approach the £1.35 handle. Hawkish rate outlook by BoE’s Vlieghe at his reappointment hearing is helping the pound recover. Vlieghe stated that he saw one to two rate hikes of +25 bps per year during the three-year policy horizon. 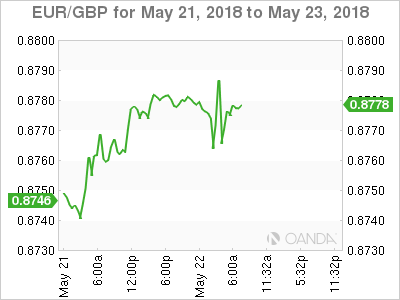 5. U.K’s CBI – Manufacturing pauses for breath in May

According to the Confederation of British Industry’s latest monthly industrial trends survey, U.K Manufacturing output was broadly unchanged in the three months to May and firms reported a further softening in order books (-3 vs. 2).

Digging deeper, the survey found that the volume of total order books fell to the lowest since November 2016, though orders remained above their long-run average.

Export order books held up better, having been broadly unchanged in recent months at a level that is also well above the historical average. Output was broadly unchanged in the quarter to May, the weakest performance since April 2016, but is expected to rebound over the next three months.

Note: Output grew in only 8 of the 17 sub-sectors, with the heaviest drag coming from the chemicals, and food, drink and tobacco, sectors. 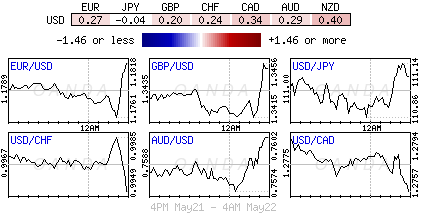