FOREX: Japanese yen (-0.10%) reached on Monday on the back of rising US Treasury yields and easing US-China trade tensions. The US dollar index was on the back foot as well, losing 0.34% after a touch at 94.05, the highest level marked since December. Pound/dollar rallied initially towards 1.3454 finding support from comments made by Bank of England policymaker Gertjan Vlieghe who said that rates are set to rise 25 to 50 basis points every year over a three-year forecast period compared to just under three 25 basis point hikes assumed by markets earlier. However, worries on Brexit expressed by the BoE Governor Mark Carney and lower-than-expected CBI industrial trends which turned negative instead pushed the pair down to 1.3450 afterwards (+0.20%). Euro/dollar was stronger by 0.23% today slightly above the 1.1800 key level after the rebound on the 6-month trough of 1.1715 yesterday. Commodity-linked currencies are generally strong, with aussie/dollar hitting 1-month highs at 0.7604 (+0.20%). kiwi/dollar traded higher by 0.09% at 0.6950 and dollar/loonie was lower by 0.13% at 1.2761.

STOCKS: European stocks were mostly in the green at 1100 GMT on Tuesday. The benchmark European STOXX 600 rose marginally by 0.02%, while the blue-chip Euro STOXX 50 was slightly down by 0.05%. The German DAX 30 rose by 0.09% near its more than 3-months high. The French CAC 40 was down by 0.05% and the Spanish IBEX 35 was moving moved higher by 0.58%, while the British FTSE 100 gained 0.13%. In the US, the S&P, Dow Jones, and the Nasdaq all surged yesterday and futures tracking these indices are currently in the green, pointing to a higher open today. 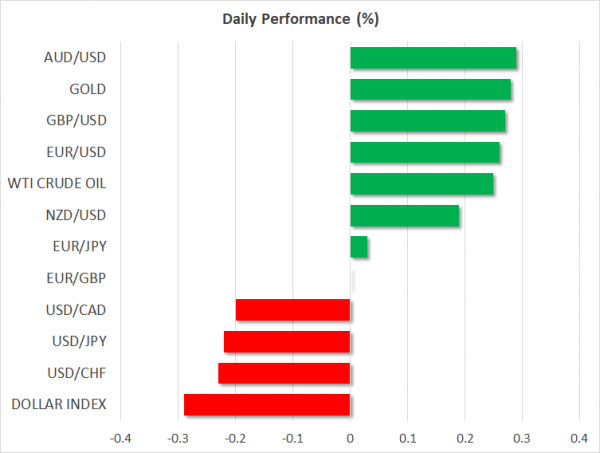 Tuesday’s calendar has not much to offer in terms of data in the remainder of the day, with Canadian wholesale sales and API’s weekly report on US crude oil stocks attracting interest.

Meanwhile in the Eurozone, political risks in Italy are expected to continue to weigh on investors’ sentiment as the two populist parties, the anti-establishment Five Star Movement and the right-wing League who managed to reach a coalition deal last week, seek to reform country’s fiscal policy to the detriment of EU’s spending plans. Particularly the Eurosceptic parties are said to oppose bloc’s immigration program as well as its Stability and Growth Pact. Giuseppe Conte has been proposed by the parties to take over as the next Prime Minister during yesterday’s meeting with the Italian President, Sergio Mattarella.

Updates on the Brexit front could move the pound as negotiations resume this week in Brussels. Note that Theresa May offered a “backstop” option to keep the UK tied to EU customs rules after the transition deal expires in December 2020 in an attempt to avoid a harder border in Northern Ireland if the sides fail to reach an agreement on the topic in time. Wednesday’s CPI readings out of the UK, though, are likely to be of greater interest to traders for now.

Trade developments would remain in the spotlight as the US and China decided on Sunday to suspend import tariffs and continue negotiations instead. Still, escalation in tensions between the countries is not expected ahead of a crucial US-North Korea summit on June 28-29. China’s decision to cut import duties on cars from 25% to 15% (effective from July 1) today also showed that China has no intentions to start a trade fight.

In equity markets, a testimony by Facebook’s Chief Mark Zuckerberg before the European Parliament today at 1615 GMT will gather attention. Zuckerberg is expected to acknowledge the inability of the tech company to protect data privacy amid an improper share of data with Cambridge Analytica – a British political consulting firm linked to Trump’s 2016 election campaign which shut down in April. That follows his apologizing testimony in front of the US Congress in the previous month, where his statements did not sound as harmful to company’s image as markets expected, boosting Facebook’s shares instead. Said that questions by European leaders could be more challenging than those asked by US lawmakers given that EU’s privacy rules are more restrictive than in the US.

US weekly crude oil stock readings reported by the American Petroleum Institute will have the potential to add volatility to crude prices at 1330 GMT. Should the numbers prove a build in inventories, prices could erase earlier gains.