Tuesday May 29: Five things the markets are talking about

U.S Treasuries have rallied alongside a number of core-European bonds as the political crisis in Italy and Spain deepens, triggering risk-off trading across capital markets.

The EUR (€1.1512) has tested fresh 11-month lows outright in early Euro trading after Italy’s president scuttled an attempt by a coalition of Italian antiestablishment parties to form a government. With fresh elections appearing increasingly likely, investors should expect the Five Star and the League to campaign on the idea that they were denied the “right to govern,” possibly resulting in a stronger populist sentiment at the next election. This would certainly pose risks to the European integration France and Germany are campaigning for.

Note: An Italian election would resemble a referendum, de facto, on the E.U and the single unit.

Meanwhile in Spain, parliament is set to vote Friday (June 1) whether to oust Prime Minister Rajoy and replace his center-right government with one led by the center-left Socialist Party after a Spanish court ruled that Mr. Rajoy’s Popular Party financially benefited from an illegal kickback scheme.

On tap: U.S CB consumer confidence at 10 am EDT.

In Japan, stocks fell to one-month lows overnight, with investors selling cyclical shares as concerns over European politics added to the list of reasons to be cautious about the global economic outlook. The Nikkei average dropped -0.5%, the lowest close in four-weeks, while the broader Topix fell -0.48%.

Down-under, the Aussie shares ended higher on Tuesday, lifted by financials, though gains were capped by declines for consumer and telecom stocks. The S&P/ASX 200 index closed +0.2% higher. The benchmark declined -0.5% on Monday. In S. Korea, the Kospi also came under pressure closing down -0.9%.

In Europe, regional bourses open down across the board and have continued the trend as the session progresses. Declines in benchmark U.S. and German bond yields combined with continued uncertainty about regional politics is again put pressure on European bank shares. 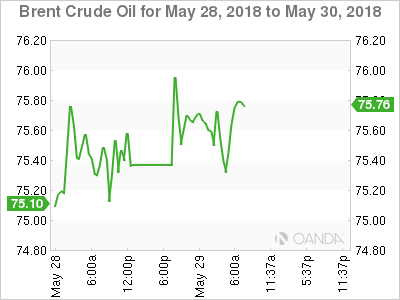 Oil prices remain under pressure from expectations that Saudi Arabia and Russia would pump more crude oil to ease a potential shortfall in supply.

Note: The spread between Brent and WTI stands at around +$8.7 a barrel, the widest since March 2015 due to the depressed price of U.S crude compared to Brent.

Concerns that Saudi Arabia and Russia could boost output have put downward pressures on oil prices; along with rising oil production in the U.S.

Both parties have discussed raising OPEC and non-OPEC oil production by some +1m bpd to make up potential supply shortfalls from Venezuela and Iran. Critics don’t believe there is enough time to hammer out a deal before the next OPEC meeting.

Note: OPEC is due to meet in Vienna on June 22.

Ahead of the U.S open, gold prices have eased a tad as a stronger U.S dollar continues to weigh on the market amid renewed hopes of an U.S/North Korea summit. Spot gold is -0.1% lower at +$1,296.91 per ounce, while U.S gold futures for June delivery fell -0.6% to +$1,296.40 per ounce. Nevertheless, expect the yellow metal to find safe haven support on pullbacks. 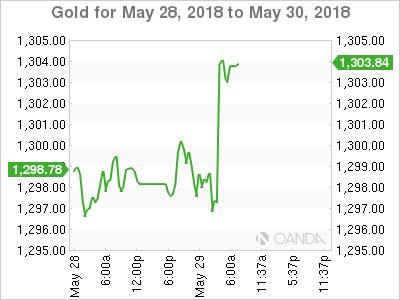 In coming back online after the Memorial Day weekend, U.S Treasury’s have found strong support amid geo-political uncertainty – Italy, Spain and N. Korea.

Italian government debt prices have slid hard since the country’s president scuttled an attempt on the weekend by a coalition of Italian antiestablishment parties to form a government after March’s elections.

The new possibility of fresh elections in the fall has sent the Italian 10-year government BTP bond yield higher, +2.865% from +2.36% early yesterday, while the interest-rate spread over similar German bunds has widened above +250 bps, the highest in five-years, indicating a high level of market stress. 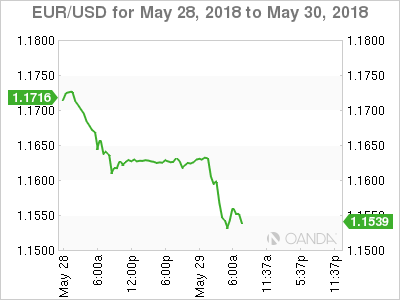 Geopolitical uncertainties favor safe-haven flows – USD, CHF and JPY currencies in the overnight session. The USD Index is again trading atop of its seven-month highs.

EUR/USD has extended its losses, falling to a 11-month low of €1.1512 ahead of the U.S open. As noted above, the slide in the German Bund yield and the widening spread between Bunds and Italian BTP yields is likely to push the ‘single unit’ down further.

The yen currency is firmer with USD/JPY testing below ¥108.50 and EUR/JPY registering its largest decline in four-months as the cross tested the lower area of the €125.42 handle, down -1.1%.

Elsewhere, consumer confidence in Sweden has fallen below market expectations in May to 98.5 from 100.3 in April and has sent EUR/SEK up to a two-week high of €10.3401 and this despite the EUR being battered by Italian politics. 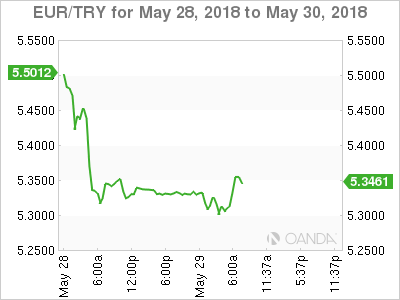 5. The Central Bank of Turkey pledges to simplify rates

Yesterday, Turkey’s central bank (CBoT) decided to complete the simplification of its monetary policy by setting the one-week repo rate as the policy rate, which will be equal to the current funding rate of +16.5%, in a move to support the TRY.

The central bank’s simplification process aims to adopt “a single rate to set policy instead of using multiple interest rates.”

CBoT’s overnight borrowing and lending rates will be determined at +150 bps below/above the one-week repo rate and the new operational framework will take effect on June 1.

Note: CBoT took emergency action last week, raising one of its interest rates by +300 bps, in a bid to stop TRY’s fall ahead of presidential and parliamentary elections next month. 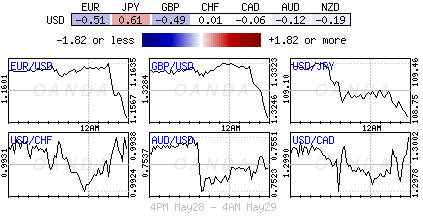