The Euro welcomed the victory of centrist candidate Emmanuel Macron on the first round of French presidential election and gapped higher around two hundred pips against the dollar on Monday’s market opening. EURUSD surged on relief from fears of Frexit scenario on victory of anti-EU candidate Marine Le Pen. Macron took 23.8% of the votes on the first round of election while Le Pen was the second with 21.7% votes and these two candidates are going to the final round.

Polls show strong advantage of Macron and expect his victory by 20 percentage points.

The Euro surged to fresh 5 ½ month high against dollar at 1.0916 in early Monday’s trading but eased back around hundred pips and stayed within 1.0820/77 consolidation during the most of Monday’s trading.

Close above 200SMA is needveled to maintain immediate bullish bias for fresh upside, as regain of 1.0916 high would signal extension towards psychological 1.1000 barrier. 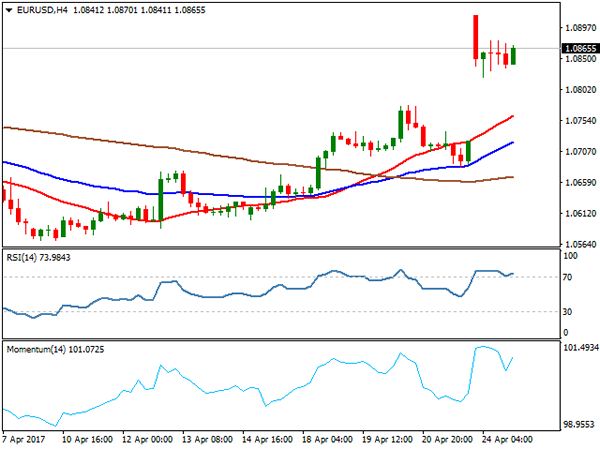 USDJPY pair opened with gap higher on Monday, boosted by fresh risk appetite that prompted traders out of safe haven yen longs and pushed the dollar higher. Fresh strength spiked at 110.52, where rally was capped by falling Kijun-sen and reversed below cracked psychological 110.00 level. Near-term bias is turning higher after pivotal barriers at 110.00/25 were dented, however, daily close above these levels (reinforced by 20SMA) is needed to generate stronger bullish signal for extended recovery from 108.11 low and possible full retracement of 111.57/108.11 descend.

Dips from fresh high at 110.52 were so far contained by strong supports at 109.84/70 (top of thick 4-hr chart / 4-hr Tenkan-sen) and while these supports hold, fresh upside attempts will remain in play. 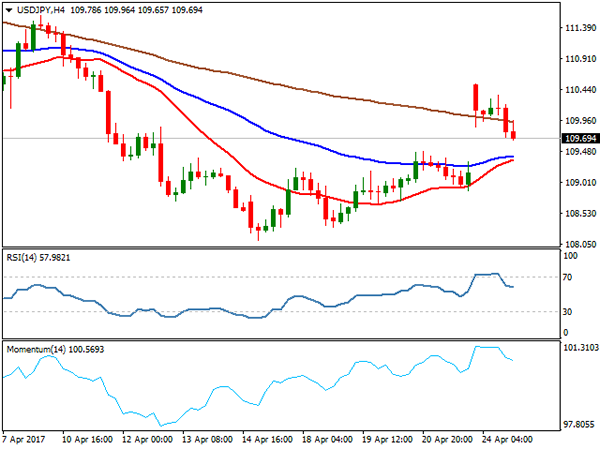 No clear direction is seen while the pair holds within consolidation range, however, risk of deeper pullback exists on bearish signal generated on reversal of daily RSI / slow stochastic from overbought territory. 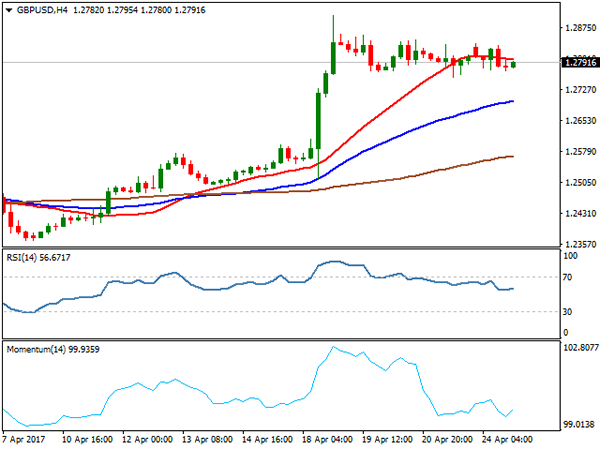 The AUDUSD pair is on track for daily close in red after spiking to 0.7584 on gap-higher opening, but was unable to hold gains despite repeated attempt towards the daily high.

However, overall structure is expected to remain biased higher on daily close above 200SMA at 0.7550, which was taken out on Monday’s gap-higher opening.

While the price is holding above 0.7550, fresh upside attempts could be anticipated, with break above day’s high at 0.7584, needed to open key near-term barrier at 0.7610 (top of thick daily Ichimoku cloud, reinforced by Kijun-sen line) also former high of Apr17. 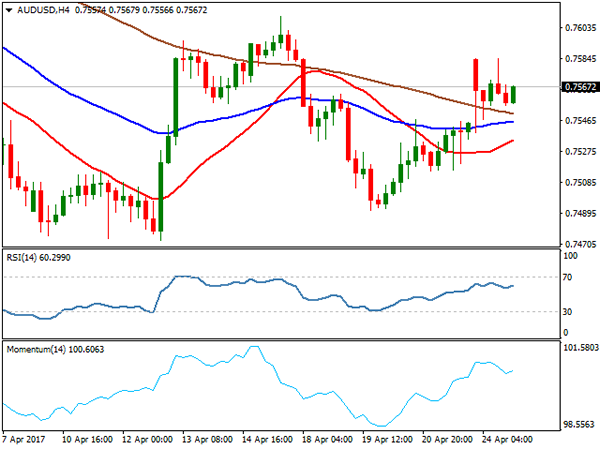 The GBPCAD cross remains firm and consolidating under last week’s fresh high at 1.7340 (the highest since mid-Sep 2016), with long-tailed candles of past two days, signalling strong downside rejections and continuing to underpin the action.

Strong bulls on daily chart are supportive for further upside and ignoring for now overbought conditions. The pair may extend to 1.7524/42 (highs of Sep 11 / July 31 2016 respectively) on fresh bullish acceleration through recent high at 1.7340, however, risk of corrective easing should be anticipated, despite lack of firmer bearish signals for now. 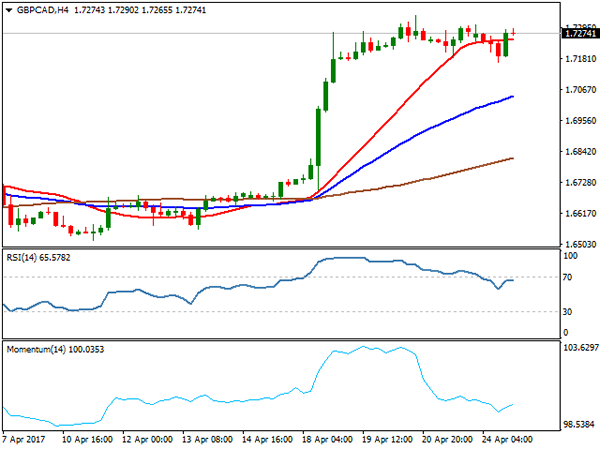 Spot Gold opened with gap-lower on Monday, pressured by renewed risk appetite that moved traders’ bets from safe haven instruments to riskier assets. Gold price spiked to $1265 low on Monday (rising 20SMA), after opening lower for $10, but managed to recover most of day’s losses on return to $1275, former strong support (Fibonacci 38.2% of $1239/$1295 rally, reinforced by rising daily Tenkan-sen line).

Such scenario would turn near-term focus higher and signal an end of corrective phase from $1295 peak.

Otherwise, downside is expected to remain vulnerable while the price holds below $1275 pivot. 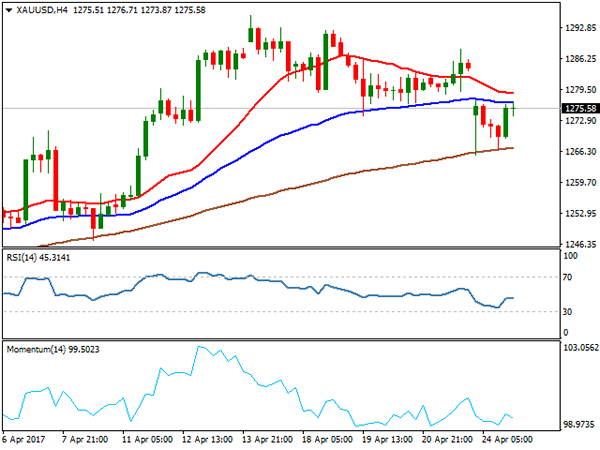 WTI crude oil extended losses further on Monday, being in red for the sixth consecutive day, as investors are not sure whether OPEC would seek to extend the current deal to curb global supply amid rising levels of U.S. shale oil production. Oil price fell to fresh nearly one-month low at $49.05 on Monday, coming ticks ahead of strong support at $48.99 (200SMA), after strong bearish signal was generated on last Friday’s break and close below psychological $50.00 support.

Long bearish candle of last week weighs heavily at near-tem action for final break below 200SMA ($48.99) and weekly Kijun-sen line at $48.70 that would open way towards key support – higher base at $47.07.

Meantime, corrective attempts could be expected on oversold daily slow stochastic, with solid barriers at $50.40 (broken daily Kijun-sen) and $50.74 (daily Ichimoku cloud base) expected to cap. 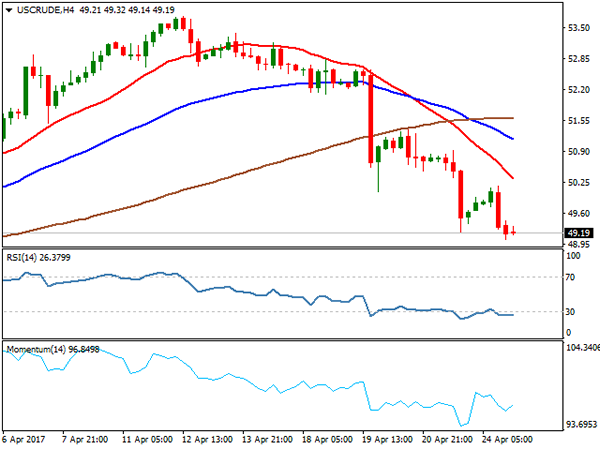 Stocks were higher on Monday on renewed demand for risk assets and dragged Dow Jones index higher to eventually break above 20SMA (currently at 20552) which capped the action of past five days.

Gap-higher opening on Monday and subsequent bullish acceleration is pressuring key barrier at 20738 (top of thick daily Ichimoku cloud, also 50% of entire 21160/20310 pullback) to signal further recovery on close above the cloud.

However, hesitation at strong 20738 barrier could be expected as slow stochastic entered overbought zone on daily chart. Daily 55SMA which holds Monday’s action at 20630 marks initial support, with extended dips to be contained above 20SMA to keep fresh bulls in play. 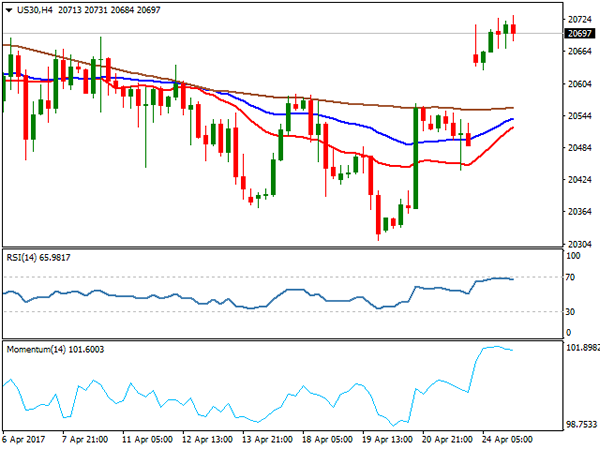 FTSE index rallied strongly on Monday and retraced 76.4% of last week’s sharp fall, on biggest one-day gain since Mar 1. Strong bullish acceleration that was sparked week’s opening with gap higher, penetrated into daily Ichimoku cloud and closed above cloud base. Fresh bullish sentiment that was established on today’s strong recovery rally is eyeing immediate barrier at 7238 (daily Kijun-sen), break of which would open way towards daily cloud top at 7273 and signal full retracement of 7285/7032 fall, sparked by announcement of early election in the UK.

Technical studies on daily chart are supportive, as RSI and slow stochastic reversed from oversold territory and show a plenty of room at the upside.

Broken daily Tenkan-sen ant 7189 and 100 SMA at 7149 offers solid supports which are expected to keep the downside protected. 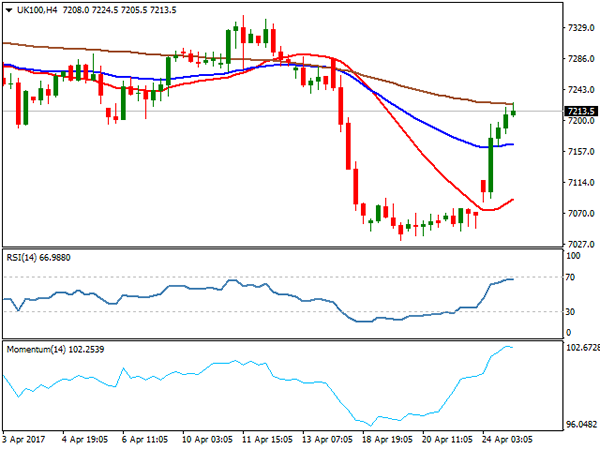 DAX surged after opening with over 200 points gap-higher on Monday and hit fresh all-time high at 12502. Strong rally in stocks came on relief on victory of Emmanuel Macron on the first round of French election that neutralized persisting fears in the markets of further destabilization of the EU on Frexit scenario. Monday’s rally marked the biggest one-day f=gains since Mar 1, as the price spiked to fresh record high and entered into uncharted territory.

Firm bullish structure of technical studies on larger timeframes and today’s close above former record high at 12410, suggest further advance that is also expected to be driven by fresh bullish sentiment. Dax will be looking for projected level at 12581 and 12687 (Fibonacci 1382% and 161.8% projection of the upleg from 11962), with shallow corrective dips expected to hold above 12300 handle. 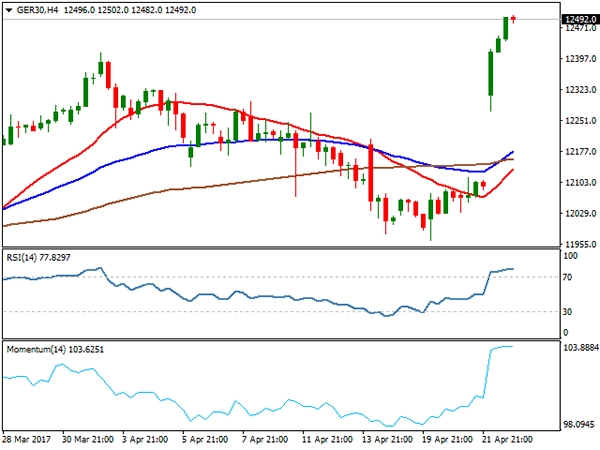