The Euro soared to fresh 5 ½ month high at 1.0949 on Tuesday, on renewed strength after Monday’s pullback from previous high at 1.0916 was contained by weekly Kijun-sen line at 1.0819. The single currency was driven by strong bullish sentiment on victory of centrist candidate Emmanuel Macron on the first round of French presidential election. In addition, the Euro got boosted from overall weaker dollar on mixed US data (Consumer Confidence dropped to 120.3 in April, well below forecast at 122.5) while US New Home Sales hit an eight month high at 621K compared to forecast at 583K, which added to the story of strengthening US economy.

Investors are awaiting more details about President Trump’s tax reform which is expected to include a massive tax cut for individuals and businesses and is expected to be unveiled on Wednesday.

The EURUSD pair is on track for strong bullish close on Tuesday and eyeing psychological 110.00 barrier initially, as break higher would extend through Fibonacci 138.2%projection at 1.1034 towards magnetic weekly Ichimoku cloud base at 1.1067 (the cloud is thinning and is going to twist next week that would further attract the pair to test it).

Broken 200SMA offers solid support at 1.0837, with repeated close above it to confirm break higher and further bullish extension. 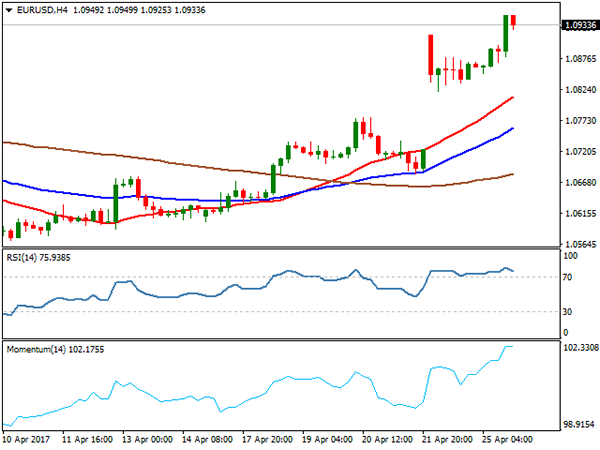 The US dollar regained strength against Japanese yen on Tuesday and rallied strongly from double-bottom at 109.60 zone, where downside attempts were contained by north-turned daily Tenkan-sen. The pair surged through Fibonacci 61.8% and 76.4% barriers at 110.25 and 110.76 and also probed above round-figure 111.00 barrier.

Fresh strength of the dollar came after traders started exit long in safe haven yen and focused riskier assets that strongly lifted the price for the biggest one-day gains since Feb 9.

Fresh rally is approaching key barriers at 111.36/57 ( top of thick weekly Ichimoku cloud / previous double upside rejection), break of which would signal stronger correction of 115.50/108.11 downleg on extension to 112.00+ levels. 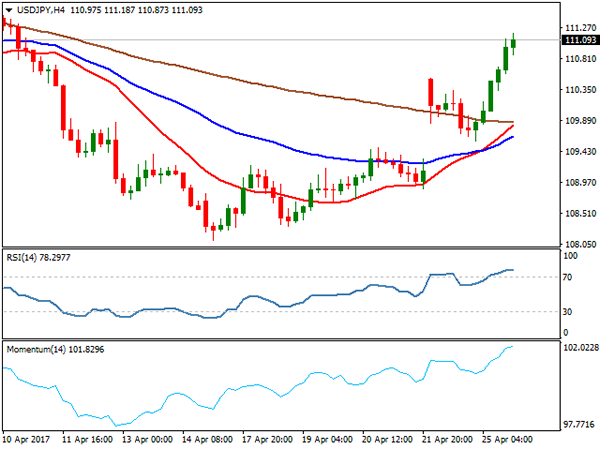 GBPUSD stayed within 1.2770/1.2859 range on Tuesday, showing no significant changes in its near-term directionless mode. Strong support has established at 1.2770, where multiple downside rejections occurred in recent days, with support being reinforced by Fibonacci 38.2% of 1.2514/1.2905 upleg at 1.2755.

Tuesday’s action was slightly positive and on track for bullish end of the day, however, clearer direction signal could be expected on break of either range boundary.

Technical studies are bullish on near-term and daily timeframes, however, reversal of slow stochastic from overbought zone on daily chart continues to weigh and maintain risk of deeper pullback which may extend towards 1.2700 (ascending daily Tenkan-sen).

Conversely, firm break above near-term congestion would shift focus higher for retest of multi-month high at 1.2905 and look for psychological 1.3000 barrier in extension. 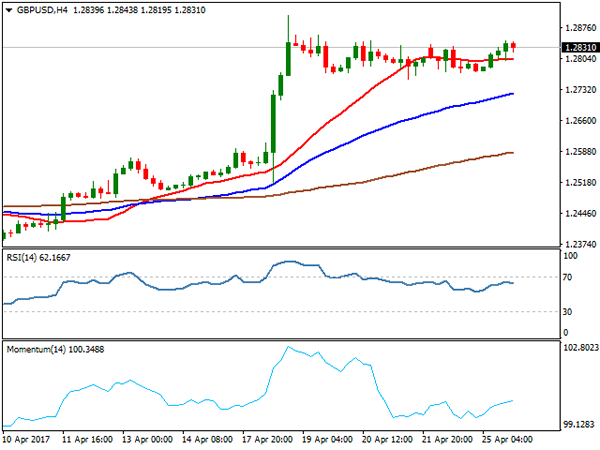 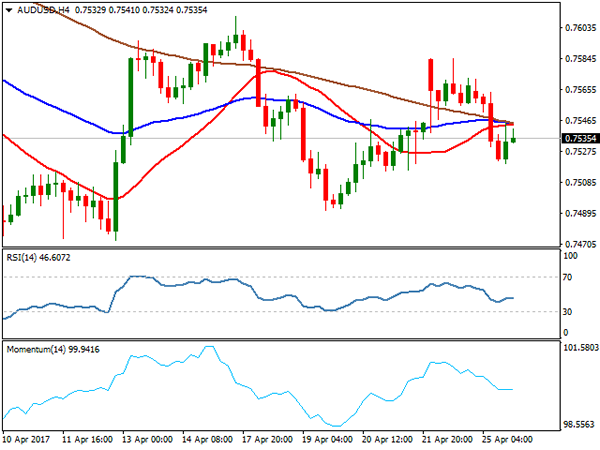 The GBPCAD pair continues to trend higher and rallied strongly on Tuesday to fresh high near 1.7500 barrier, posting the highest levels since mid-Sep. Loonie remains under pressure which has intensified on Tuesday amid concerns over an escalating dispute with the U.S. over the terms of the North American Free Trade Agreement. 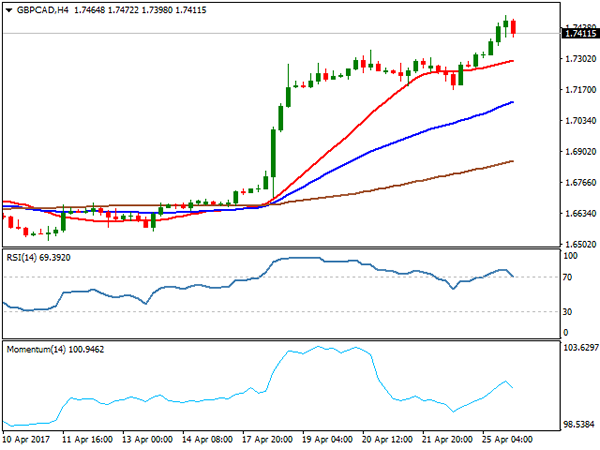 Spot Gold fell further on Tuesday and ended day firmly in red, on fresh bearish acceleration that hit low at $1261 (rising daily Kijun-sen / Fibonacci 61.8% retracement of $1239/$1295 rally. Fresh weakness was triggered after repeated upside rejection of attempts to fill Monday’s gap, as rallies were capped by broken daily Tenkan-sen line and on heavy migration from safe haven gold into riskier assets on renewed risk-appetite in the markets.

Tuesday’s fall (the biggest one-day loss since Mar 2) has weakened Gold’s structure. Near-term technicals turned into firm bearish mode, while daily studies are losing traction and see risk of extension towards key supports at $1254 (200SMA) and $1247 (Apr 10 trough). Break and close below $1261 pivot is needed to confirm scenario. 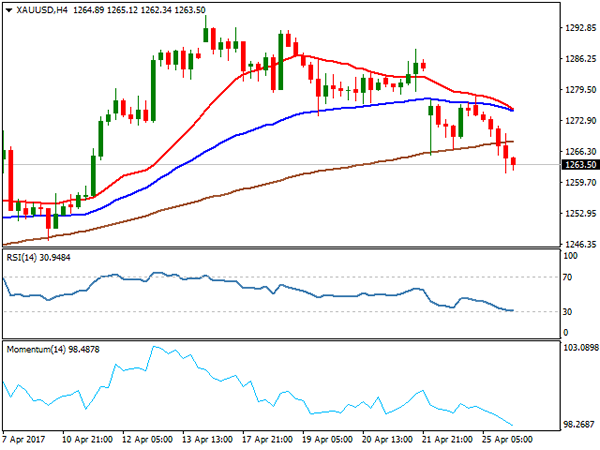 WTI crude oil showed initial signals of stabilization after steep fall from recovery top at $53.74 was contained by 200SMA at $49.01. Subsequent bounce that is eyeing psychological $50.00 barrier is on track for the first bullish daily close after six straight days in red.

Strong bearish sentiment that has been established of recent bearish acceleration, driven by fears in the markets about extension of OPEC’s production cut and rising production of US shale oil, keeps risk at the downside, as firm break below 200SMA pivot would trigger fresh acceleration lower and expose key supports at $47.07.

Meantime, current bounce is seen as corrective action which should be ideally capped by daily Kijun-sen at $50.41 and base of widening daily Ichimoku cloud at $50.74.

Otherwise, stronger correction of $53.74/$49.01 downleg could be anticipated and may extend gains towards next pivot at $51.05 (daily Ichimoku cloud top). 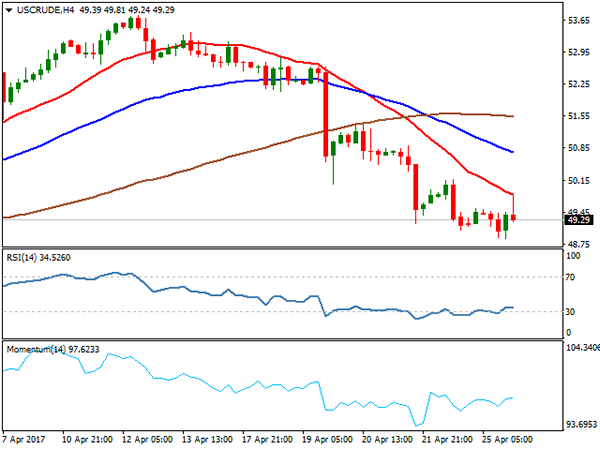 Dow Jones surged on Monday and registered the biggest one-day rally since Mar 1 on acceleration through daily Ichimoku cloud top pivot at 20774 and peaked at 20966 (Fibonacci 76.4% of pullback from fresh record high at 21160 to 20310 (Apr 19 correction low).

Extension of strong recovery rally from 20310, which included Monday’s gap-higher opening, maintains strong bullish sentiment for return to 21160 peak. The notion is supported by close above daily cloud and fresh bullish momentum on daily studies that underpins the action. 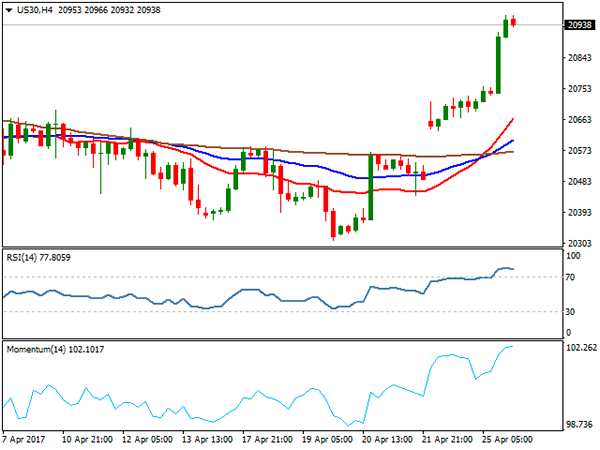 Cloud’s base at 7234 has capped today’s bullish extension and the price may show hesitation here, however, bullish outlook keeps near-term focus firmly at the upside.

Broken Tenkan-sen at 7189 is expected to contain dips and keep the structure intact. 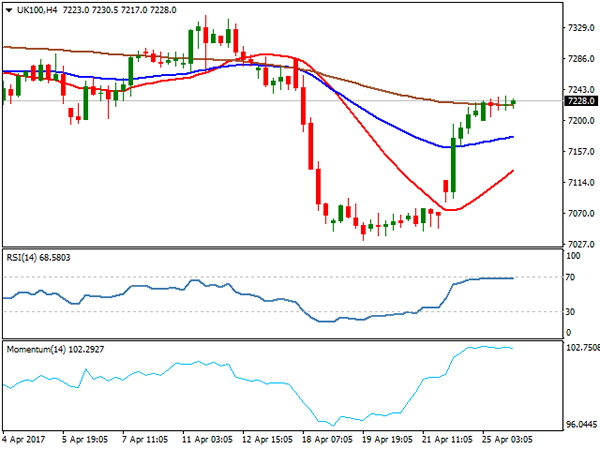 DAX maintains strong bullish tone and extended gains on Tuesday to fresh record high at 12518. Dax appreciated relief in the markets on fading fears of possible Frexit scenario on victory of anti-EU candidate on French election.

Technical studies maintain firm bullish structure on larger timeframes and series of higher highs suggest further upside, driven by fresh bullish sentiment. Fresh bullish extension is looking for projected level at 12581 and 12687 (Fibonacci 138.2% and 161.8% projection of the upleg from 11962 respectively), with shallow corrective dips expected to hold above 12300 handle (Fibonacci 38.2% of 11962/12518 rally). 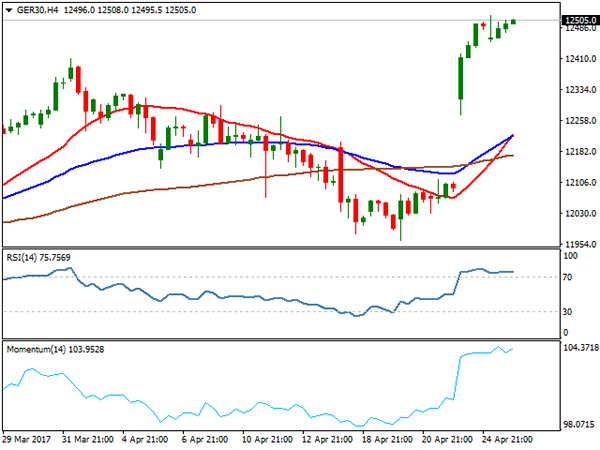