USDTRY Sets Another Record High But Rally Could be Overstretched

USDTRY hit a new all-time high of 5.4243 yesterday before prices pulled back a little today. The upside momentum had eased between May and July but started to gain traction again during August.

Momentum indicators are holding firmly in the bullish zone but warn of a possible overextended rally. The RSI has crossed into overbought territory above 70 and is now pointing downwards, suggesting a weakening of the positive momentum. The stochastics paint a similar picture with the %K line posting a bearish crossover with the slower moving %D line in the overbought region.

Should USDTRY continue to head higher, the next major resistance will likely come from the 423.6% Fibonacci extension of the downleg from 4.9786 to 4.7348, around 5.7675. A climb above this barrier would put the focus on the psychological 6.0000 level. But first, the pair would need to overcome immediate resistance at the 261.8% Fibonacci extension around 5.3730.

However, if today’s losses developed into a downside correction, support should initially come at the 161.8% Fibonacci extension at 5.1300. Further down, the July 12 swing high would likely provide support at 4.9786, while below that, the 50% Fibonacci at 4.8565 should be watched.

Looking at the more longer-term outlook, the pair remains on a clear uptrend, which has steepened sharply in recent months. 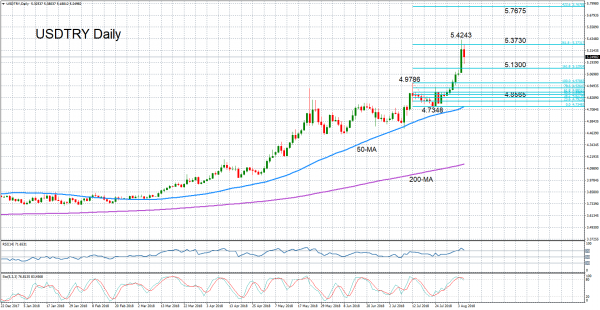