Turkish lira fell around 1.5% against dollar after news that Turkey’s court released US pastor from prison. This scenario was widely expected, and market reaction was on ‘buy rumor – sell fact’ mode as lira rose to the highest since mid-Aug in days prior to court decision and was sold after the verdict. Improvement in US – Turkey relations is now expected, which could further boost Turkish currency in coming days / weeks. The USDTRY pair holds in the downtrend for over one month, with lira being additionally supported by more radical action of Turkish central bank in September and the pair tested one of key supports at 5.8097 (daily cloud base) which resisted initial attack, but is expected to remain under pressure. Bearishly aligned daily techs add to pair’s negative outlook. Eventual break below thick daily cloud would provide fresh bearish signal for test of next key support at 5.6875 (16 Aug low of pullback from new record high at 7.1043). Bear-cross of 10/55SMA’s (6.0500) marks strong resistance which is expected to cap upticks and keep bearish bias. 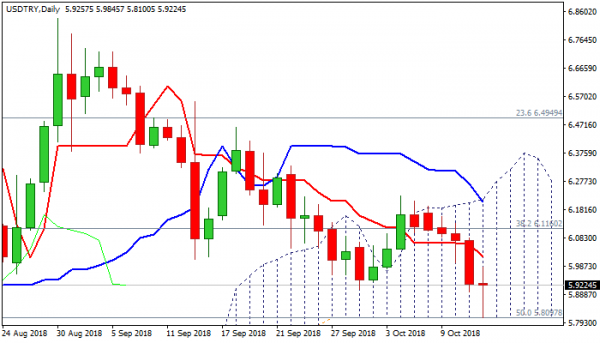