The Japan 225 index has been outperforming since yesterday following the bounce off the 20780 support level. The aggressive bullish scenario is confirmed by the technical indicators; the RSI jumped higher from the oversold zone, sloping upwards, while the MACD is moving slightly higher, approaching the trigger line but stands below the zero line.

Should the index manage to strengthen the positive momentum, the next immediate resistance could come near the 22174 barrier, but the price needs first to post a closing day above 21830. A break above 22174 would challenge the 20-day simple moving average (SMA) near 22378 at the time of writing. The next level higher for investors to have in mind is the 22940 resistance, which stands near the 40-day SMA.

However, if prices create a pullback on 21830 and head lower, this would turn the risk to the downside towards the 20780 support. Below this level, the next target could come from the 20322 support, identified by the trough on March 26.

When looking at the bigger picture the price does not have a clear directional movement in the medium-term, however, in a longer timeframe the index has been creating an ascending movement since June 2016. 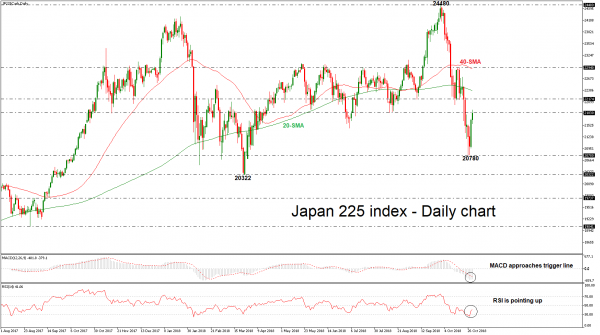