The EUR/USD pair traded as high as 1.0989 this Monday, as the greenback remained on the back foot after worse-than-expected data released last Friday, further undermined early US session by a downside surprise in the NY Empire State manufacturing index, which showed that business activity in the region fell sharply according to the survey, down to -0.1 from previous 7.0. Dollar’s decline paused after the release of the US NAHB house market index, as builders’ confidence strengthened, with the index up to 70 in May from previous 68, but overall, the American currency remained weak, as the market is having second thoughts about a June Fed’s hike. A sharp recovery in oil prices, after Russia and Saudi Arabia said they favor extending the oil output cut until March 2018, also weighed on the greenback. The European macroeconomic calendar will be quite busy this Tuesday, with the German ZEW survey, and the EU Trade Balance and Q1 preliminary GDP, this last expected at 0.5%, matching the last quarter of 2016.

The pair eased down to the 1.0970 region, where it spent most of the US afternoon, consolidating gains. From a technical point of view, the pair retains its bullish stance, with scope to extend its advance beyond the yearly high set earlier this month at 1.1020. Technical indicators in the 4 hours, have eased within overbought readings, but are far from changing course, whist the 20 and 100 SMA advanced below the current level, both now in the 1.0900 region. Stops have likely increased above 1.1020, last week’s peak, with and advance beyond it probably resulting in an upward acceleration towards 1.1060. 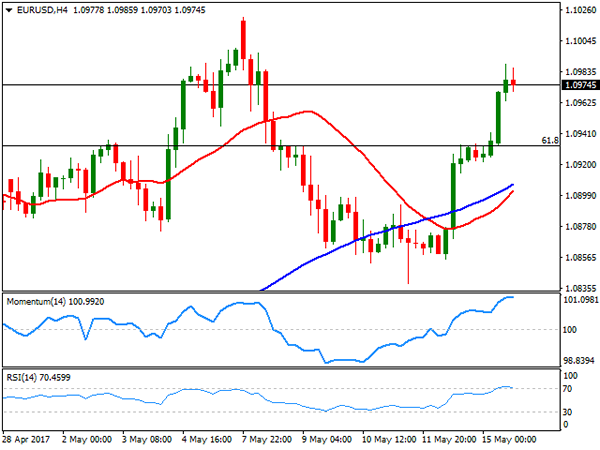 The USD/JPY pair closed the day with modest gains around 113.70, recovering some ground late in the US afternoon on a modest up-tick in US Treasury yields. After starting the day with a weak tone, the greenback pared losses and managed to regain some ground against most of its major rivals, ending in positive territory, however, only against the Japanese yen. Limiting the safe-haven currency’s gains were advances in most major indexes around the world. Japan will release its April Tertiary Industry Index during the upcoming Asian session, expected at 0.1% from previous 0.2%. In the meantime, and from a technical point of view, the downward pressure has eased on the pair, as the price bounced once again from the 113.20 region. Furthermore, the 4 hours chart shows that the price holds well above a bullish 100 SMA, now around 112.30, whilst technical indicators turned north, and are currently crossing their mid-lines into positive territory. Still, the pair needs to recover above 114.00 to be able to extend its gains beyond the monthly high and up to 114.50, a major Fibonacci resistance. 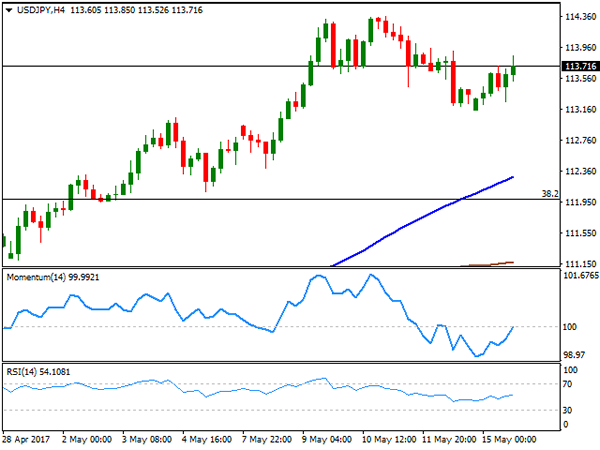 The GBP/USD pair advanced up to 1.2940 at the beginning of the day, but trimmed all of its gains and settled at 1.2880 region, pretty much unchanged from Friday’s close. There were no macroeconomic releases in the UK, with the pair led by dollar’s self weakness/strength. PM Theresa May spoke to voters through a live Facebook Q&A, but added nothing new to the Brexit case, focusing more on campaigning towards the upcoming June election. On Tuesday, the UK will release multiple inflation figures for April, which if higher-than-expected, could result in a stronger Pound, as market players will rush to price in a soon-to-come rate hike in the kingdom. Short term, the pair is now at risk of extending its slide, given that in the 4 hours chart, the price was unable to sustain gains above a bearish 20 SMA, now back below it, whilst the Momentum indicator holds flat around its 100 level and the RSI indicator turned south, now around 44. The pair needs to advance beyond 1.2960 to turn bullish, while below 1.2830 the risk turns towards these last weeks’ range in the 1.2760/70 region. 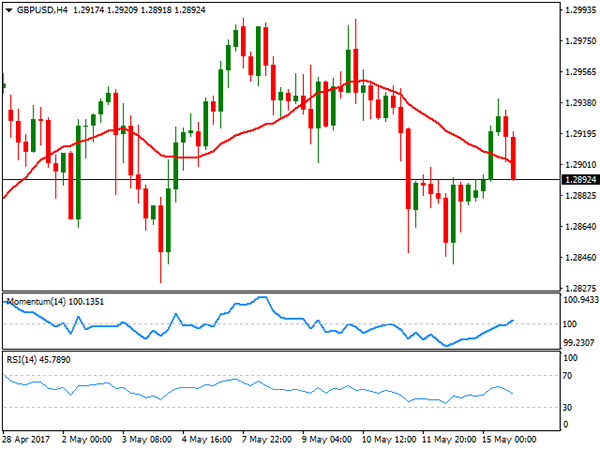 Gold prices advanced this Monday beyond last week’s highs, with spot peaking at $1,237.26 a troy ounce, but trimmed most of its daily gains to end the day barely higher at 1,231.00. Broad dollar’s weakness was behind the early decline, but slipped on low physical demand and a bounce in the American currency. The daily chart shows that the price settled around a bearish 200 DMA after failing around the 100 DMA, whilst the 20 DMA maintains a strong bearish slope well above this last. In the same chart, technical indicators have lost upward strength and turned flat within bearish territory, suggesting the latest recovery was unsustainable and that the risk remains towards the downside. In the 4 hours chart, the 20 SMA heads higher below the current level, providing support at 1,226.60, while technical indicators turned lower within positive territory, not enough to confirm additional declines, but also limiting chances of a steeper recovery. 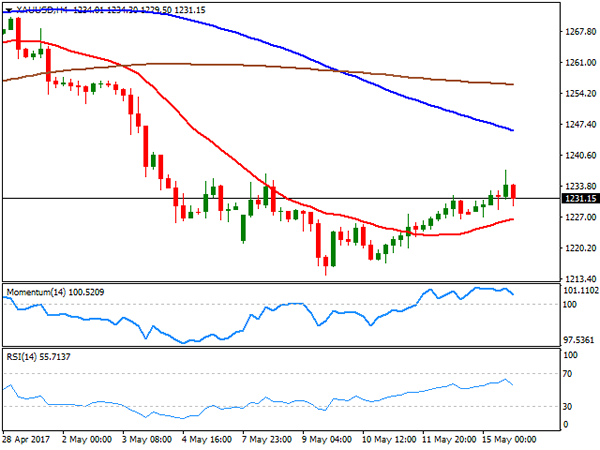 West Texas Intermediate crude oil futures closed the day at $48.79, its highest settlement for this May, boosted by comments from Saudi Arabia and Russia oil ministers, saying that they could extend their output cut deal until March 2018. The positive mood among oil traders, however, may quickly turn sour, if US data continue indicating rising production in the world’s largest economy. From a technical point of view, the daily chart shows that the price advanced well above a still bearish 20 DMA, while technical indicators head north, albeit holding within their mid-lines. In the shorter term, and according to the 4 hours chart, the upward looks a bit more constructive, given that the Momentum indicator has bounced from its mid-line, while the RSI indicator also turned modestly higher after correcting overbought conditions, although both stand below previous highs. In the same chart, the 20 SMA is crossing above the 100 SMA, both around 48.00, providing now a strong support in the case of a downward move. 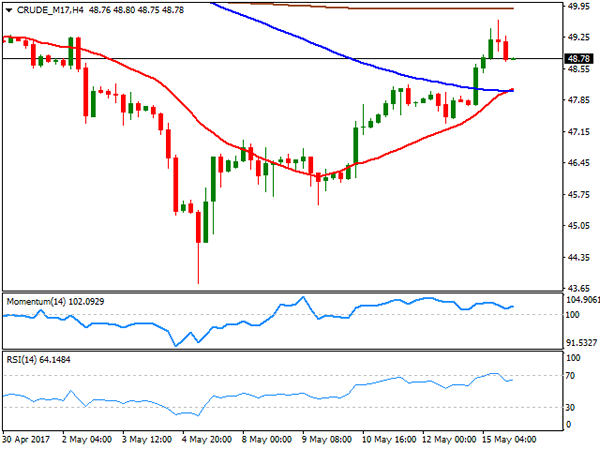 US indexes closed in the green, with the Dow Jones Industrial Average adding 85 points to end at 20,981.94, fueled by an advance in retail and energy-related equities. The Nasdaq Composite added 28 points, to 6,149.67, while the S&P added 0.48% and closed at 2,402.32, both hitting fresh intraday records. Equities shrugged off a negative manufacturing report released at the beginning of the day, taking the lead from an almost 3% advance in oil prices, on renewed hopes worldwide producers will keep on battling against the market’s glut, and strong gains in cybersecurity companies. Within the Dow, Johnson & Johnson was the best performer by adding 2.72%, followed by Cisco Systems that advanced 2.33%. Verizon Communications led losers by shedding 1.03%, followed by Nike that closed 0.79% lower. The DJIA maintains a neutral stance in its daily chart, still hovering around a modestly bullish 20 SMA, and with technical indicators turning higher around their mid-lines. Shorter term, and according to the 4 hours chart, the index is also biased higher, holding well above its moving averages, although technical indicators lost their upward momentum within positive territory, indicating that an advance beyond 21,000 the daily high, is required to confirm further gains. 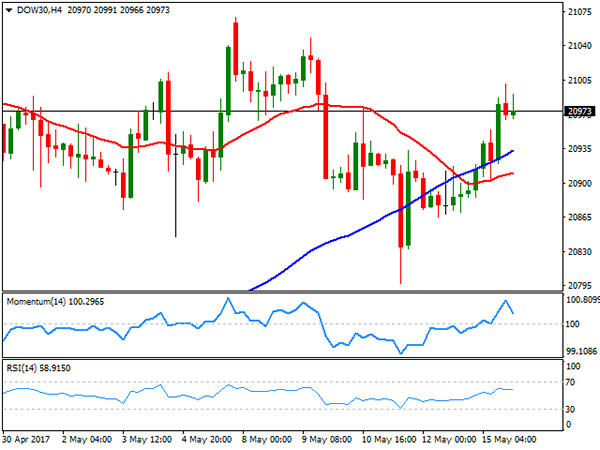 The FTSE 100 advanced 19 points to settle at a new record high of 7,454.37, bolstered by commodity-related equities and persistent weakness in the British Pound. Anglo American led gainers, adding 3.22%, followed by Glencore which added 3.16%. BHP Billiton closed 2.28% as oil prices rallied. TUI was the worst performer, shedding 4.79%, followed by Next that lost 1.86%. The benchmark advanced further in after-hours trading, supported by a strong advance in Wall Street and currently at 7,464. From a technical point of view, the daily chart shows that the RSI indicator heads north around 67, while the Momentum indicator diverges from the index, having retreated from overbought territory. In the same chart, the 20 and 100 SMAs converge heading north around 7,270. Shorter term, the 4 hours chart shows that the index keeps posting higher highs and higher lows, holding far above a sharply bullish 20 SMA, whilst the RSI indicator heads north around 82 as the Momentum losses upward strength between positive territory, somehow warning of a possible bearish corrective move for the upcoming sessions. 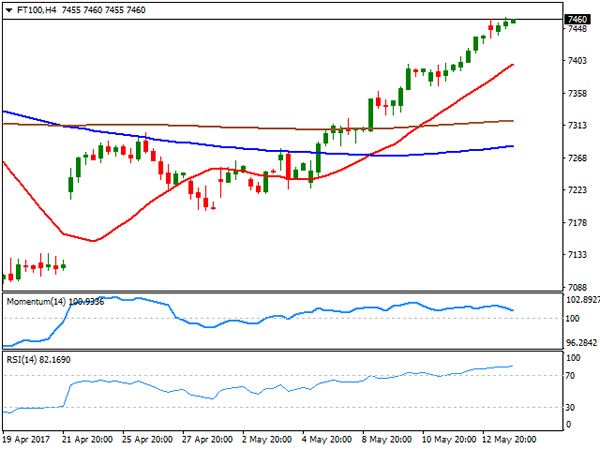 European major indexes closed with gains this Monday, with the German DAX peaking to a new record high of 12,839 intraday and settling at 12,807.04, up 36 points or 0.29% on the back of gains in the financial and utilities sectors, and a recovery in commodities prices. RWE AG was the best performer within the German benchmark, adding 3.84%, followed by Commerzbank that gained 3.04%. Fresenius Medical Care led decliners, shedding 1.10%, followed by Merck that closed 1.07% lower. Heading into the Asian opening a few points above the mentioned close, the daily chart shows that the index advanced further above strongly bullish moving averages, as the RSI heads marginally higher around 71, but the Momentum indicator turned sharply lower within positive territory, diverging lower and favoring a downward corrective move for the upcoming session. In the 4 hours chart, intraday declines met buying interest around a bullish 20 SMA, this last now at 12,755, while technical indicators lack directional strength, but hold within positive territory. 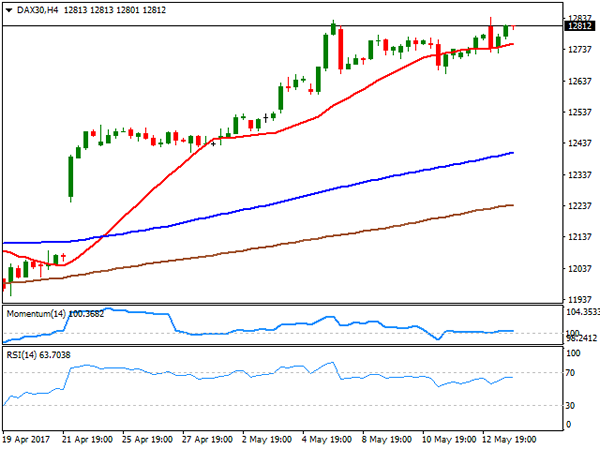