Risk aversion took its toll over the financial world this Wednesday, with US-related assets under heavy selling pressure amid Trump’s latest scandals involving Russia. The American currency was threading water at the beginning of the day, but finally capitulated with Wall Street opening, with the Dow putting in a three-digit lost in the first minutes of trading. The EUR/USD pair corrected intraday down to 1.1081 before resuming its advance, reaching fresh yearly highs of 1.1149 during the American afternoon, holding nearby ahead of the daily close. Macroeconomic data had little to do with price action, as sentiment offset news. Nevertheless, once the dust settles the market will remember that European inflation remain at its highest ever since easing began in the region, rising at an annual pace of 1.9% in April. Monthly basis CPI was up by 0.4%, half the advance of March, but in line with market’s expectations, lifting odds of sooner tapering in the EU.

The EUR/USD pair has now advanced straight for a fourth consecutive day, reaching overbought conditions in the daily chart, but with no signs that the ongoing advance has reached an interim top. In the 4 hours chart, technical indicators have eased modestly after reaching fresh extreme overbought readings, whilst the price stands far above bullish moving averages, also indicating that the rally may continue during the upcoming sessions. Wednesday’s low at 1.1080 is the level where buyers will likely re-surge in the case of pullbacks, although the downward corrective move can extend down to 1.1000 without actually affecting the dominant bullish trend. Fresh highs will have bullish implications, with room then for an advance towards 1.1260. 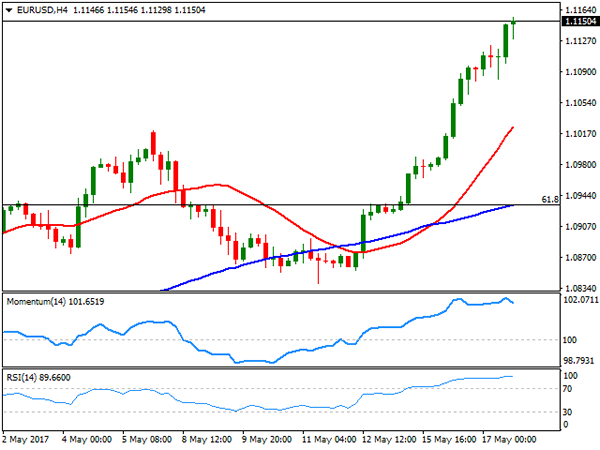 The USD/JPY pair shed whopping 200 pips this Wednesday, with the selling spiral accelerating early US session amid US political woes denting market’s sentiment. Speculative interest rushed into safe-havens and away from the greenback on escalating concerns surrounding US President Trump’s continuity, who is close to face an impeachment after new headlines saying that he pressed former FBI Director Comey to end an investigation on Michael Flynn, who was fired last February after it became known that he lied to Vice President Pence, on speaking with Russian Ambassador Kislyak about sanctions on Russia prior to Trump’s inauguration. The unstoppable decline in the pair persists into the Asian opening, despite extreme oversold conditions clear in intraday charts. Japan will release its Q1 preliminary GDP figures during the upcoming Asian session, but seems more likely that the pair will continue responding to risk sentiment. Technically, the 4 hours chart shows that the price has broken below its 100 and 200 SMAs, while technical indicators have barely decelerated within extreme oversold territory, with the RSI heading south around 20. The pair is at its lowest since late April, with an immediate support at 110.86, April’s 26th low, with a break below it exposing 109.90, the 50% retracement of the November/December rally. 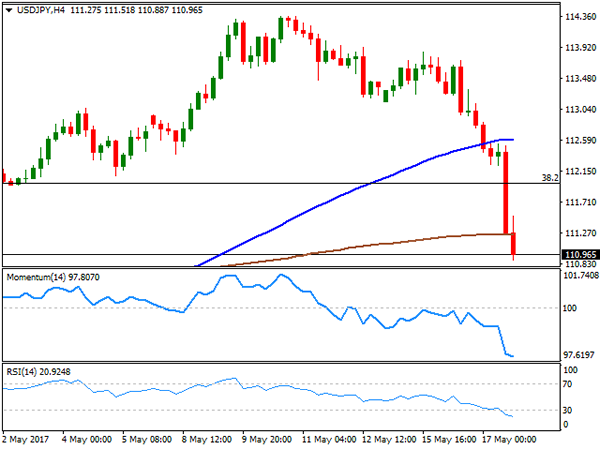 Despite ending the day higher against its American rival, the British Pound was one of the few currencies that were unable to capitalize broad dollar’s weakness. The GBP/USD pair peaked for the week at 1.2990, meeting once again strong selling interest just shy of the critical 1.3000 figure. In the data front, the UK released its latest employment figures which came in mixed. The unemployment rate fell to 4.6% in the three months to March, the lowest in over four decades, whilst the number of unemployed people fell by 53,000 to 1.54 million in the same period. Wages, however, increased by 2.1%, below market’s expectations and lagging behind inflation for the first time in nearly three years. The UK will release its April retail sales this Thursday, expected to have increased by 1.0% in the month after March’s 1.8% decline. From a technical point of view, and despite the inability of the pair to surpass the 1.3000 figure, the risk of a steeper decline is well limited by the absence of dollar’s demand. Technically, the 4 hours chart presents a neutral stance, with the price above a modestly bullish 20 SMA, but with the Momentum indicator having pulled back to its mid-line, and the RSI indicator having turned lower, now around 58. 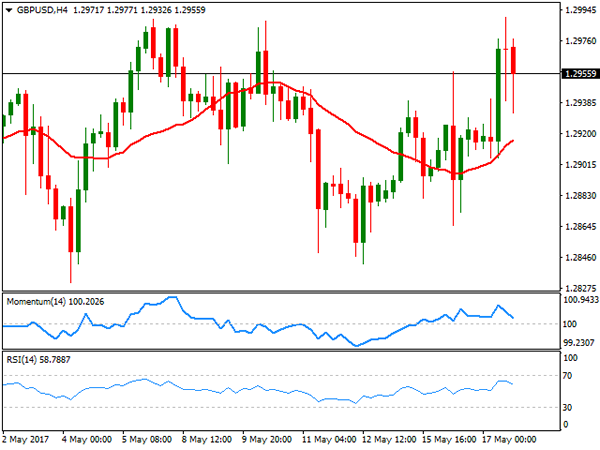 Gold prices rallied to fresh May highs, with spot settling at $1,257.89 a troy ounce after flirting with 1,260.20 earlier in the day, as US political woes escalated to the point that US president Trump is near an impeachment, boosting demand for the safe-haven metal, as attention is now far from Central Bank’s decisions. The commodity has broken above all of its moving averages in the daily chart that anyway remain flat, as the movement was quite abrupt, whilst technical indicators turned sharply higher, entering positive territory and suggesting a possible upward extension for the upcoming sessions, moreover if the political turmoil persist. In the shorter term, the 4 hours chart also favors additional gains, as technical indicators have barely pulled back within overbought territory before losing downward strength, whilst the price has settled above all of its moving averages, with the 20 SMA accelerating north, but still below the larger ones. 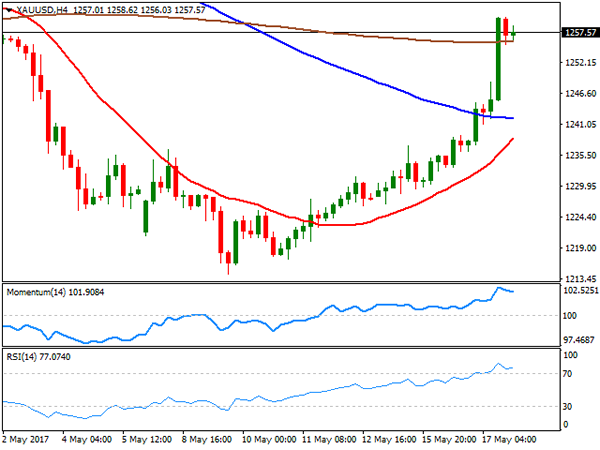 Crude oil prices recovered the ground lost on Tuesday, supported by better-than-expected market’s news. West Texas Intermediate crude futures settled at $49.00 a barrel, after the EIA reported yet another decline in US crude inventories. Official figures showed that stockpiles fell by 1.8 million barrels in the week ended May 12th, the sixth consecutive weekly drop. Gasoline stockpiles also declined, by 400K barrels, while distillates fell by 1.9 million barrels. The US benchmark traded as high as 49.48 intraday, stalling its recovery below previous’ weekly high of 49.64, as speculators are not fully convinced that this news will be enough to reduce the ongoing worldwide glut, neither latest OPEC comments pointing for a possible extension of their output cut deal until March 2018. Technically, the risk is however towards the upside, as in the daily chart, technical indicators have quickly turned north, still standing around their mid-lines, whilst an early decline met buying interest around a now horizontal 20 SMA, currently at 47.90. Shorter term, the 4 hours chart shows that indicators lack directional strength, with the Momentum stuck around 100, but the RSI aiming to regain the upside around 60 and the price holding above a bullish 20 SMA, all of which supports additional gains particularly on an advance beyond the mentioned weekly high. 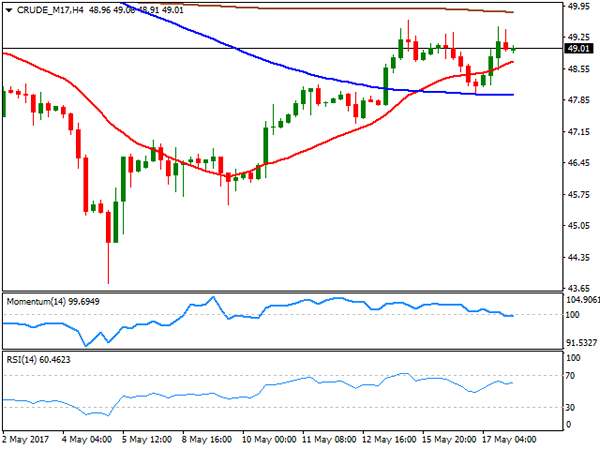 It was a bad day for equity traders, particularly for those in the US as the Dow Jones Industrial Average closed the day at 20,606.93, down by 372 points, while the Nasdaq Composite shed 2.57% or 158 points, to end at 6,011.24. The S&P fell by 43 points or 1.82%, to 2,357.03. It was the worst day for US indexes in this 2017, as the continuity of US President trump is close to be put on question, following the scaling scandals around inter-relationships with Russia. Within the Dow, financial-related equities suffered the most, with Goldman Sachs down 5.48% and JP Morgan shedding 4.04%. Only 5 members closed up, with UnitedHealth being the best performer with a measly 0.49% advance. The Dow fell to its lowest since April 21st, and holds near the mentioned close ahead of the Asian opening, with a strong bearish momentum in the daily chart supporting further declines for this Thursday, as technical indicators head sharply lower near oversold territory, whilst the index is currently aiming to break below its 100 DMA. In the 4 hours chart, technical indicators maintain their bearish momentum despite having entered oversold territory, whilst the index has broken below all of its moving averages. 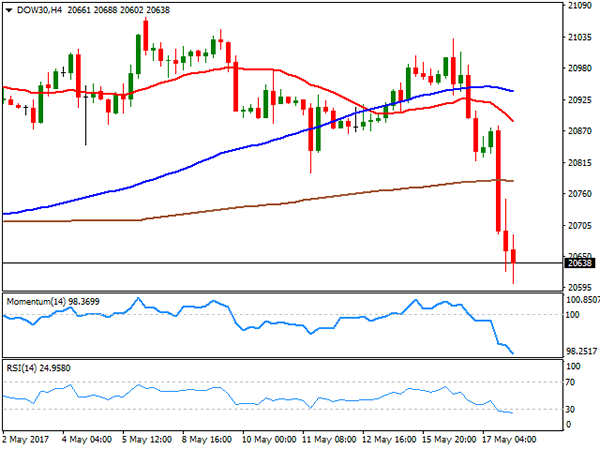 The FTSE 100 closed 18 points lower at 7,503.47, retreating from record highs on mounting risk aversion. Losses were limited as mining-related equities surged on gold demand, with Fresnillo being the top performer, adding 2.75% , and Randgold Resources up by 2.05%. Most members closed lower, with Ashtead Group being the worst performer by closing -3.82%, followed by CRH that shed 3.48%. The index fell further in after-hours trading heading into the Asian opening around 7,451. The Footsie trimmed most of its weekly gains, and the daily chart shows that technical indicators are pulling back sharply from overbought levels, supporting some additional declines. Still the index is holding far above bullish moving averages, keeping the longer term view far from bearish. In the short term and according to the 4 hours chart, the index is standing right around a bullish 20 SMA, whilst technical indicators present strong bearish slopes within positive territory, now approaching their mid-lines and in line with the longer term view. 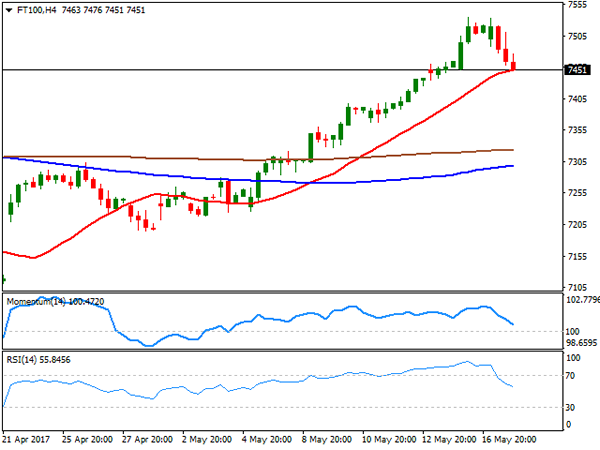 The German DAX closed at 12,631.61, down by 170 points of 1.35%, with most European indexes falling by the most in nearly 9 months, on prospects the US president will be impeached for obstructing justice, on news indicating that he asked former FBI director Comey, before firing him, to drop the investigation on Michael Flynn. The scandals surrounding the Trump jeopardize his pro-growth agenda, forcing investors to unwind bets. Within the DAX just ThyssenKrupp managed to close in positive territory, adding 2.26%, whilst financials led the way lower, as Commerzbank shed 3.90% and Deutsche Bank 3.61%. The DAX fell further in after-hours trading, dragged lower by Wall Street’s slump and currently around 12,540. The technical picture has turned bearish, as in the daily chart, the index is about to break below a bullish 20 SMA, whilst technical indicators have turned sharply lower, now pressuring their mid-lines. In the 4 hours chart, the decline accelerated below a now bearish 20 SMA, whilst technical indicators maintain their sharp bearish slopes near oversold territory. 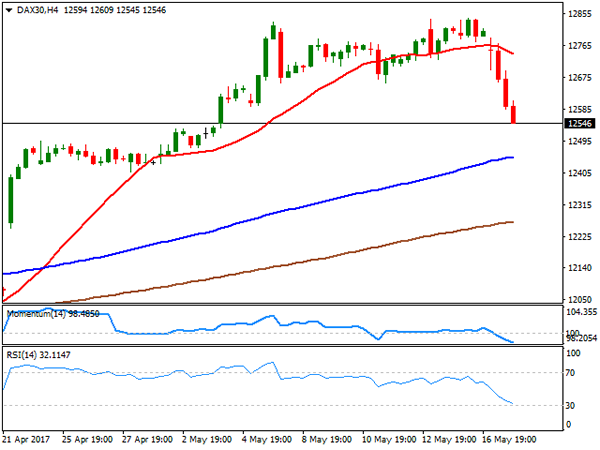