The technical indicators, however, are pointing to positive momentum in the near term. The MACD is strengthening its movement above its trigger and zero lines, while the RSI holds in positive area and is turning slightly higher. It is worth mentioning that the 20- and 40-simple moving averages (SMAs) created a bullish cross in the daily chart, confirming the recent upside move in the very short-term.

In case of upside movement, gains could follow until the 38.2% Fibonacci mark of 0.8715 which stands near the 0.8725 resistance barrier. Even higher, a climb could increase bullish sentiment until the 50.0% Fibonacci of 0.8790.

A drop below 0.8470, would turn the short and the medium-term outlook into bearish, while a climb above 0.8715 would bring the bullish view into play only in the short term. 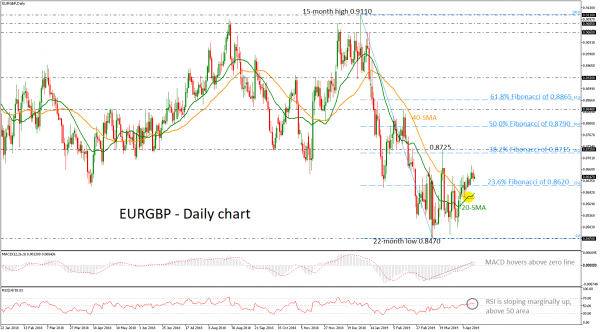