GBPAUD is edging slightly higher after the pullback on the 23.6% Fibonacci retracement level of the upleg from 1.7220 to 1.8880 near 1.8485. The RSI is flattening around the neutral threshold of 50, while the stochastic oscillator is moving near the oversold territory. However, the 20- and 40-simple moving averages (SMAs) in the daily chart posted a bullish cross despite the latest bearish movement.

On the upside, the price could touch once again the 35-month high of 1.8880, while a successful climb above this barrier could increase bullish sentiment until the significant psychological barrier of 1.9000.

Overall, despite the latest rebound since yesterday, GBPAUD seems to be in negative correction after the downfall from 1.8880. However, if the price remains above the short-term SMAs, investors could turn their interest to the upside again. 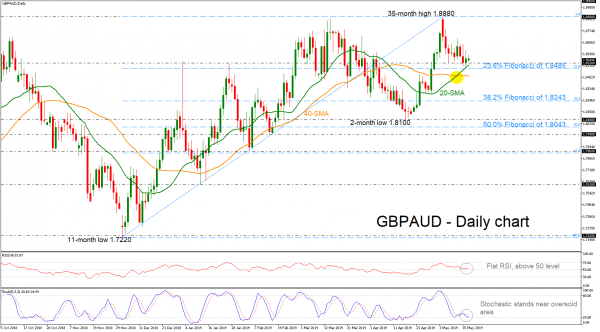