The price was capped by the 20-day moving average, which is acting as a strong resistance obstacle, while the technical indicators are moving lower. The RSI is pointing down in the negative area, while the stochastic oscillator created a bearish crossover within the %K and %D lines in the overbought zone, signaling more losses in the near term.

In the positive scenario, if the price successfully jumps above the 23.6% Fibonacci and the 20-SMA, it could find immediate resistance around the 40-SMA currently at 111.05. Also, buyers could drive the market until the 111.70 region, taken from the latest highs, ahead of the four-month high of 112.40.

In the medium-term view, the outlook has turned neutral after the rebound on 109.00. A new bullish phase could emerge above 112.40, while a drop below 107.80 would open the door for selling orders. 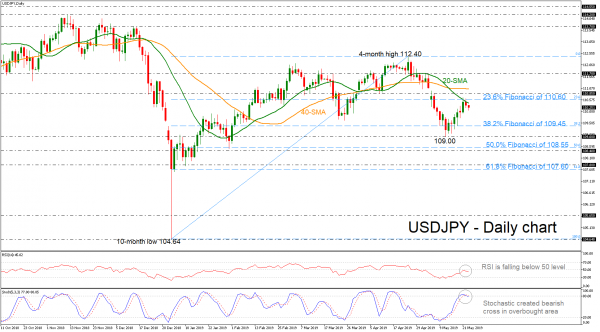