EURAUD is extending its gains over the last couple of weeks, recording a fresh more than five-month high around 1.6350. Thus, the short-term picture thus seems to be strongly positive, as the RSI is hovering in the overbought territory and the MACD is strengthening its momentum above trigger line.

A break above above the ascending channel could increase speculation for more upside pressure towards the 1.6590 resistance level. If the bulls pierce the latter too, attention would turn to 1.6662.

A potential pullback in the market may meet initial support near 1.6260. Another downside break would open the way for the 20-day simple moving average (SMA) currently at 1.6180 and near the blue Kijun-sen line. Next, the price could reach the 40-day SMA around 1.6090 before resting near the 1.6050 support level.

Summarizing, the medium-term picture is bullish as the pair has been trading higher over the last six months 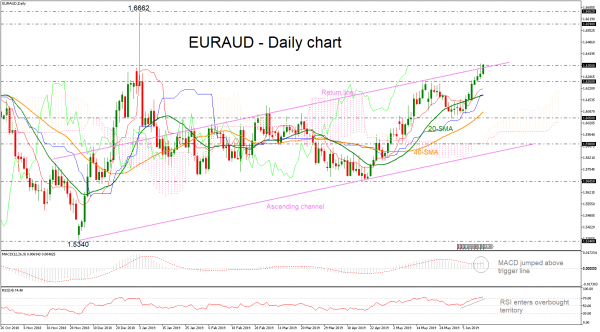