GBPAUD slid into a four-month trading range on February 19, with lower boundary of 1.8115 and an upper boundary of 1.8865, which two weeks ago, was broken aggressively to the downside, initially finding support at 1.7870. A pullback last week has sellers again reloaded for another test.

The short- and medium-term simple moving averages (SMAs) of 14 -, 21- and 40-day SMAs, have widened, confirming the negative trend which is restarting. The MACD flattened on the pullback, though has not crossed above the trigger line. Likewise, the RSI is in tandem with the down move and nears the 30 level, pointing down. The ADX stands at 29 concurring with the bearish bias trend.

If sellers persist to take control, an immediate test of the support of 1.7870 would need to be broken for the bearish momentum to keep on. Enduring such behavior would prompt a test of the uptrend line around 1.7700, ahead of the 1.7610 support. Added negative momentum could invoke losses towards the eleven-month low of 1.7207, shifting the long-term ascending movement to descending.

However, congested resistances do exist on the way back up. For chances of a shift to the upside in the short-term, buyers would need to push the pair ultimately above 1.8040 – 1.8115 to rest near the 1.8420 resistance, taken from the latest high.

In conclusion, GBPAUD has been in the short-term, negative, but nevertheless, the medium- and long-term outlook remains positive. 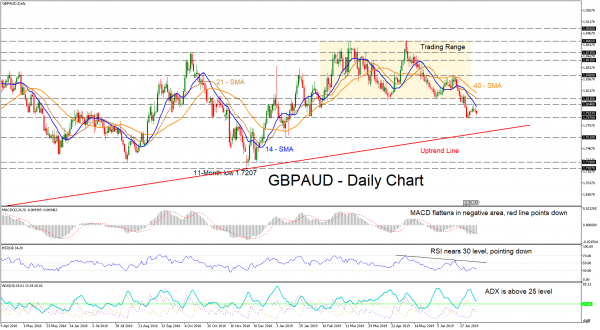