A short-term buyer’s pullback from a 5-month low generated a few days ago, of 15.5395, had the pair move north to tackle the heavyweight 50-day simple moving average (SMA), coupled with the cloud of the Ichimoku indicator. Nevertheless, some consolidation seems to have come in the last sessions.

The MACD crossed above the zero line and is pointing up, whilst the RSI seems to have hit previous highs and turned slightly down after the previous positive divergence that helped to move up in the short-term. The ADX is still showing strong up trend.

In a negative scenario, the strengthened obstacle of the 50-SMA and Ichimoku cloud would need to hold, pushing the price back down to test initial support of 15.6150. Next level would be the five-month low of 15.5395, which if fractured, could see the short- to medium-term bearish bias continue.

Overall the short- and medium-term seem to still be bearish, although if there is a shift to the upside, passing the resistance of 15.95, a bullish bias would take control. 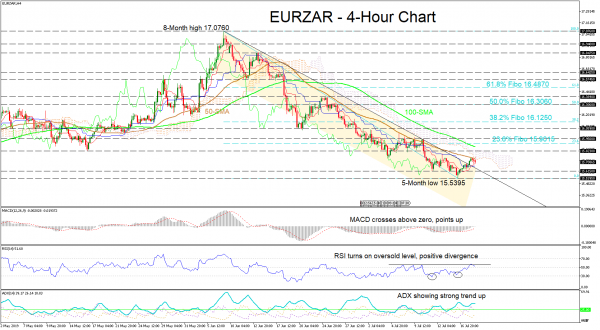