The UK100 stock index recorded its best daily gain in more than three years on Monday, while early on Tuesday the market opened even higher to top at 7728, the highest price since last August.

According to the stochastics, there is still some room for improvement as the indicator is positively sloped and has yet to print a bullish cross above its 80 overbought mark. The MACD is picking up steam as well and is above its red signal line, increasing optimism for another bullish session ahead.

Resistance to upside movements could be detected around last summer’s peaks of 7,790 if the market continues its rally. Crawling further up, the bulls would have to face next the 2018 high of 7,900.

In case of a downside reversal, the focus will shift to the 7,600 former resistance level, while a fall under the 20-period simple moving average (SMA) may find support near the 7,460 barrier. Yet, the downfall would be seriously considered if the bearish action extends below the ascending line drawn from the 6,535 low (December 2018). Such a move would also switch the bullish medium-term profile into a bearish one, but the rising 50-day SMA suggests that an outlook reversal may rather come with a delay.

In brief, the UK100 stock index is facing stronger bullish pressures both in the short- and the medium-term picture 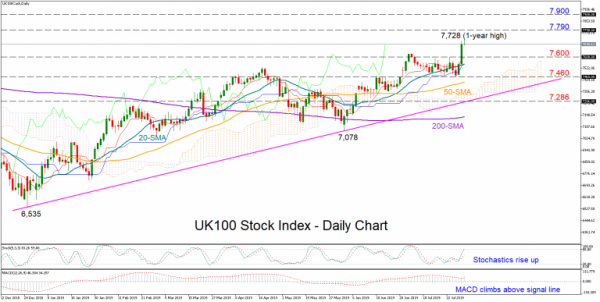