The Kiwi dollar jumped from new over 3 ½ year low (0.6361) in early Friday’s trading, following better than expected New Zealand Q2 retail sales and comments of RBNZ Governor, who said that the central bank can wait on monetary policy decision after last month’s 0.5% cut.

Kiwi was relieved by comments that cooled down expectations the central bank would maintain aggressive approach to the monetary policy, however, recovery action is seen limited on expectations that Fed Chairman Powell, in his speech later today in Jackson Hole symposium, would signal that the US central bank has not entered extended policy easing cycle.

Falling 10DMA (0.6417) marks solid resistance ahead of falling 20DMA (0.6474), which is expected to cap and offers better opportunities for re-entering bearish market. 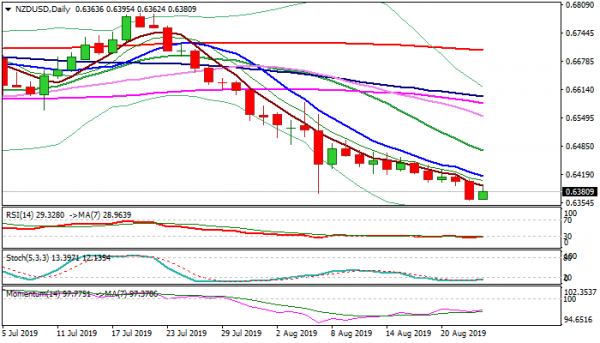