AUDUSD has rallied above the 21- and 42-day simple moving averages (SMAs), up to the Ichimoku cloud, after the bears were unable to capitalize from the multi-year lows it re-tested earlier this month. Tackling 0.6880, which is the 50.0% Fibonacci retracement level of the down leg from 0.7081 to 0.6676, buyers are looking to take back more losses from the drop which started on July 19.

The MACD has distanced itself from its red trigger line moving marginally into the positive region, while the RSI after rising into bullish territory has flattened. Noteworthy, is the bullish cross of the Tenkan-sen and Kijun-sen lines, whose slopes have merged with the recent up-turn in the 21-day SMA.

Overall, the downward sloping 42-,100- and 200-day SMAs are countering the growth of a bull market. For the positive picture in the short-term to be confirmed, the price would need to overcome the peak of 0.7081. 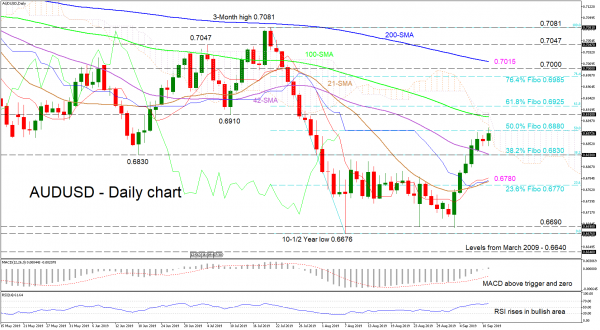