Silver looks to be shifting to a bearish bias as it moves below the swing low of 16.85 from August 19. The commodity’s bearish state seems to be backed by the downward slopes in the Ichimoku lines and the 20- and 40-day simple moving averages (SMAs), with the 40-day SMA nearing a bearish cross of the 100-day one.

Furthermore, the technical indicators reflect strong negative momentum in place, with the RSI currently in oversold territories, while the MACD is accelerating below its red trigger line in the negative region.

If buyers deny more losses and push the pair higher, initial resistance could come from the 17.15 level, where the Tenkan-sen line is located. Moving higher, the 17.36 resistance coupled with the 20-day SMA, could interrupt the test of the 17.70 area where the 40- and 100-day SMAs reside. Another push higher could encounter the swing high of 18.21 and the nearby 23.6% Fibo of 18.36.

Summarizing, the short-term bias is cautiously bearish. A break below 16.53 would reinforce belief in the decline, while a close above 17.36 could return a neutral bias. 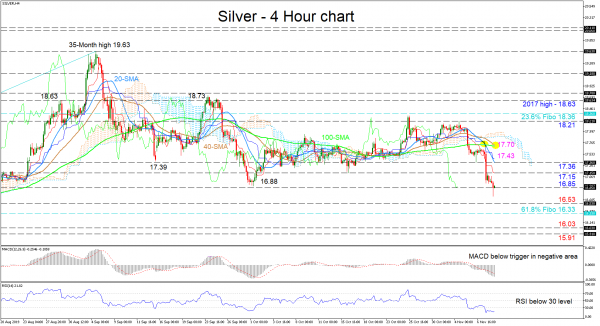 Silver: White Metal Extends Its Losses In The Morning Session

Silver: White Metal Trading On A Stronger Footing This Morning