Spot gold remains in bearish mode and pressuring Monday’s new 13-week low at $1448, which lays just above key Fibo support at $1445 (38.2% of $1266/$1557 ascend. The metal’s price holds in red for the fourth consecutive day and was down nearly 5% last week as renewed risk appetite on hopes for the deal in phase 1 of US/China trade talks, prompted investors out of safe-havens. Bearish daily techs support the notion of deeper correction of $1266/$1557 upleg, which requires firm break below $1445 pivot for confirmation. Oversold daily stochastic warns of hesitation at $1445 pivot, with bears expected to remain intact while the price holds below daily cloud base (1478). Traders await President Trump’s speech, due later today, expecting Trump to confirm de-escalation of trade conflict, which has already caused big global damages. Positive tone from President Trump would further boost risk mode and send gold lower, however, traders are cautious over possible tariffs on European goods, as President Trump threatened earlier. 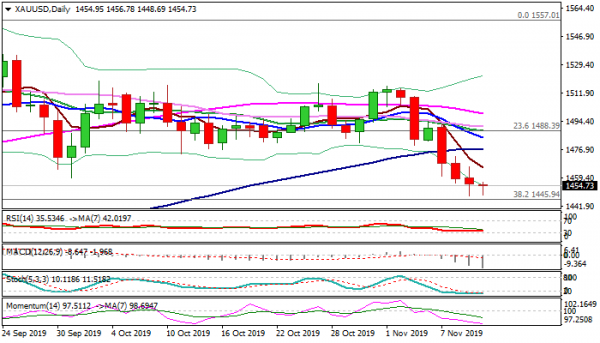