EURCHF is holding to losses for the third week in a row, dropping to a 33-month low of 1.0758 earlier today. The sharp sell-off has driven the pair beneath the six-month trading range of 1.0810 – 1.1055, turning the outlook from neutral-to-bearish.

In the very short-term, the market could maintain a downward move if the RSI keeps moving in the oversold zone and the MACD extends its momentum below the trigger line. Regarding the trend, the 20-day simple moving average (SMA) continues to lose strength below the 40-day SMA.

Should the pair stretch south, the 1.0655 low, registered on April of 2017 could provide some support before the price meets the 1.0620 support, identified by the trough on February 2017.

Alternatively, in the event of an upside reversal, it could find immediate resistance near the 1.0780 barrier. If traders continue to buy the pair, the price could rise until the 1.0830 region and the 20-day simple moving average (SMA) currently at 1.0845. Even higher, the 1.0900 psychological level could attract traders’ attention.

To sum up, the market is expected to hold bearish in the short- and medium-term after the penetration below of the consolidation area on Tuesday. 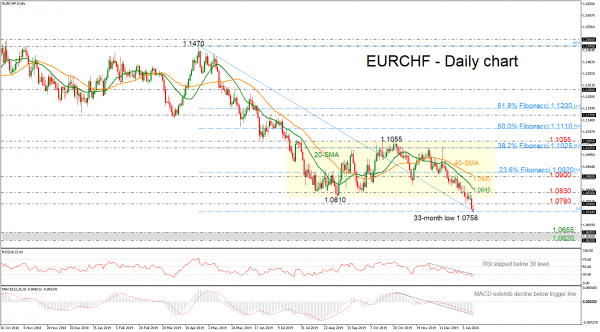