Japan 225 stock index (cash) has run out of fuel in its second attempt to overtake the 24,186 level – which is the 261.8% Fibonacci extension of the pullback from 22,252 to 21,054. The recent stall in the up move can also be seen in the flattening of the Bollinger bands and the RSI, which is in the bullish territory.

The short-term oscillators reflect mixed signals of momentum while the simple moving averages (SMAs) lean towards an improving picture. The MACD is rising above its red trigger line in the positive zone, while the Stochastics – although in overbought territory – demonstrate some weakness to the upside.

Summarizing, a neutral-to-bullish bias exists in the short- and medium-term, with a break of 24,186 reviving the ascent. 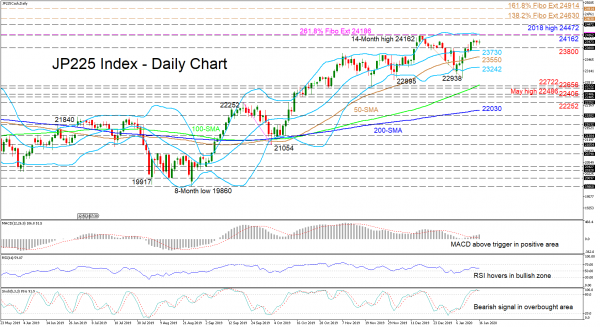