WTI oil futures is creating positive 4-hour sessions after the bounce off the three-month rising trend line and the 50.41 significant support level. The commodity today has advanced to the nearby Ichimoku cloud’s upper band around the 23.6% Fibonacci retracement level of the bearish movement from 59.62 to 49.29 at 51.74.

The short-term oscillators suggest an increase in positive momentum for now. The RSI indicator is approaching the bullish region, while the %K line of the stochastic oscillator entered the overbought zone and the %D line is following this action. However, the potential bearish crossover within the 20- and 40-period simple moving averages (SMAs) could act as immediate resistance for traders before heading even higher.

Otherwise, in case of declines, the price could find support at the 50.41 key barrier. The next hurdles could come from below the diagonal line, suggesting negative momentum, hitting the 49.90, 49.60 and the 13-month low of 49.29 levels.

Briefly, the very short-term bias has turned bullish and more positive actions would be created above the moving averages. 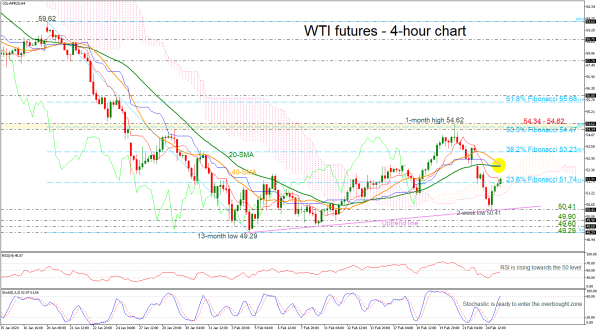