Majors started the week in slow motion, as a holiday in Japan, combined with a scarce macroeconomic calendar, sent investors to the sidelines ahead of first tied data to be released later this week, including among others, the ECB monetary policy decision. The American dollar closed mixed, although not far from its Friday’s closing levels and looking vulnerable across the board. The EUR/USD pair fell to a daily low of 1.1434, but recovered towards its recent highs near 1.1490, ending the day a few pips below this last. In the data front, EU June inflation was confirmed at 1.3% yearly basis, down from 1.4% in May, remaining unchanged in the month. In the US, the Empire State manufacturing survey showed that business activity grew by less than expected in July, with the index down to 9.8 from 19.8 in July and the expected 15.0.

From a technical point of view, the pair retains its long-term positive tone, but remains unable to confirm a bullish breakout, still struggling around 1.1460, from where the pair retreated multiple times since January 2015. In the 4 hours chart, the pair met buying interest on an approach to a flat 20 SMA, while the RSI indicator aims higher, currently around 63, but the Momentum lost upward strength, holding anyway within positive territory. An upward acceleration through 1.1490 should see an upward extension towards 1.1615 May 2016 high, while beyond this last the next level to watch is 1.1713, August 2015 high. 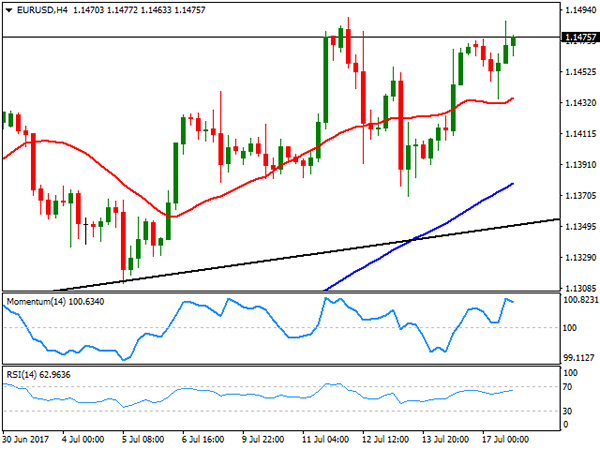 The USD/JPY pair posted a modest advance this Monday, ending the day at 112.63, and having met selling on an advance up to its 200 DMA, around 112.90. The JPY saw little action at the beginning of the week as Japan banks were closed on a local holiday, with the main event scheduled for this week being the BOJ’s monetary policy meeting early Thursday, but no big surprise is expected from Kuroda this time. US Treasury yields traded marginally lower daily basis, indicating a possible yen recovery for the upcoming sessions. In the meantime, the pair continues finding support around 112.30, the 38.2% retracement of the latest bullish run, and below the mentioned 200 DMA, with the scale lean towards the downside. In the 4 hours chart, the early advance was unable to surpass a still bullish 20 SMA, while technical indicators have retreated from their mid-lines, supporting a bearish extension on a break below the mentioned Fibonacci support and with scope then to test the 111.60 region. 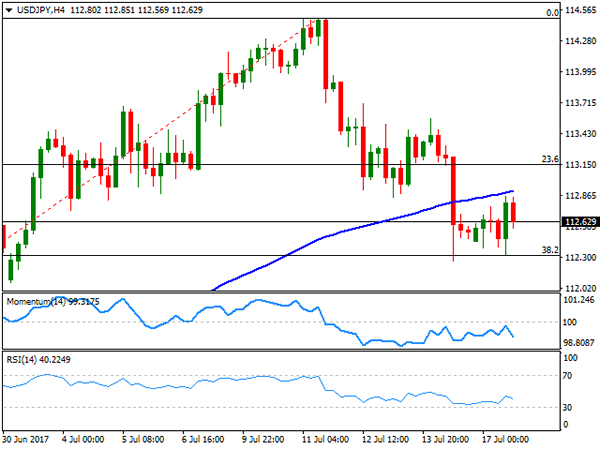 The GBP/USD pair gave back some of its Friday’s gains, but closed anyway well above the 1.3000 level. There were no relevant macroeconomic releases in the UK, but things will get more interesting in that front this Wednesday, with the release of inflation at consumer and factory levels for June. Additionally, BOE’s Governor Mark Carney is due to  unveil the new £10 note featuring Jane Austen, in Hampshire, and while he will probably offer a speech, seems unlikely he will discuss monetary policies in such event. From a technical point of view, the intraday decline remains as corrective, as price remains above the 23.6% retracement of its latest bullish run from 1.2811 to 1.3113 at 1.3040, the immediate support and the level to break to confirm further declines during the upcoming sessions. In the 4 hours chart, technical indicators have corrected extreme overbought conditions, heading modestly lower within positive territory, whilst the 20 SMA maintains its bullish slope below the current level, converging with the 38.2% retracement of the mentioned rally at 1.2295, a probable bearish target in the case of further Pound’s weakness. 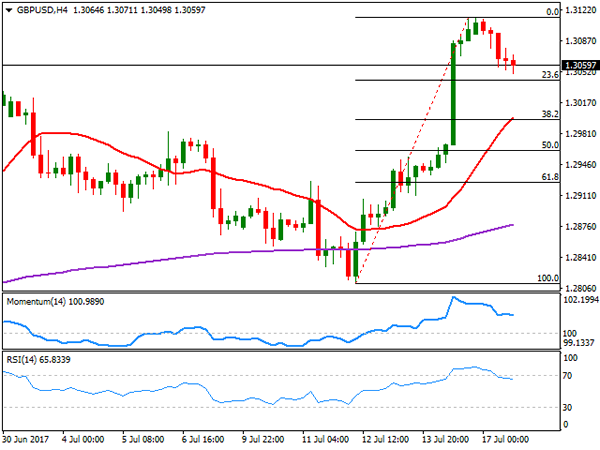 Gold prices continued advancing this Monday, with spot surging to $1,234.52, its highest since June 3rd, still backed by speculation that the US Federal Reserve will likely have to pause its rising rate policy after one more hike this year. Despite the US released just a minor manufacturing reading,  the NY Empire State index, the disappointing number was enough to feed demand for the base metal. The daily chart shows that the price advanced above a still bearish 20 DMA, while holding well below the 100 DMA, this last around 1,258.00, while technical indicators have advanced within negative territory, nearing their mid-lines, suggesting that the commodity may extend its advance on Tuesday. In the 4 hours chart,  the price has advanced above its 20 and 100 SMAs, with the shortest advancing below the largest, whilst technical indicators have turned flat after entering overbought territory, maintaining the risk towards the upside. 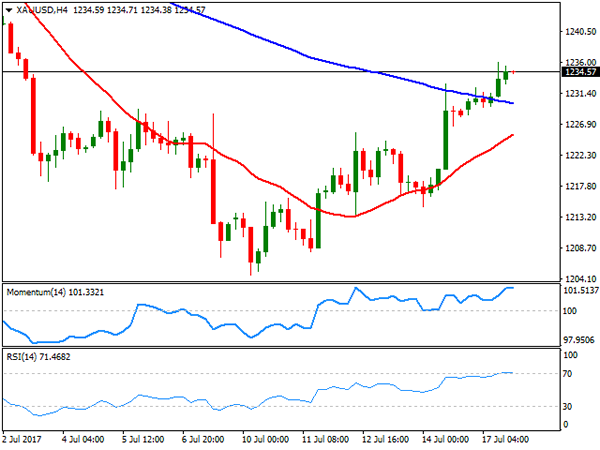 West Texas Intermediate crude oil futures trimmed all of its Friday’s gains, closing the day at $46.05 a barrel, undermined by speculation of a monthly raise in US shale-oil production. The black gold advanced up 46.85 intraday, stalling short of the 50% retracement of its latest decline between 51.98 and 42.04 at 47.00, now nearing the 38.2% retracement of the same rally at 45.90, the immediate support. In the daily chart, the 20 DMA maintains its bullish slope below the current level, but technical indicators turned lower and are currently crossing their mid-lines towards the downside, indicating a possible bearish extension ahead, particularly on a break below the mentioned support. In the 4 hours chart, he price is a few cents below its 20 SMA, whilst technical indicators also retreated from near overbought readings towards their mid-lines where they lost bearish strength, also indicating that a bearish extension is likely on a break below the mentioned key support. 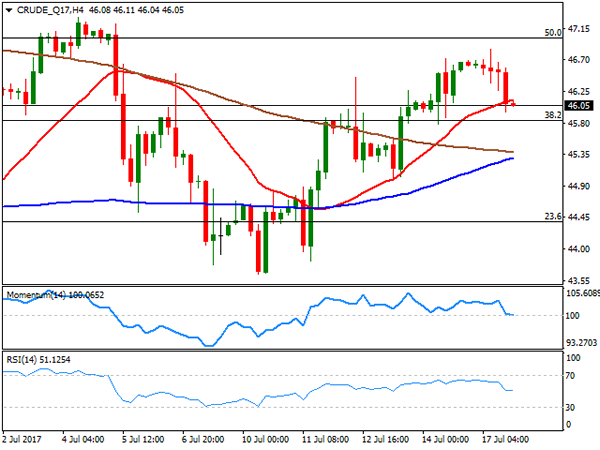 US indexes closed mixed, but little changed this Monday, with only the Nasdaq Composite posting a modest advance of 2 points, to close at 6,314.43. The Dow Jones Industrial Average closed at 21,629.72, down by 8 points, whist the S&P ended at 2,459.14, down 0.01%. Ahead of big earnings reports releases later this week, the indexes hold near record highs, boosted by hopes that the US Federal Reserve will have to slow its tightening pace. Within the Dow, Microsoft led advancers with a 0.78% gain, while the worst performer was JP Morgan that closed down 0.98%. The daily  chart shows that the index remains far above all of its moving averages that maintain their bullish slopes, whilst technical indicators have retreated modestly, holding anyway near overbought readings. In the 4 hours chart, the 20 SMA heads north around 21,596 while technical indicators corrected overbought readings, but remain well above their mid-lines, suggesting the index may correct lower short-term, within a dominant bullish trend. 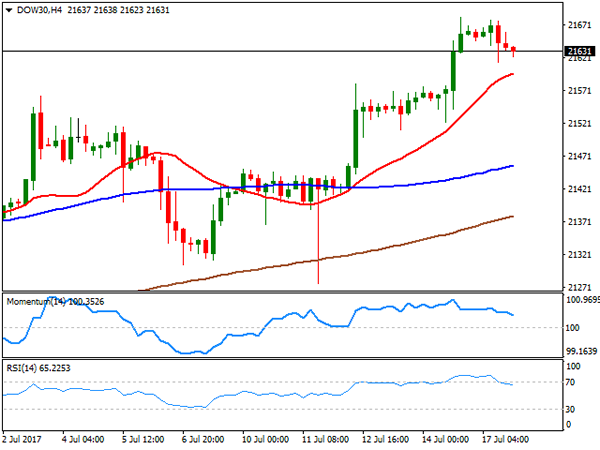 The FTSE 100 closed 25 points higher at 7,404.13, lifted by gains in the mining sector and a weaker Pound. Mining-related equities got a boost from positive news coming from China, with most big names, as Anglo American, Glencore, and BHP Billiton adding over 1%. The best performer, anyway, was Ashtead Group that added 3.42%. Imperial Brands was the worst performer, down 1.63%, followed by Experian that lost 1.51%. In the meantime, over 40% of businesses in the UK said that fears over the UK’s future relationship with the EU after the Brexit has affected their investment decisions, according to a CBI survey, somehow anticipating that the latest recovery won’t see follow through during the upcoming sessions. In the daily chart, the index has closed the day around a bearish 20 DMA, while technical indicators maintain a neutral stance, hovering directionless around their mid-lines. In the 4 hours chart, the outlook is also neutral, as the index is a few points above a bullish 20 SMA, while technical indicators turned lower around their mid-lines, with no clear directional strength. 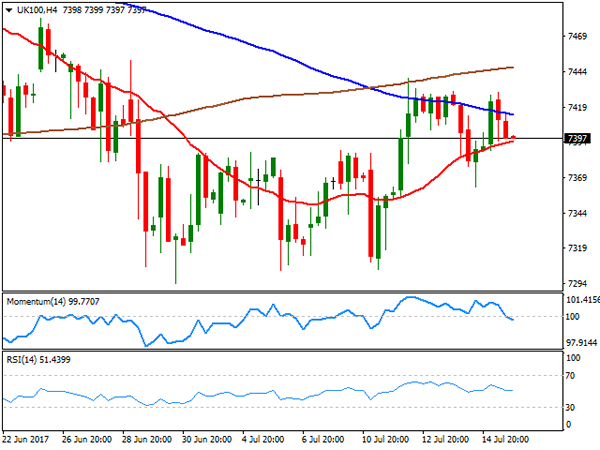 European equities closed mixed, with the German DAX down 44 points or 0.35%, to 12,587.16. Most sectors closed lower, with only eight members up, led by Deutsche Lufthansa that added 2.28%, after the company reported earnings before interest and taxes of €1,042 million in the first half of 2017. Deutsche Boerse was the worst performer, ending the day 1.53% lower, followed by Merck that lost 1.50%. The daily chart for the index shows that it retreated towards its 20 DMA that presents a modest bearish slope, while the 100 and 200 DMAs remain well below the shortest, whilst technical indicators hover around their mid-lines, with no clear directional strength. In the 4 hours chart, the index settled above all of its moving averages, now a few points below a bullish 20 SMA, whilst technical indicator extended their slides, with the Momentum indicator having entered negative territory and the RSI indicator around 52. The index could extend its decline on a break below 12,542, Friday’s low, and a strong static support area, as it presents multiple intraday highs and lows around the level in the past few weeks.