US 500 index (Cash) seems to have lost steam in its pullback from the multi-year low of 2,183.95 dropping the price back to its mid-Bollinger band around the 100-period simple moving average (SMA) at 2,561.

The stall in positive momentum is also reflected in the short-term oscillators. The MACD, in the positive region, has dropped below its red trigger line, while the RSI, declined to hover above its neutral mark. On top of this, the downward sloping 100- and 200-period SMAs continue to aid a bearish picture. That said the bullish stochastics, with room to improve and the flattened 50-period SMA are attempting to breathe fresh confidence into a positive move.

Overall, a negative bias in the near-term continues to exist below the 2,708 level and more importantly below 2,887. 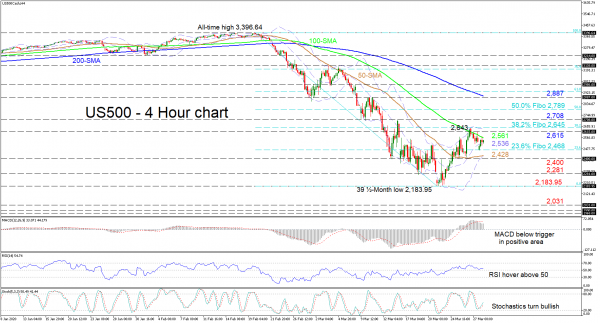