Gold prices are moving towards the latest high – being the seven-and-a-half-year high of 1,765 – continuing the upside move after the bounce off the 1,725 support level. The price holds above the mid-Bollinger band and the RSI keeps rising above the 50 level. Also, the MACD oscillator is trying to create a bullish cross with its trigger line in the positive area, suggesting more gains in the very short-term.

If the price continues the upside tendency, it could hit the upper Bollinger band at 1,760 before meeting the 1,765 resistance. Even higher, the 1,796 resistance, taken from the high on October 2012 would attract attention, ahead of the next critical level at 1,925, achieved on September 2011.

A drop lower could open the way for the 40-period simple moving average (SMA), which overlaps with the lower Bollinger band and the 1,722 – 1,725 support. Steeper declines could find support at the 100-period SMA at 1,711, while more losses could open the door for the 1,692 support.

In the medium-term window, the picture looks bullish after the pullback on the 1,451 hurdle and only a slip beneath the 1,600 handle would shift the outlook to bearish. 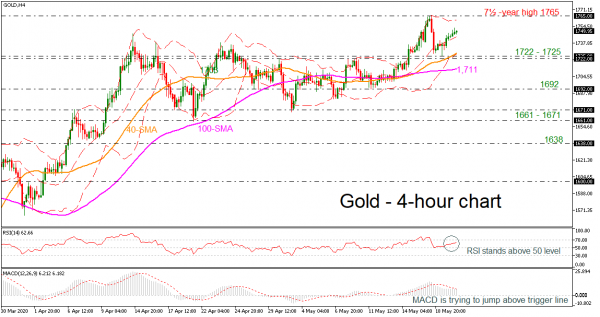