Palladium futures have consolidated below the 1,853 level, that being the 50.0% Fibonacci retracement of the up leg from 1,353 to 2,354, after yesterday challenging the bottom of a one-month trading range.

The latest negative push within the range has some backing from the bearish overlaps of the mostly horizontal 200-period simple moving average (SMA) by the downward sloping 50- and 100-period ones. Nevertheless, the negative bearing within the short-term oscillators has paused and thus a bounce from the foundation of the range cannot be ruled out. The MACD, in the negative region, has flattened below its red signal line, while the RSI, after a momentary dip in oversold territory has pushed above the 30 mark.

Should the bounce on the lower boundary of the range push above the immediate 50.0% Fibo of 1,853, the 1,892 level (previous support-now-resistance) could hinder early positive moves. Buyers then face the congested SMAs from 1,911 – 1,944 ahead of a resistance region from the 1,959 high to the 38.2% Fibo of 1,972. If buying interest overruns these obstacles, the climb may encounter the nearby 1,995 barrier as the price targets the ceiling of the range at 2,055.

In the event that sellers manage to break under the foundation of the sideways move at 1,827, the tough 1,772 border could impede the price from stretching lower. That said, if it fails to do so, the 61.8% Fibo of 1,736 and the 1,727 obstacle – both forming troughs in May – could challenge the decline ahead of the 1,684 barrier in March.

Concluding, the commodity remains neutral within a very short-term range of 1,827 – 2,055. Yet, a break either above 2,156 or below 1,727 could cement a clear direction in the short-term timeframe. 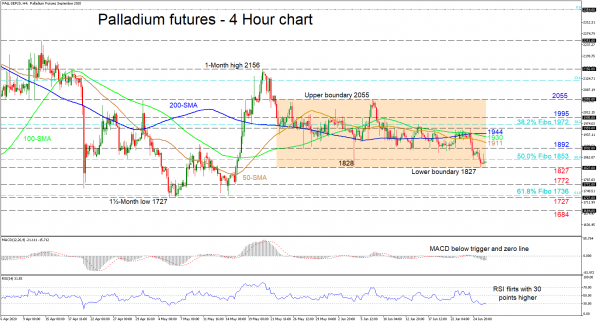 CFTC Commitments of Traders – Bets on Crude Oil Trimmed on Both Sides. Yet, Net Length Soared