EURCHF today encountered heavy resistance from the 100-period simple moving average (SMA) residing at the Ichimoku cloud’s upper band at 1.0700. As a result the price has retreated back below the 200-period SMA and has strengthened a short-term neutral-to-negative picture. The Ichimoku lines reflect the somewhat recent edging sideways in the price, while the short-term oscillators promote further declines.

The stochastic oscillator is negatively charged after a bearish crossover by the %K line was completed out of the overbought region. The MACD, in the positive zone, has declined to its red signal line at the zero mark, while the RSI continues to weaken, falling under the 50 mark.

Should price remain below the cloud and extend under the 50-period SMA at 1.0662, first limitations could occur at the 1.0623 trough. Further loss of ground could be challenged by the 1.0587 – 1.0575 critical support section, which if breached could spark fears of the bigger negative picture returning, as the price heads for the 1.0545 obstacle.

Summarizing, the very-short term picture remains neutral-to-bearish below 1.0722 and a violation of the 1.0623 trough may trigger worries of a reinforced negative picture. 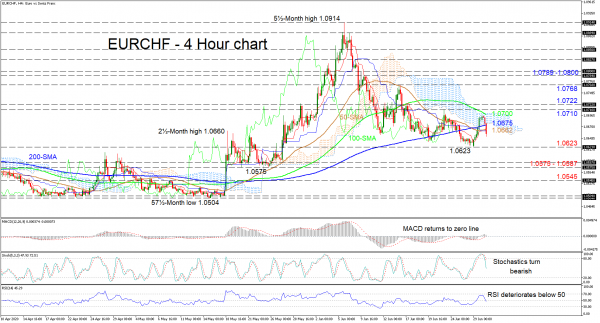