Gold finished Friday’s session in the red after pulling slightly below its new record high of 2,079, but overall managed to add another constructive week for the ninth consecutive time.

In the daily chart, technical signals remain cautiously bullish. The RSI hit a wall near its previous high in the overbought zone and reversed south, the Stochastics are also pointing downwards after printing a lower high, while the MACD, although above its red signal line, seems to be losing momentum. Moreover, Friday’s market activity seems to have taken the form of a bearish engulfing candlestick, which is a bearish sign that weakness may persist in the short-term.

The red Tenkan-sen line around 2,000 is currently seen as an important immediate support, hence whether the precious metal can continue its downside correction may depend on that line. If it gives way, the price could meet the 20-day simple moving average (SMA) near the 1,939 barrier. Lower, the price may print a lower low near the ascending trendline, a break of which could create more serious concerns about the ongoing uptrend, likely generating a more aggressive decline towards the 1,789 restrictive region as a result.

In the bullish scenario where the price refuses to drop below 2,000, gold may search for higher highs above the 2,079 peak. Likely the spotlight could be initially near the 2,100 psychological mark and then around 2,150 in this case.

Summarizing, gold seems to be trading at the edge of the overbought zone, making declines more possible. Yet, any downside move could just be a correction in the uptrend – if the 2,000 and 1,939 levels add floor. 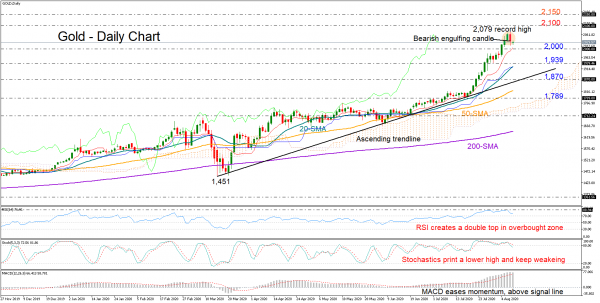 Gold Advances For A Second Day

Market Morning Briefing: Euro Bounced Back Sharply But While Below 1.1778