EURUSD appears to have consolidated its advancements between 1.1695 and 1.1915, despite existing positive signals. In the meantime, the price is engaging the Ichimoku clouds upper band at 1.1842, while the 50-period simple moving average (SMA), the cloud and Ichimoku lines, sponsor a horizontal bias.

Nonetheless, the short-term oscillators and the bullish tone of the 50- and 100-period SMAs, promote further improvements. The strengthening MACD has risen above its red signal line and the zero mark, while the RSI is trying to gain ground in bullish territory. Additionally, the stochastic oscillator has climbed into the overbought zone, but has yet to signal signs of weakness.

Overall, the very-short-term picture is holding a neutral-to-bullish tone above 1.1695. A break either above 1.1915 or below 1.1695 could reinforce the next relevant course in the pair. 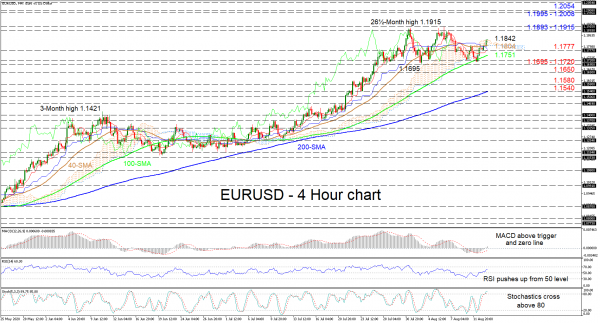