Short term Elliott Wave View in Copper (HG) indicates that the metal has ended the rally from March 19 low at $3.218. The entire rally is unfolding as a 5 waves impulse structure. The 5 waves move higher ended wave ((1)) at $3.218. Wave ((2)) pullback is currently in progress to correct cycle from March 19 low in the sequence of 3, 7, or 11 swing before the rally resumes.

Near term, as far as pivot at $3.218 high stays intact, expect rally to fail below there in 3, 7, or 11 swing for further downside. The larger degree structure as explained in the video suggests the metal has broken higher from multi decade consolidation which implies a bullish outlook. Thus, the anticipated correction/pullback in wave ((2)) is within the context of a bullish market. 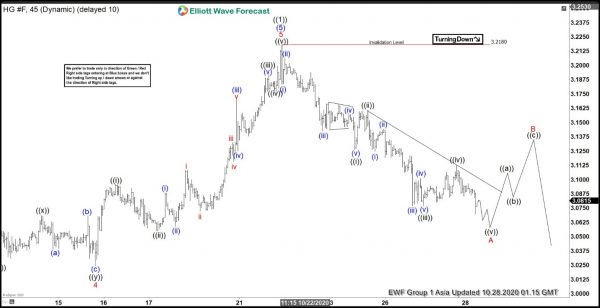